Industry giant EA isn’t satisfied with dominating the premium iPhone game market with App Store blockbusters like The Sims 3 [App Store], Need For Speed Undercover [App Store], Tiger Woods PGA Tour [App Store], and other titles which have all flirted with various positions on the top sales charts. EA is now setting its sights on the 99¢ market, which is where their new “micro-studio", 8lb Gorilla comes in.

8lb Gorilla is a team of twenty-something year old developers set loose by EA executives, in their words, “on an island" to develop indie-style simple pick up and play iPhone games. These 8lb gorillas, backed by EA (the 800lb gorilla) plan on releasing these bite-sized games on a near-monthly basis, pending no delays with the App Store submission process. 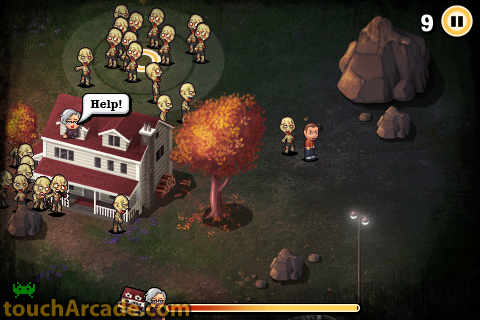 Their first entry in to this market is Zombies & Me. Instead of taking place in a post-apocalyptic world, the game is set during the apocalypse. Zombies are rising from the ground and the military is throwing down missiles left and right to try to fend off the attack. You play as Guy, and are tasked with the duty of protecting your grandmother who stays inside her house and periodically shouts various things at you. 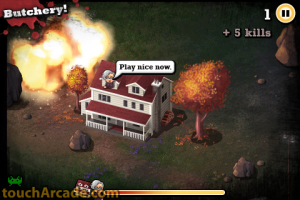 According to 8lb Gorilla, the average play tester was able to figure out how to play Zombies & Me within 5-10 seconds, and they weren’t kidding– The controls couldn’t get more simple. Tapping the screen determines where Guy moves, and the goal of the game is to round up the zombies that chase after you and position them under one of the missiles.

Initially only dealing with a few zombies, the longer you play, the higher the panic level gets. As the panic level rises, more zombies appear until eventually you are running from swarms of dozens of zombies desperately trying to find an incoming missile to destroy them.

The gameplay is on par with what you would expect for a 99¢ game, and the overall production value of the game is in line with other EA titles. Zombies & Me is due out on the App Store “very soon", and needless to say, we’re not only anxious to see what other games the 8lb Gorillas come up with, but also how the gaming community as a whole reacts to EA encroaching on turf previously claimed by indie developers.