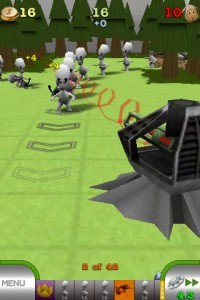 Limbic Software’s previously announced TowerMadness game has arrived in the App Store [link]. TowerMadness is an open map tower defense game that offers a zoomable 3D camera that lets you follow the action from various perspectives.

Like all tower defense games, the objective is to defend your base (in this case herd of sheep) from the waves of enemies (aliens). TowerMadness offers 16 different enemies consisting of aliens, bugs, and flying vehicles of varying sizes and strengths. Each enemy destroyed provides you more money to buy new towers and upgrade existing towers. If you let too many enemies through the game is over.

The 3D engine allows you to easily view the action from overhead or pinch all the way down for a first-person view of the action. So you can literally watch aliens walking down the path and get a close inspection of the weapons. Visually the 3D engine works well and played smoothly on both the iPhone 3G and iPod Touch 2G, and the character graphics were adequate. While the zoomable 3D landscape works well, I’m not sure how much it really adds to gameplay. I suspect most players will simply find a comfortable zoom level and stick with it throughout the duration of the game.

The game comes with 4 maps categorized by difficulty (Easy, Medium, Hard, Madness) as well as the potential for additional downloadable content. Limbic Software has already included one additional downloadable map called “Sandbox" which allows you to test different strategies with practically unlimited funds. None of the maps, however, include an “unlimited" mode which may limit replayability once you master the included levels.

The game’s controls are demoed in the above video by the developer and worked well in practice. Tapping on a location brings up a menu that allows you to select which towers to buy. Limbic also includes an extensive “Towerpedia" reference in the game which details all the attributes of each tower and their upgrades. Meanwhile, tapping and holding on a tower in-game will bring up a quick-reference. The game includes 9 different towers with 5 upgrades each, but only a subset of weapons may be offered depending on the map.

Aside from the 3D viewpoint, one somewhat unique feature the game offers is the ability to replay the games of others on the online high score list. (We’ve previously seen a similar feature in Jason Rohrer’s Passage game.) The system works quite well with the ability to playback games at up to 8x speed. For a game like this, however, I would recommend not watching the replays, especially on levels you haven’t solved yourself. Knowing the optimal solution to a map basically ruins most of the fun of playing an open-map tower defense game which tends to involve a lot of trial and error.

TowerMadness offers a somewhat fresh perspective on the tower defense genre which has become a very popular genre on the iPhone and iPod Touch. While the 3D engine is nice, we hope that they are able to somehow take more advantage of it in the future, as we’re not sure it adds much to the gameplay at this time. The game, however, is well put together and for only $1.99 may be hard to pass up for tower defense fans. The feature I think that’s most compelling is the fact that TowerMadness is an open-map design akin to Fieldrunners which requires you to create your own path. Most competing games offer a fixed-path map structure which some players may not find as enjoyable.