Ian Bogost, developer and video game theory blogger, brought an iPhone port of his retro-inspired Guru Meditation [link] to the App Store.  In an unusual twist, it’s a port of his Atari 2600-based original title…that is also a new release.  While Guru Meditation is a relaxation / meditation game designed to offer the player an opportunity for clarity of mind, the inspiration of the title is largely to pay homage to the Amiga lore of the early 1980s. 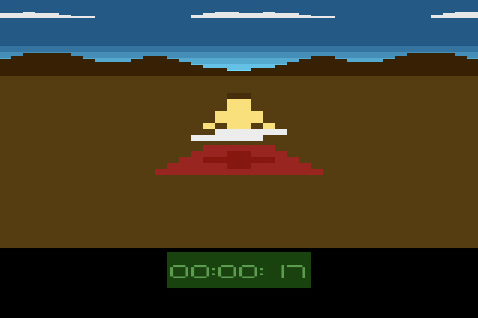 Backstory in a nutshell:  In 1982 Larry Kaplan of Activision formed a team to create the ultimate video game machine.  His choice for chief engineer was Jay Miner, creator of the (then) highly advanced custom graphics chipset used in the Atari 8-bit line of computers.  Due to the videogame crash of 1983, the strategy shifted and the (then) enormously powerful Amiga custom hardware was adapted for release as a computer, the Amiga 1000.  A decade ahead of its time, the amazing Amiga knew no peer as far as its price / performance ratio. 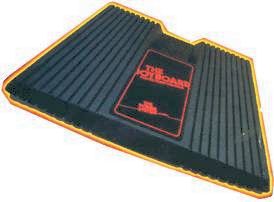 During development of the system, Amiga released several joystick products for the Atari 2600 line to fund the project and get the Amiga name out there.  One of these was the Joyboard, a device the player would stand on to control games by shifting body weight.  Think Wii Balance Board — 25 years earlier.  The Amiga programmers developed an internal game called Zen Meditation that challenged the player to sit perfectly still upon the Joyboard.  If the player moved, a “Guru Meditation error" would occurr.  Inspired by this game, the Amiga team labelled the Amiga computer’s equivalent of the Blue Screen of Death “Guru Meditation."

Read Ars Technica’s excellent “A History of the Amiga" series or, better yet, Brian Bagnall’s superb book On The Edge: The Spectacular Rise and Fall of Commodore, for the full story of this notable landmark in computing history.

To put the game in the hands of a somewhat wider audience, Bogost has also released an iPhone version — a faithful port of his 2600 game.

The iPhone offers a unique opportunity for a true relaxation game, since it makes such constant demands on our attention—telephone, email, text messages, Twitter, etc. Guru Meditation for iPhone literally makes it impossible to pursue other activities while playing. As such, it offers a convenient secondary commentary on the often overwhelming values of “connection" that today’s portable communication devices embrace. 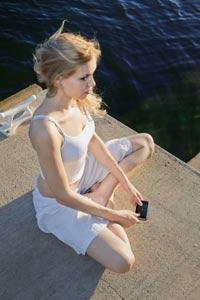 The game starts with a tap to the bouncing iPhone icon at the title screen.  The user must hold the iPhone or iPod touch as still as possible, parallel to the floor, while the orientation screen appears, ensuring that there is a minimal noise level in the room (for iPhone users, where the mic is enabled).  Once the input requirements are met, a Yogi will appear and, if all you remain properly situated, will start to rise and float gently.  A timer will start and the challenge is to remain calm and focused.

Time passes subtly during the game. Clouds move. The time of day changes, roughly every hour, from day to dusk to night to dawn. You can select a different starting time of day by waiting to choose a starting point on the title screen.

If you move or a sound disrupts you, the yogi will fall and the game will end. Touch the screen to see your recorded time for this session, as well as your average meditation time across all sessions. You might consider setting a meditation target for yourself each day, and using the average score display as a way to track your goals.

Guru Meditation is about as simple as it gets.  Of course, anyone who owned/s an Amiga or already knew the backstory, has to grab it straight away.  But others, who don’t find the retro graphics a plus or who might not thrill at the notion of a game that demands that the player do absolutely nothing, may want to hold onto their $.99.

Those who cared to comment in our forums are intrigued by the game.  ‘Jeep was particularly fond of the title.

It’s a great piece of historical gaming trivia and I think it deserves a place on any iDevice because of that. And it promotes relaxation and meditation (and yoga) which is more than an added bonus. One of my best purchases from the appstore!