Back in the day there was an iOS game called ZiGGURAT, and it was considered one of the first “hardcore" games for the platform. Players took on the role of the last surviving member of mankind, standing in place atop a titular ziggurat and fending off endless waves of one-eyed aliens by shooting exploding, bouncing balls at the ascending hordes.

ZiGGURAT was a simple game with basic graphics and unusual controls that, despite having an ending, was pretty much an “endless" shooter. Towaga: Among Shadows (), by contrast, has completely different controls, a gorgeous art style, a much-more straightforward weapon, and a story campaign with interesting characters and clear goals getting accomplished.

Yet, it’s easy to see how Towaga owes some of its appeal to the ground broken by ZiGGURAT’s gameplay — in no small part because you often find yourself standing atop a ziggurat fighting off waves of incoming enemies. Some of these enemies have two eyes, though, so there’s a clear difference. 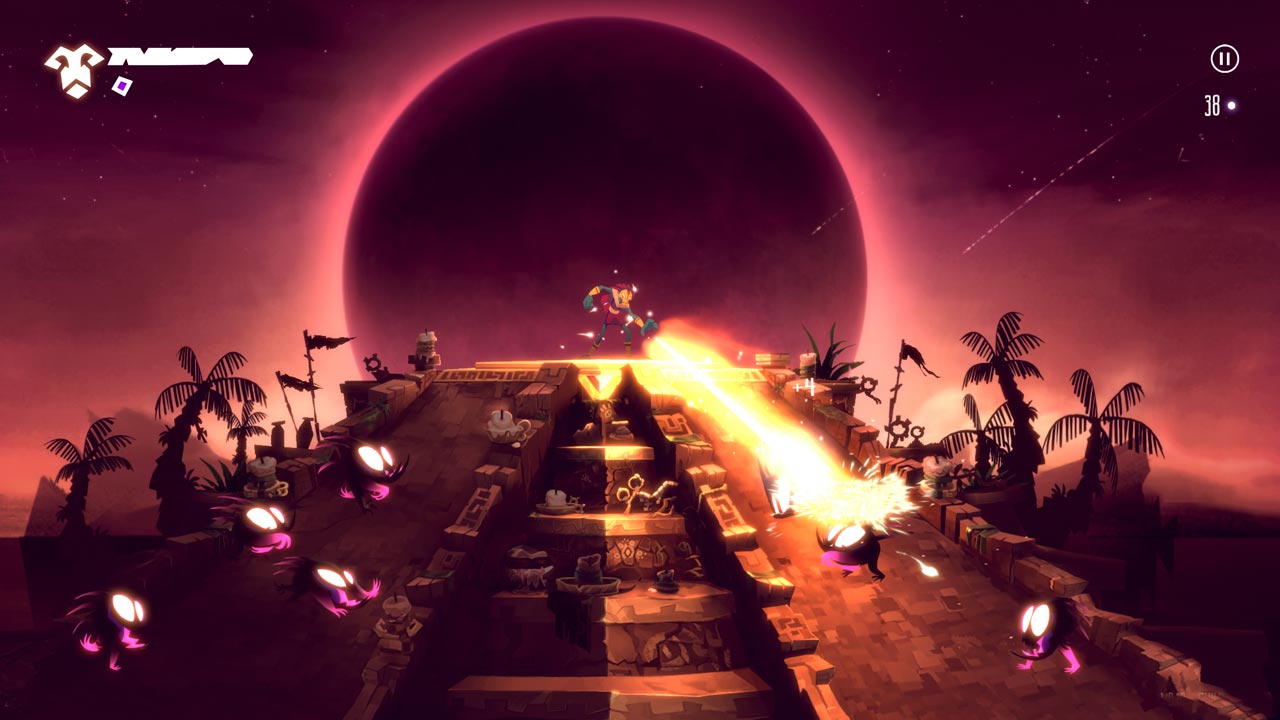 Players take the role of Chimù, a light-wielder whose village was destroyed by an evil creature named Mental. It’s his task to exorcise dark spirits, restore sacred shrines, and destroy the foul being that rendered his world to ash.

He does this by shooting light beams from his hands. It’s more effective than it sounds.

For a game that mostly consists of standing in place waving around some kind of mystical flashlight, developer Sunnyside Games have shown a lot of ingenuity in how to force players to adopt new strategies. While the game starts out with creatures that just blindly charge Chimù and are easily dispatched with a quick beam to the face, it soon changes things up.

Before long, players have to split their focus between enemies that teleport, enemies that explode, enemies that fire orbs and enemies that will make their allies more powerful if they stick around for too long. The boss battles show an even greater amount of creativity, constantly shifting the playing field in a way that keeps players on their toes.

Dealing with the varied threats requires players to quickly identify which types of enemies are attacking, a feat that’s unfortunately harder than it needs to be. Each creature has a distinct silhouette, but they’re all the same color, so when they attack en masse (as they often do) they all kind congeal into a blob of blackberry jelly with a strange aversion to bright lights.

Thankfully, there are spells that help with crowd control when things get out of hand. They all help turn the tide of battle in your favor, though some are more useful than others. I found myself exclusively using an enemy-slowing ice beam that covered a good quarter of the screen up until I unlocked the vampiric bullet spell that heals Chimù as it hurts the enemies.

Players can also level up their abilities, though there’s very little there besides standard stat increases. This comes along with two endless modes that players can grind to increase the amount of “shards" they have, which are used to purchase the upgrades. The upgrades do help make the game easier, without letting the player get so overpowered that the game can be beaten without any effort. It would have been nice if there were more depth to the system, however. 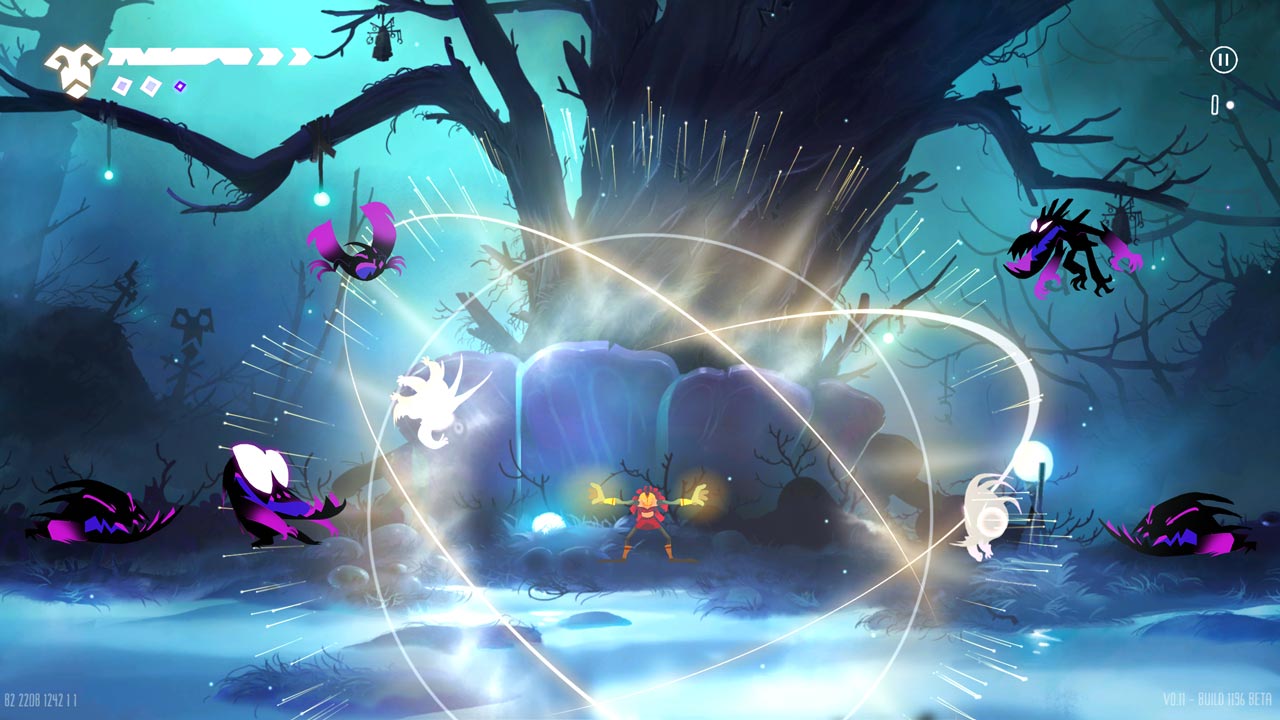 Aside from the problem with the enemy colors, the graphics and animations absolutely shine. They successfully inject character into Chimù, his allies, and his enemies as the quest to defeat Mental progresses throughout the story. The locations that Chimù fights in are gorgeous and varied, adding a sense of weight to the action and making them feel distinct despite the fact that from a practical standpoint, there are only three different types of levels that players fight in: A flat plane, the top of a pyramidal ziggurat, and up in the sky.

All of this combines with some fantastic sound design that works together to draw players into the action.

The game follows a story that reveals itself with vague suggestions and subtle implications, both in the dialogue of the characters, animations of Chimù’s memories, and journal entries that describe what led up to the catastrophic world that players are fighting through.

It is styled in a way that gives players a sense that the story won’t end when the game reaches its apparent climax. And they’re right — a revelation that could be considered a spoiler, but when the game nears its apparent end and players realize that they’ve barely touched the unlockable content in their codex, it’s one that most people will figure out on their own before the reveal.

There’s certainly things that Towaga could do better, with its samey environments, token upgrade system, and uneven powers. But the problems never feel like much more than nitpicks, and don’t distract from what is ultimately a great exploration in how to take simple mechanics and weave them into a game that feels like a blockbuster experience.

NOTE: Towaga: Among Shadows is available on mobile exclusively as part of Apple Arcade, a premium gaming subscription service from Apple. Without being a subscriber to Apple Arcade you cannot download and play this game. Apple Arcade is $4.99 per month and does come with a free one month trial, you can learn more about it on Apple’s official website or by visiting our dedicated Apple Arcade forum.