The folks at GameClub have already nailed down two of Rocketcat’s three hook-swinging mobile games, with Hook Champ being their debut title back in March and its sequel Super Quickhook arriving in early May. Now the trifecta is complete as Testflight invites for the third game Hook Worlds have gone out to GameClub Early Access members today. I’ll assume you’re familiar with Hook Champ and Super QuickHook, Rocketcat’s previous hooking games that featured pre-designed levels and a story-driven single player campaign, and Super QuickHook featured an endless mode called Avalanche Mode where you’re trying to outrun an avalanche that’s constantly on your tail, and that was the basis of inspiration for Hook Worlds. 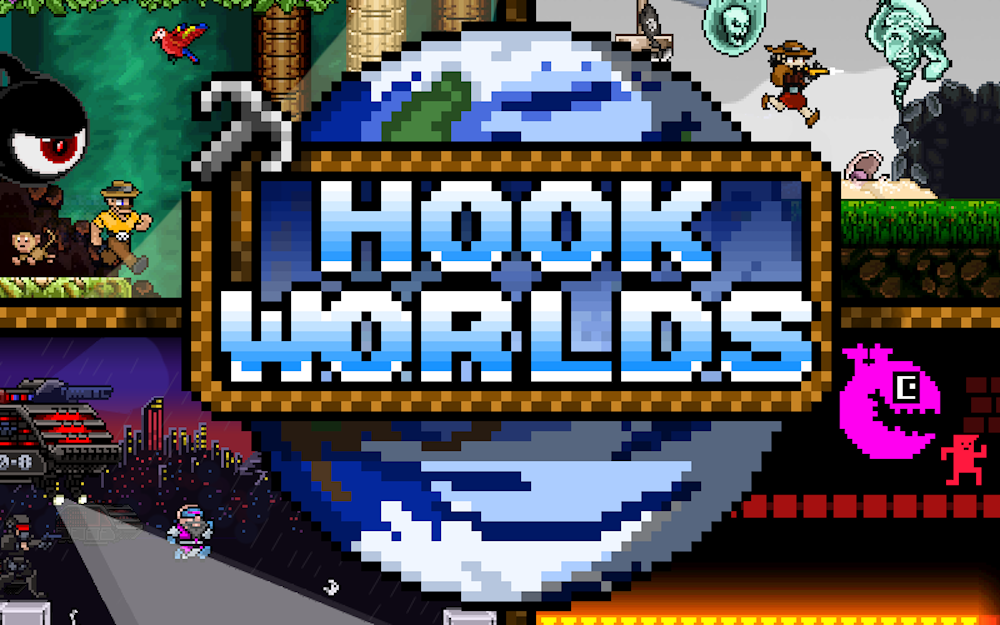 The game is actually broken up into four worlds. World 1 is called Curse of the Watcher and features Gramps and his recharging Rocket Boots trying to outrun an evil guardian spirit, and it plays pretty simiarly to Hook Champ. World 2 is called Bounty Gunner and features Zelle from Super QuickHook with a revolver that she can use to blast evil pirate spirits into the AFTER-afterlife. World 3 is called Cybergnome 202X and has you playing as Gnomey who has the ability to switch gravity at will. This is perhaps the most unique of all the worlds as trying to hook and swing while running on the ceiling is something you really have to wrap your brain around. And finally, World 4 is called Hook Champ 1000 and is more or less a de-make of the original Hook Champ with Commodore 64-inspired visuals. This is actually my favorite world as it’s just a very minimalist, pure take on Rocketcat’s hook swinging mechanic.

Probably the biggest change in Hook Worlds from the previous games is that your characters now auto-run to the right. This simplifies things greatly in terms of controls, with just two inputs now: Left side of the screen to trigger your special ability, right side to hook. It also gives the game a really nice rhythm. I reviewed Hook Worlds way back in December of 2010 and loved it a ton, if you want to read one man’s nearly decade old thoughts about this game. Also of note is that originally Hook Worlds launched as a 99¢ game with those who bought it during its first weekend getting the fourth world Hook Champ 1000 as a bonus. That level was eventually added to the game for everyone, but boy do I miss the days of fun early buyer incentives and the like.

Of course the GameClub version of Hook Worlds is totally free on Testflight and includes all four worlds right out of the gate, so be sure to sign up for GameClub Early Access on their website and join up with their Discord where they post all sorts of exclusive stuff and take this latest release, the fantastic Hook Worlds, for a swing yourself.