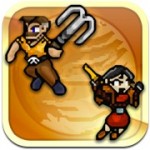 Last week we brought you new video and information on Rocketcat‘s newest iOS game Hook Worlds [99¢]. The aim of Hook Worlds was to be more accessible to people who felt put off by the somewhat hardcore nature of their previous offerings Hook Champ [$2.99/Lite] and Super QuickHook [$2.99]. Hook Worlds is a collection of 3 (or 4, depending on when you’re reading this) endless running-style games, but featuring the grappling hook mechanic that is a Rocketcat trademark. Hook Worlds definitely succeeds at being more accessible, and although it lacks the structured level progression of their previous games it does not lack in gameplay or fun.

Each game included in Hook Worlds is its own complete experience built off of the same general idea of hooking as far as possible in a randomly generated level. The hardest adjustment to make playing Hook Worlds compared to the previous hooking games is getting used to your character automatically running to the right. This simplifies the controls down to just two moves though, an action button on the right and launching your grappling hook by touching anywhere else on the screen. This scheme works really well, and lets you focus squarely on the action happening in the level instead of worrying about the controls. 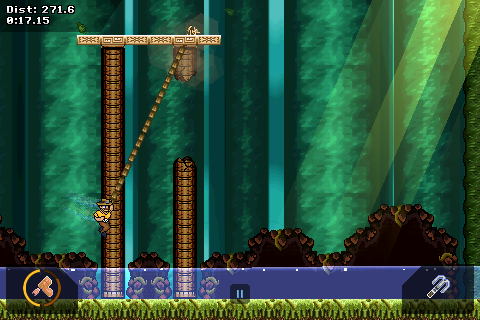 Hook Worlds initially comes with 3 different game worlds to play, but if you buy the game before this coming weekend is over then you’ll get access to a fourth world and a couple of exclusive items that are part of an early buyer program. If you miss out on this, the fourth world will become a permanent addition to the game with the first update about a month from now. Each world feels like its own complete experience, and comes with local and online leaderboards for comparing high scores. Sadly there is only OpenFeint integrated at the moment, but Game Center is a possibility for a future update. The shop system from the previous games has been streamlined in Hook Worlds, and unlocking new items is now based only on earning medals or hitting total point requirements in each of the different worlds. 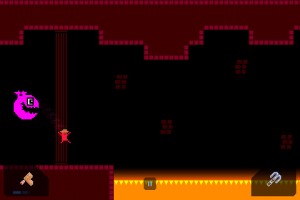 World 1 in Hook Worlds features the character Gramps as he tries to escape an evil spirit that is frantically chasing him down after finding out his sacred idol has been stolen. Gramps’ special move is a recharging rocket boost that will launch him into the air and propel him forward. World 2 stars Zelle from Hook Champ, and features ghost enemies and the ability to shoot them with a revolver. The point of this world is to collect as many coins as possible before dying. Zelle has a 3 heart life bar that depletes by hitting enemies or hazards in the environment, and when it’s empty it’s game over. These first two worlds are a lot of fun, and combine elements from the previous games, but world 3 is where things get really unique.

In World 3 you play as Gnomey from Super QuickHook, only in the distant future where it’s illegal to be a Gnome. Here you are trying to escape the Gnome Police who are constantly on your tail, and Gnomey’s special move is the ability to flip gravity. The gravity flipping adds a whole new dimension to the hooking gameplay formula as you’ll need to hook while upside down at times, something that resembles pole vaulting. It’s hard to wrap your head around this at first, but once it clicks, world 3 offers some of the most exciting and intense gameplay in the entire game. My favorite world though, if I had to pick one, is world 4 which is a Commodore 64-esque retro take on Hook Champ. Gameplay here is similar to world 1 in that there’s a chaser after you and you have recharging rocket boots, although movement is much faster. I don’t know if it’s the overly simplistic graphics or the pureness of the hooking gameplay, but I can’t ever seem to get enough of world 4.

That is the great thing about Hook Worlds though, there’s basically 4 complete games in one. It’s a breeze to hop in and out of each as you see fit, and I love just bouncing back and forth through all of them. I do miss the progression of working through set levels like the previous hooking games, but I understand that isn’t what Hook Worlds set out to do. What it did try to do is create a more approachable hooking game with near endless replay value, and at this Hook Worlds succeeds beautifully. It’s my new favorite Rocketcat game, which is saying a lot considering how much I love the previous two, and our forum members are loving the game as well. If you ever felt intimidated by Rocketcat’s previous hooking games, or you’re already an established hooker looking for a new fix, then you’ll want to give Hook Worlds a shot.