In the decade I’ve been covering iOS games, we’ve had some weird sources for stories, but this one might take the cake: One of my favorite Instagram accounts is f*ckadvertisements, which is just another one of those weird photos and oddball meme accounts but whoever runs it shares a very similar sense of humor with me. Over the weekend they posted a screenshot of the warehouse level of Tony Hawk Pro Skater, which is an image I can’t look even look at without hearing Goldfinger’s Superman. I jumped into the comments seeing what sort of nostalgia people were sharing, and found … Tony Hawk himself chatting with everyone, even mentioning that there’s a new Tony Hawk mobile game coming “soon-ish." 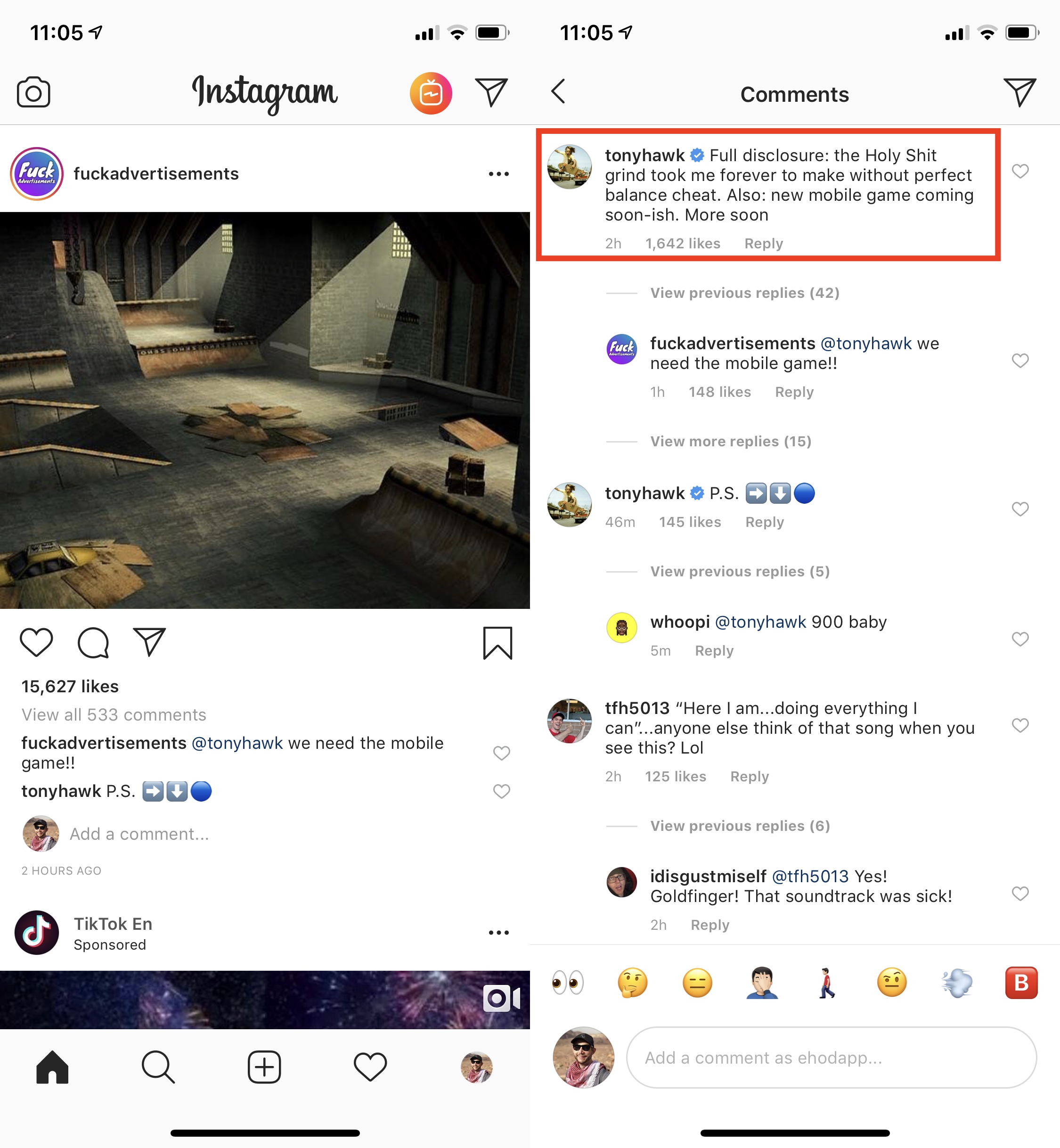 Tony Hawk games and the App Store have had … one heck of a history- Particularly when it comes to Tony going rogue and just announcing them. Ages ago, a video surfaced (which has since been removed) showing Tony Hawk Pro Skater 2 being played on an iPhone 3G. Not long after we tracked down the author of the video who basically created a port of THPS2 as a tech demo to show what was capable on the iPhone. (This was still during the early days when 3D games were fairly rare, much less full-blown 3D ports like this.) We figured that was the end of it, then Tony Hawk announced it was coming, randomly, on Twitter.

When it was finally released, we loved Tony Hawk Pro Skater 2 for the iPhone. The game controlled about as well as you would expect, but, once you got over that it was a ton of fun. (We even talked to Tony Hawk about all this at GDC.) THPS2 ran its course on the App Store, and was removed, but Tony was still interested in releasing more mobile games.

This eventually led to us doing a hands-on preview of the game he was working on back in 2014, called Tony Hawk’s Shred Session. The best way to describe the game was a really, really good mashup of a skateboarding game plus an endless runner. You can see Tony Hawk himself playing it in the video above. Shred Session would eventually be “postponed indefinitely", but there was supposed to be a new Tony Hawk game released in 2015… Which never actually came.

We’ve reached out to all of our contacts that might be able to get us more details on the game, and expect to hear back at some point today. In the meantime, it seems safe to begin speculating what kind of game Tony Hawk could be working on. Personally, I’d be 110% satisfied if they just went back to release Shred Session. It was a great game, but, if nothing else, it’s nice knowing something is in the works.