If you’re at all familiar with the work of Colin Lane, then you probably expect Golfing Around (Free) to be a jolly old jape. A game that has its tongue firmly placed in its cheek with a zany approach to everything it does. But with Golfing Around things are a little different this time. The game still has the charm of other games created by the same developer, but its altogether more serious tone is one that is hard to miss. Golfing around is a golf simulator, at least to the point a 2D top-down golfing game can be, and it’s an absolute blast.

Top-down golfing is nothing new as far as the App Store goes. There have been many, many games that came before Golfing Around but few have been able to offer the same level of charm while managing to remind me of the games I used to play back when I was a kid. I’m thinking of the original PGA Tour games on the Sega Genesis (Or Mega Drive to those of us across the pond) where golf games were simulations, but also had a decidedly simple feel to them. You point the ball in the direction you want it to go, allow for wind direction and severity, and away you go. 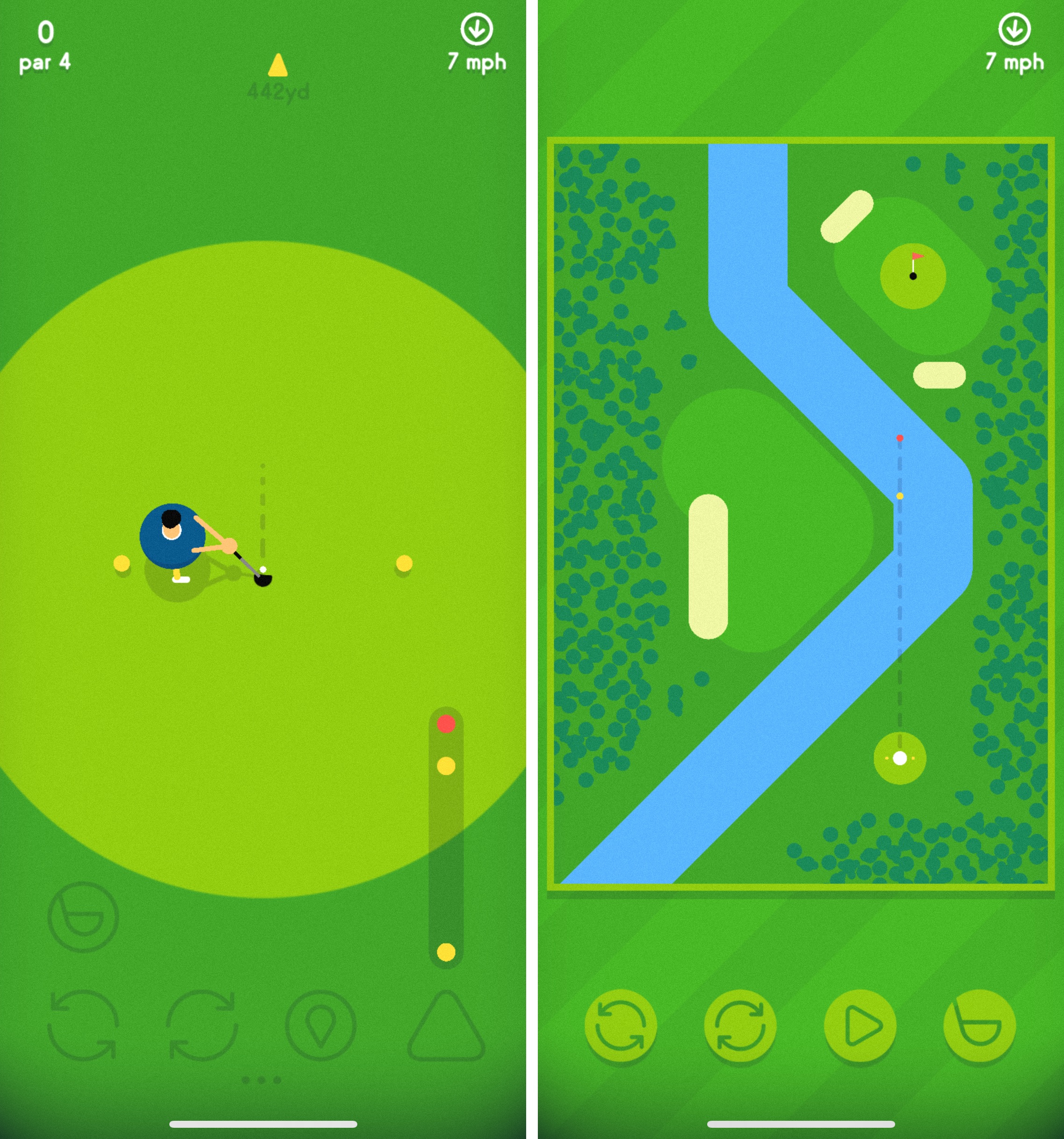 That’s the beautiful simplicity that has me hooked on Golfing Around, but there is also a facet of the game that makes it much more complicated than it first appears. Yes, you tap and hold on a power meter in order to tell your little golfer how hard to whack the ball, but there are considerations to be made beyond that deceptively simple mechanic. Holding the button too long will cause your player to slice the ball, causing it to spin off either left or right. Selecting the wrong club will have you either massively overshooting your target or dropping into that pond just before the green. There’s more to Golfing Around than initially meets the eye, but it all adds to the enjoyment rather than detracts from it.

As I mentioned earlier, the main view you will take when playing is a top-down affair with your character in view, fairly closely zoomed. However, tapping a button will see the camera zoom out, giving you a bird’s-eye view of the terrain you need to navigate in order to reach your ultimate goal, the hole. This allows for more careful planning of your shots and with the club selection becoming so important as holes become more difficult, it also allows you to pick the right one for the shot at hand, too.

Thankfully, all of the internal debating you will do while choosing the right shot won’t get too uncomfortable thanks to the decision to make Golfing Around a portrait game. Because of this, one-handed use is perfectly possible and honestly, encouraged. Being able to pick the game up and thumb your way through a hole or two while waiting for your sandwich, or an Uber, or anything else for that matter, is a joy. I love one-handed games for this very reason, and it suits the way this game plays to a tee if you’ll forgive me the golfing pun!

When it comes to longevity, the fun you can have with Golfing Around is ultimately endless. THere are three courses each with nine holes, but when you’ve perfected those you can move on to user-created courses. Or if you’re so inclined, you can create your own, too. This alone can extend the game’s lifespan immeasurably, and considering the game won’t cost you a penny (assuming you can live with the ads) then there are few better value for money propositions around right now. If you do decide that the ads are not for you then a very reasonable $2.99 will see them bid you adieu, allowing for intrusion-free gaming.

By now it’s probably abundantly clear that I’m a fan of Golfing Around. There is something about being able to play a golf game that takes itself seriously, but not too seriously on an iPhone, one-handed, any time I want that I think makes this a great addition to any gaming arsenal. And when you’ve done that, maybe check out some of Colin Lane’s other work? There’s plenty to choose from.