Blending the hero shooter elements of Overwatch with the core gameplay loop of tower offense Clash Royale (Free), Oh BiBi’s FRAG Pro Shooter lays the foundation for a 1v1 competitive shooter/MOBA hybrid — but does it show signs of succeeding?

The objective of FRAG is to move through a two lane battlefield and eliminate your opponent’s base. Damaging a base removes tickets (which is adjusted to a higher number per account level). If the opposition is left with no remaining tickets, victory is yours. Each kill in the field also contributes to the loss of tickets — and in many circumstances, you’ll find victories dependent on the loss of two enemy bases alongside player kills. It’s also important to note that you will always know which hero your opponent is controlling by their screen name highlighted above the champion.

As the match begins, you are randomly spawned as one of five champions you select for your team. Four points of interest are highlighted: two within your base (defense) and two within the enemies base (offense). Once a mid-field base is destroyed, the shields on the main base are removed allowing you open to progress and attack their main base.

Popular strategy consists of selecting your defense positions at the start of a match and bringing your defense champions up from spawn to position. Once the character you control gets out mid-field, then select a base to attack, similar to how you’d attempt to fake out an opponent in Clash Royale. But always remember: if you push a lane, you must also remember to defend your lane. 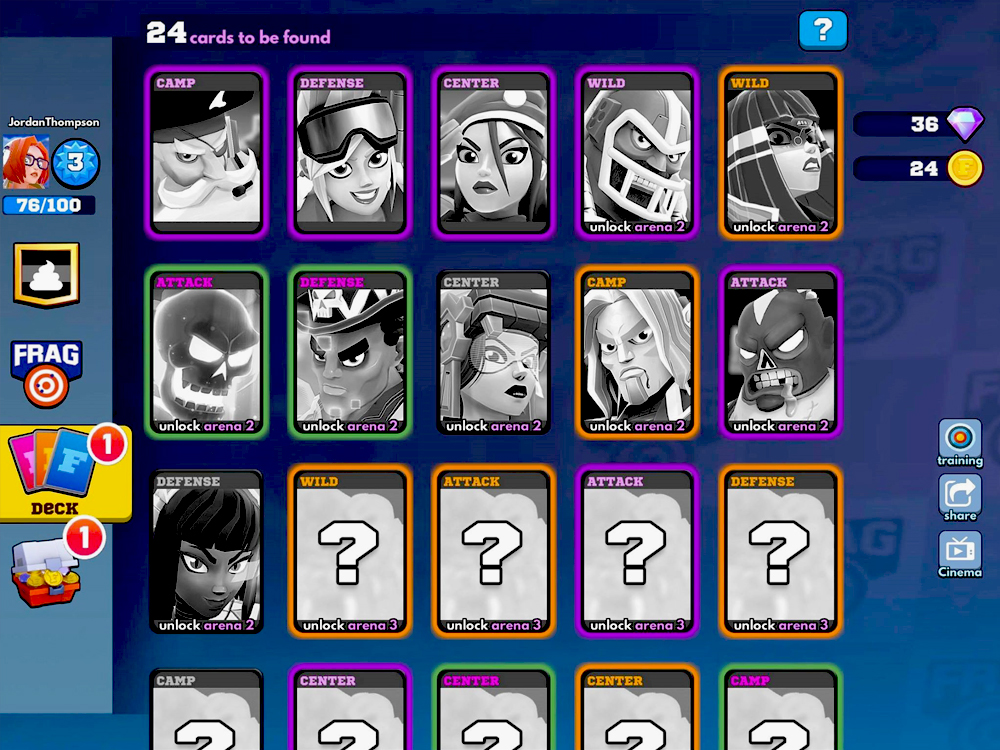 Character and account progression is almost 1:1 with Clash Royale. You’ll find yourself going through the same core-loop: open chests on various timers (3 hours, 5 hours, etc.) in which you’ll get game currency, a chance at gems (the purchasable currency), and sets of player cards.

After you obtain a hero’s initial player card, you can then set them into the game’s lineup. After each victory you receive a lootbox that is split between rarities: silver (common), orange (rare) and purple (epic). 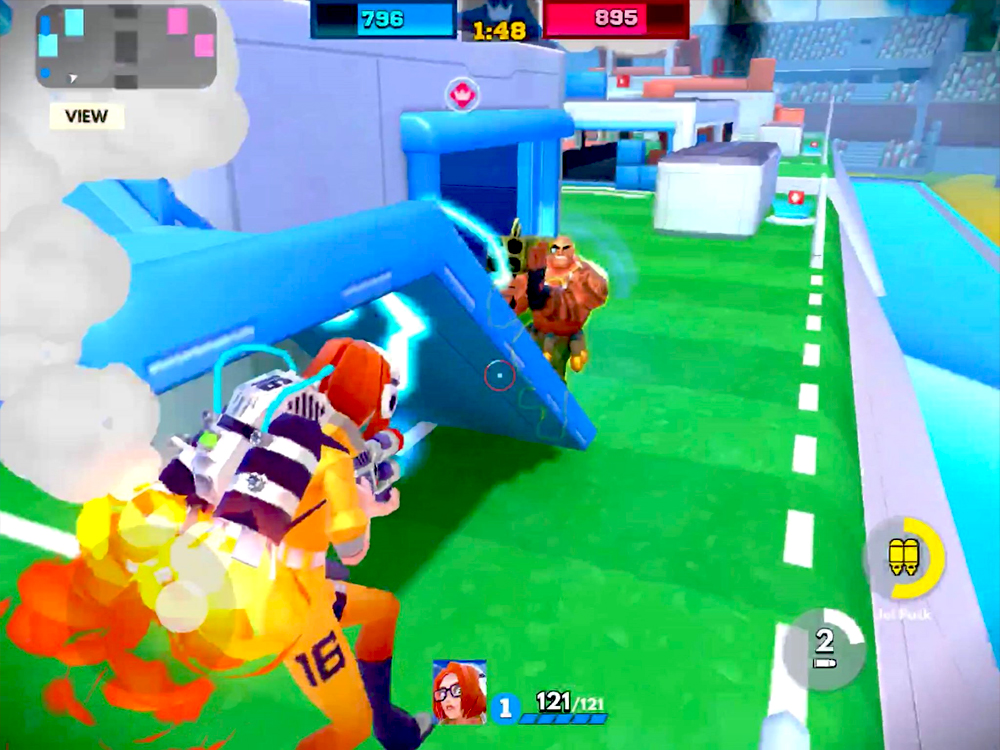 At this phase of testing there are currently 37 playable (11 common, 12 rare and 14 epic) characters with their own unique aesthetic and special power. Character skills are quite diverse with each character having its own country of origin and backstory.

An easy example to show player kit diversity is to showcase two playable champions: Jet, a character from Italy, comes from a long line of racers. Her special power is the ability to use a jet pack. Self-described FRAG fan favorite Dan hails from the United States of America. Dan uses two fast firing pistols (a la Tracer from Overwatch) with a health regen special power — no other playable character in my roster currently has a self heal. 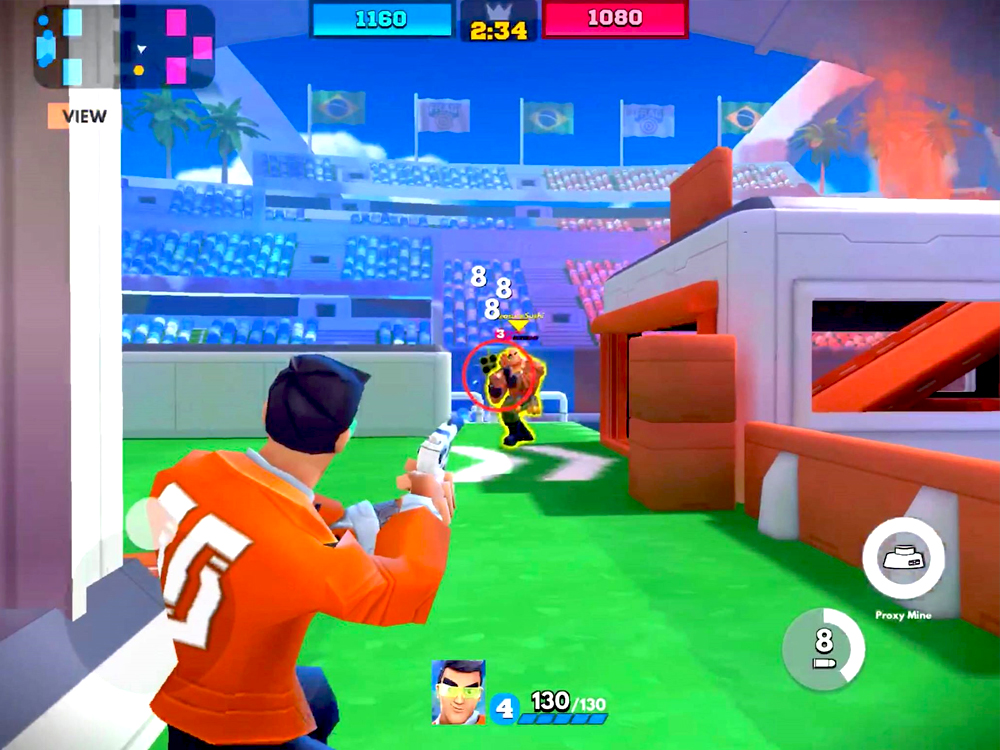 While the champions themselves feel unique in both visuals and kits, FRAG’s greatest stumble is the lack of character barks. In a post-Overwatch world, if you’re going to build something that even remotely resembles Blizzard’s hero shooter behemoth, you have to cover all the bases. Not having those one liners or even an announcer voiceover hero selection feels odd and dated, especially when so much work was put towards fully fleshing out all other parts of the selectable champions.

The current available positions of hero classes fall into five distinct categories: Attack, Center, Camp, Defense and Wild — leaving strategic team builds open and out on the table. One would initially assume you’d want to balance to a genre standard with meta team builds of two attack, one center and two defense (give or take a camp or wild in the mix) but at this early stage I’ve encountered multiple builds with limited success. It doesn’t seem like FRAG is anywhere near sustaining a baseline meta which adds to the fun — if you’re into theorizing successful builds. 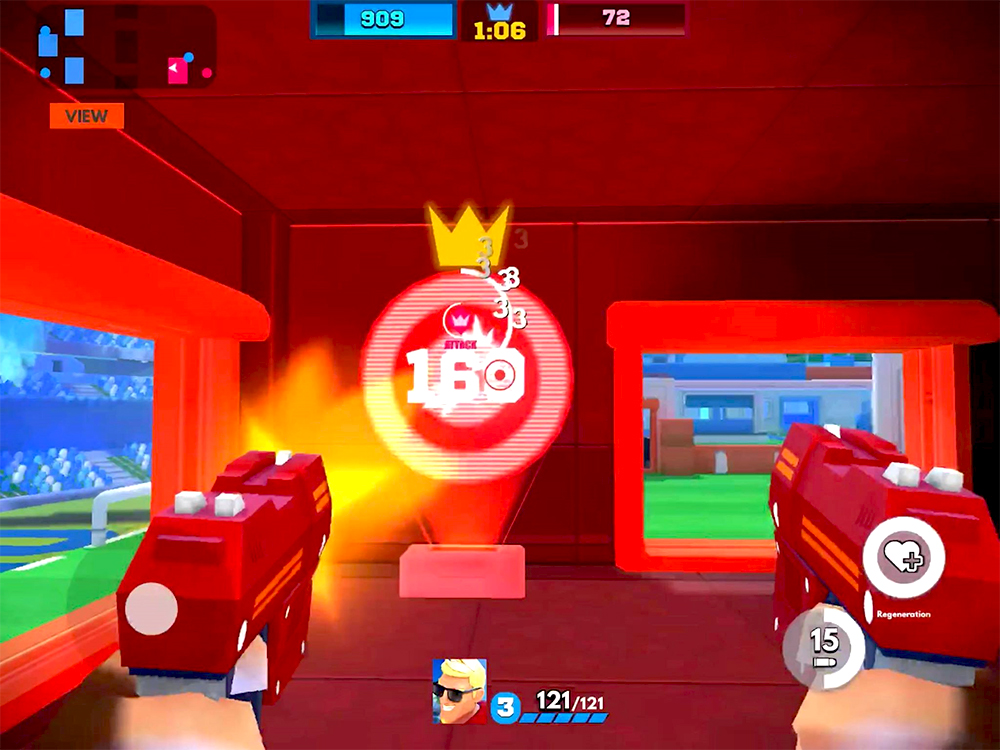 FRAG‘s shooting mechanics follow suit to similar games in the mobile FPS scene, opting to drop the fire button, meaning as long as your reticle is on the enemy and active (shown via the reticle glowing red) you will fire. Once the magazine has been emptied, you will reload. There is an active reload button, but ultimately it doesn’t feel as responsive and I leaned far more into emptying all rounds and then taking cover for the reload animation.

For some characters the auto-fire control scheme seems to compliment them and feel natural. Others lead to weapons feeling inaccurate with animations feeling loose and sloppy. I found myself building my deck around characters I feel “clicked" with the auto fire mechanic, ignoring builds that may have better stats or superior upgraded characters.

With a small population playing FRAG, matches tend to pull opponents from far away regions. Lag can sometimes be severe. Occasionally it’ll appear your AI-controlled teammate isn’t following commands, or when you pull back to view the HUD map you just can’t spawn back into the game until a champion dies and is resurrected; all major bugs couldn’t be pinpointed to latency or the game being broken itself. While these are major flaws needing to be fixed, these assumedly will be fixed in later builds.

FRAG’s biggest strength is its aesthetic: the game looks stunning. It runs at a stable framerate with (in action) all textures crisp and smooth. While arena maps are identical across settings, the base architecture of the map feels very balanced with multiple places to take cover, back door potential and the obvious choke points encouraging “team fights" to happen. 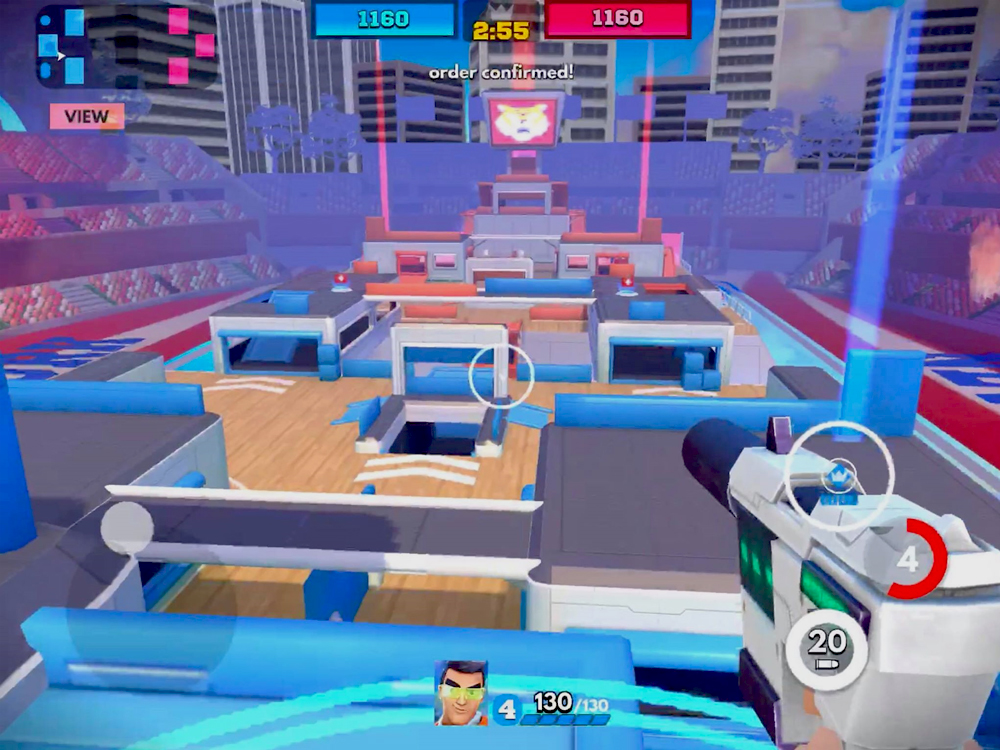 All things said, Oh BiBi’s FRAG has enormous potential. If FRAG continues to improve character specific lines, core game mechanics, and various quality of life improvements, I could see this game growing a casual and competitive scene around it. FRAG is a title that should be watched with anticipation as it continues to evolve. If you’d like to test FRAG yourself, sign up by visiting http://www.fragthegame.com and of course you can find more discussion and impressions from other early players in our forums.