Every since we first heard that a game based in the Lords of the Fallen universe would eventually hit iOS, we were curious as to how the Dark Souls-style gameplay would translate onto the mobile platform. When we finally learned that it would be, in essence, an Infinity Blade clone, we were met with even more questions. Would it offer anything to the genre? Can it successfully be a successor to the aging Infinity Blade series? Unfortunately, the answer to both those questions is a definitive ‘No.’ Lords of the Fallen ($9.99) is simply a sub-par clone in a genre that requires perfect execution to be worth playing.

Being an Infinity Blade clone, it’s really not hard to get into Lords of the Fallen. Your hero moves automatically from locations to location, encountering a variety of enemies from the LotF universe. Once battle starts, you dodge, block or parry your way to stunning your opponents. Once stunned, you can get a few good hacks in to deal damage. After they recover, you do it all again until they are defeated. Spells are available to spice up the combat, and once you defeat your foe you earn both gold and experience. Level up, and you can increase the spell levels of your collection. Earn enough gold and you can purchase a large variety of weapons and armor in a shop system that looks almost exactly like Infinity Blade. 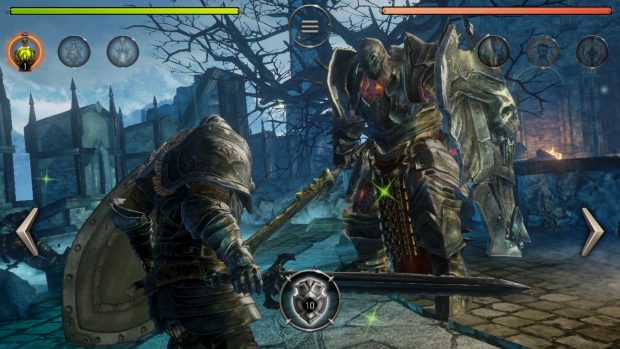 I wish I could say there was more to the combat system, but unfortunately it simply lacks any actual innovation. If anything, I’d say Lords of the Fallen is a bit of a regression compared to the finely tuned combat of Infinity Blade 3. There appears to be a bit of a delay in terms of the game recognizing your swipes, so when you try to parry odds are you’ll probably miss the window and end up taking damage. In addition, the combat just feels sluggish, which is even more surprising considering that the visuals aren’t exactly state-of-the-art to begin with. Finally, the different weapon types and heroes you can unlock just don’t offer enough in terms of variety to make you care about leveling up each.

The issues with Lords of the Fallen continue beyond the combat system. In terms of purchasing weapons and armor (which is really the only way to feel like you’ve accomplished something beyond the story), the sense of progression feels off. Weapons and armor cost way too much for a natural progressive curve, and the forge system seems like a poor substitute compared to actually finding weapons and armor. I’d go so far as to say that the game very obviously is trying to steer players towards making IAP purchases in order to fix that sense of progression, which is a ridiculous notion considering how expensive the game is to begin with. The same goes for the game’s card system, which isn’t explained very well and takes way too long to earn enough coins to actually purchase equipment that’s worth upgrading towards. 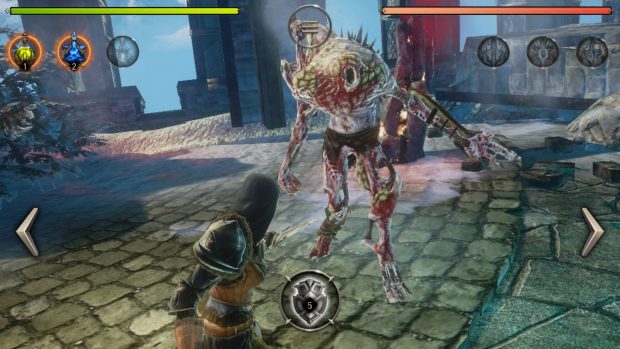 While it’s not a complaint that actually impacts gameplay, I really hate how poorly done the game’s animations are done. At the conclusion of each successful battle your hero goes into a little killing animation to make him seem more like a badass (sound familiar?). The problem is that nearly every single animation never actually has your character hitting the enemy with their happen. It’s either not aimed correctly or, even worse, it simply strikes air, making each enemy look like its simply flopping for a foul. Again, does this actually affect how you play the game? Of course not, but it’s this lack of attention to detail that permeates nearly every aspect of the game and certainly made me less than enthused to continue playing.

It’s never a good sign when you’re playing a game and wishing the entire time you were playing something else. That’s exactly how I felt when playing Lords of the Fallen. Sure, the Infinity Blade series is fairly old at this point and hasn’t exactly been kept up to date with all the new iOS versions, but it’s still playable and in my view still a better pick than this clone. Maybe if Lords would have implemented at least one big novel change well, I might be inclined to give it a honest recommendation. Unfortunately, at this point, it’s pretty hard to do that.