Rock, Paper, Scissors is probably as simple as a game can get while still having some sort of strategy to it. Indeed, its core mechanic works so well that we can see it incorporated into countless other games in the form of elemental strengths and weaknesses, weapon triangles, and so on. It’s a simple and useful means of balancing weapons, skills, and magic. You need to use what is most effective against your current enemy while ensuring that you’re well-guarded against whatever the enemy throws back at you. The strategy comes from making sure you have your bases covered, enough resources to make use of them, and figuring out how each enemy works. That’s great, but it’s also not really what Rock, Paper, Scissors is about as a game.

The core of the game itself has little to do with how many rocks or scissors you have in stock and whether you have enough to beat all the paper-turtles you’re going to run into. No, Rock, Paper, Scissors is a psychological game. It’s precisely that quality that gives it its longevity. Sure, there’s always the possibility that your opponent might attempt to throw out moves randomly, but even in such cases, a pattern would likely emerge after some time. Three choices in the tool-kit. One wins, one loses, one draws. What do you think your opponent will use? What do you think your opponent thinks you will use? A simple game, a child’s game, but a distinctly human game.

That’s the main reason why RPS Saga ($0.99) doesn’t really work all that well. There’s some nice pixel-art in here, the music is catchy enough, and you certainly get a fair bit of content for a buck. But while it bolts on a few systems from the overall RPG genre, what the game really comes down to is a bunch of games of Rock, Paper, Scissors against a computer opponent. In each stage, you’ll face off against a fantasy-themed character in a best-of-three battle to the death. Each round will have you face off a set number of times. Win, and you’ll deal damage to the enemy while blocking their attack. Lose, and the opposite happens. In a draw, you’ll both hit each other. The computer’s behavior is apparently random, though it will almost always choose the move that beats you if it can. So yes, it’s kind of cheating.

Even worse, you don’t always have all of the tools you need in your arsenal to come out ahead. In each combat round, you and the opponent will be dealt a hand of actions to choose from. Sometimes you’ll end up evenly balanced with the opponent. Oftentimes, however, you’ll be given a hand that guarantees you will take some damage. The only real strategy you can use with this part of the game is to try and trick the opponent into using up their useful moves first, leaving you with a clean shot. But you have to have the right hand to pull that off, and that part is entirely down to the luck of the draw. Basically, you’ll lose until the AI allows you to win or until you level up so high that you can’t fail. 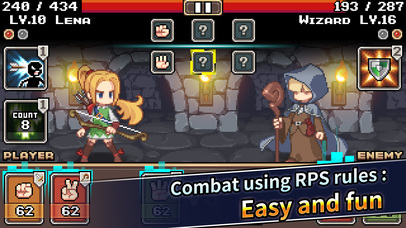 Your only wedge against that is in your special moves. Each character has a couple of moves at their disposal. They have cooldown timers attached to them, but once they’re ready to go, you can use them at your leisure to try to tilt the board in your favor. Naturally, your enemy will also have some special moves. Every character starts with a Surprise Attack skill that guarantees damage, and can learn one more skill by spending some cubes. If you don’t like the skill they have, you can re-roll it by spending more cubes. Finally, you can level up the Surprise Attack by, yes, spending some cubes. Cubes can be earned through daily quests and playing through the main game, but are primarily made available via IAP. You can also turn in cubes to get some extra money, which is useful if you don’t feel like grinding. Money is used to level up, and the higher you go, the more cash you’ll need. You’ll earn money even if you lose a match, though, so at the very least you’re always moving forward.

In addition to the story mode, the game also features an endless mode that works pretty much as you’d expect. The capricious nature of the game’s random factors can be felt most strongly here, as a good run can and will be inevitably up-ended by a few bad draws. It never feels like there’s anything you could have done differently to win, making the whole adventure something of a slot machine. That’s not inherently a bad thing, but this game presents a fairly straight take on Rock, Paper, Scissors, a game whose depth is entirely tied into the fact that it is played against a human. It’s just not an interesting enough game under the conditions found in RPS Saga. 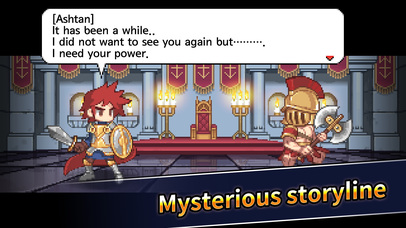 There are some things worthy of praise in RPS Saga. The visuals are nice, there are lots of characters to choose from, and the interface is easy enough to catch on to. You get a good bunch of stages, and the endless mode is there to keep you going even after you’ve finished them. If you don’t mind the weak mechanics, all of that might make you feel like you got a decent value out of the game. There’s just not enough here to compensate for the strategic loss of a human opponent. Ultimately, the game ends up proving more than anything else that some games are better left on the playground.