Welcome everyone to another Touchstone issue, our weekly column about all things Hearthstone (Free). This has been an eventful week but with only two topics dominating the conversation; the continuous stream of Gagdetzan reveals and the first Heroic Tavern Brawl. Since everyone has been talking about these two topics, there aren’t that many news stories to talk about that don’t simply repeat the same information. However, there are some fun and informative videos as the pros continue to talk about the new expansion and all the revealed cards. Not too long to go now before we see a (hopefully) new meta. The signs are positive, but we haven’t yet seen all the cards. Fingers crossed that deckbuilding will be fun again.

Heroic Brawl Finally Made Its Debut

After waiting a few weeks for it, we finally got to see Heroic Brawl in action this week. Instead of the usual fun brawl, we got the high-stakes Heroic Tavern Brawl that gave the game a very competitive feel for at least a few days. As we wrote in our story, the Heroic Brawl cost 1000 gold or $9.99 to enter and came with a warning that the mode was for strong players with good collections. As Blizzard had already told us, the mode was all about trying to get to 12 wins before losing three times. The rewards are fantastic if you do over 8 wins but pretty mediocre below that. However, nothing can make up for the tension created by knowing your next move might be the deciding one.

Even though Blizzard has already announced the expansion, it gave us another Gadgetzan Gazette teaser this week. As we wrote about in our story, the articles looked like they are teasing a Talan’s Bar-themed Tavern Brawl, but I of course might be wrong. The Gazette is an entertaining read (even with the tiny font), and I wonder if any part of it was hinting at features or cards we don’t already know about. 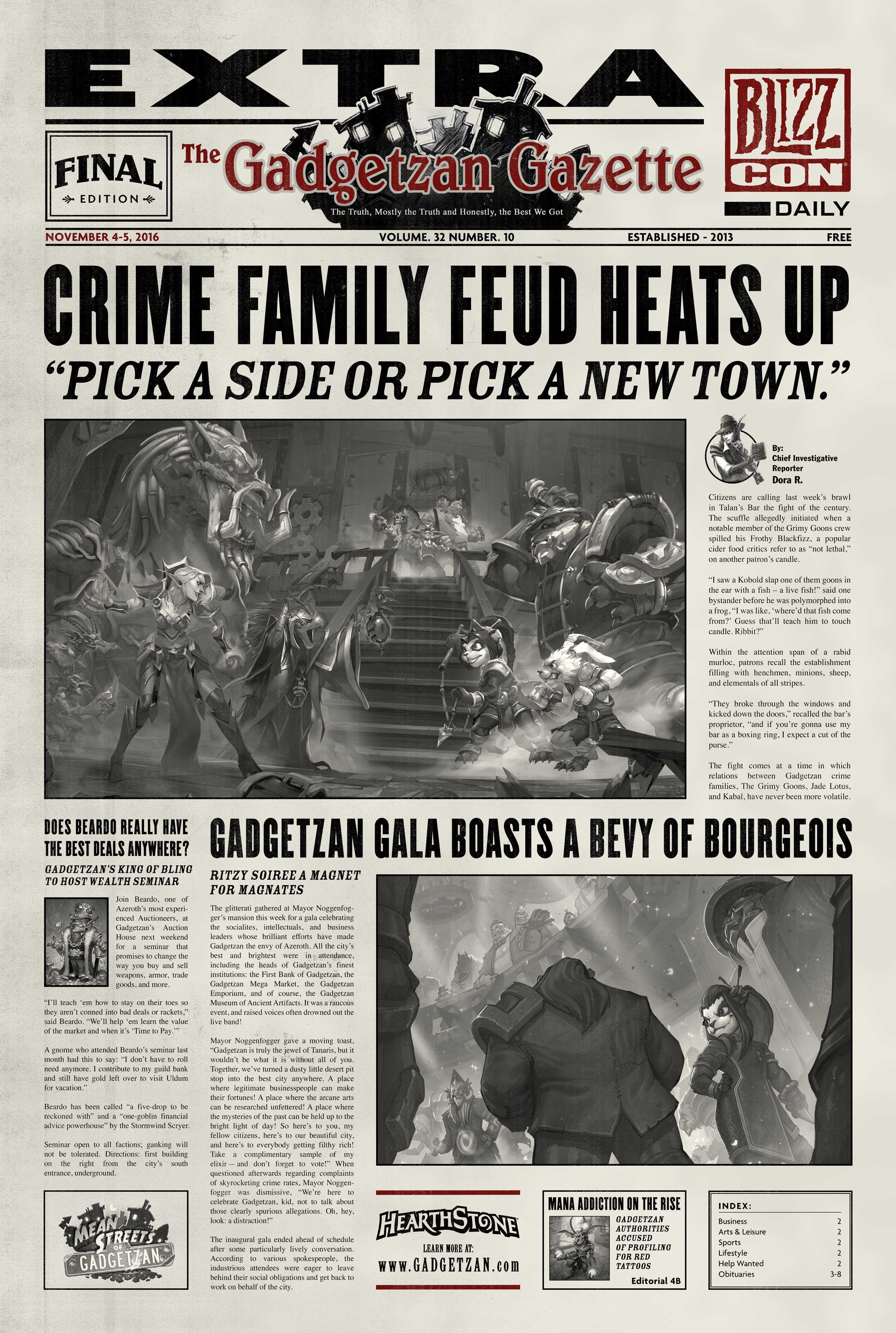 Heroic Tavern Brawl Is as Expected the Gold Vacuum

According to this article, the new Heroic Tavern Brawl is indeed the gold sink people expected it to be. The writer says that most players should keep away from it because you need great results to get your gold’s worth. With his 7-3 run (which is pretty good considering how tough the mode is), he made only 85 gold and 270 dust over what he would have made if he had simply bought 10 packs. And the fact that the packs are from the Old Gods set doesn’t make them that interesting. Of course that doesn’t take under consideration the fun of playing those high-stakes games. 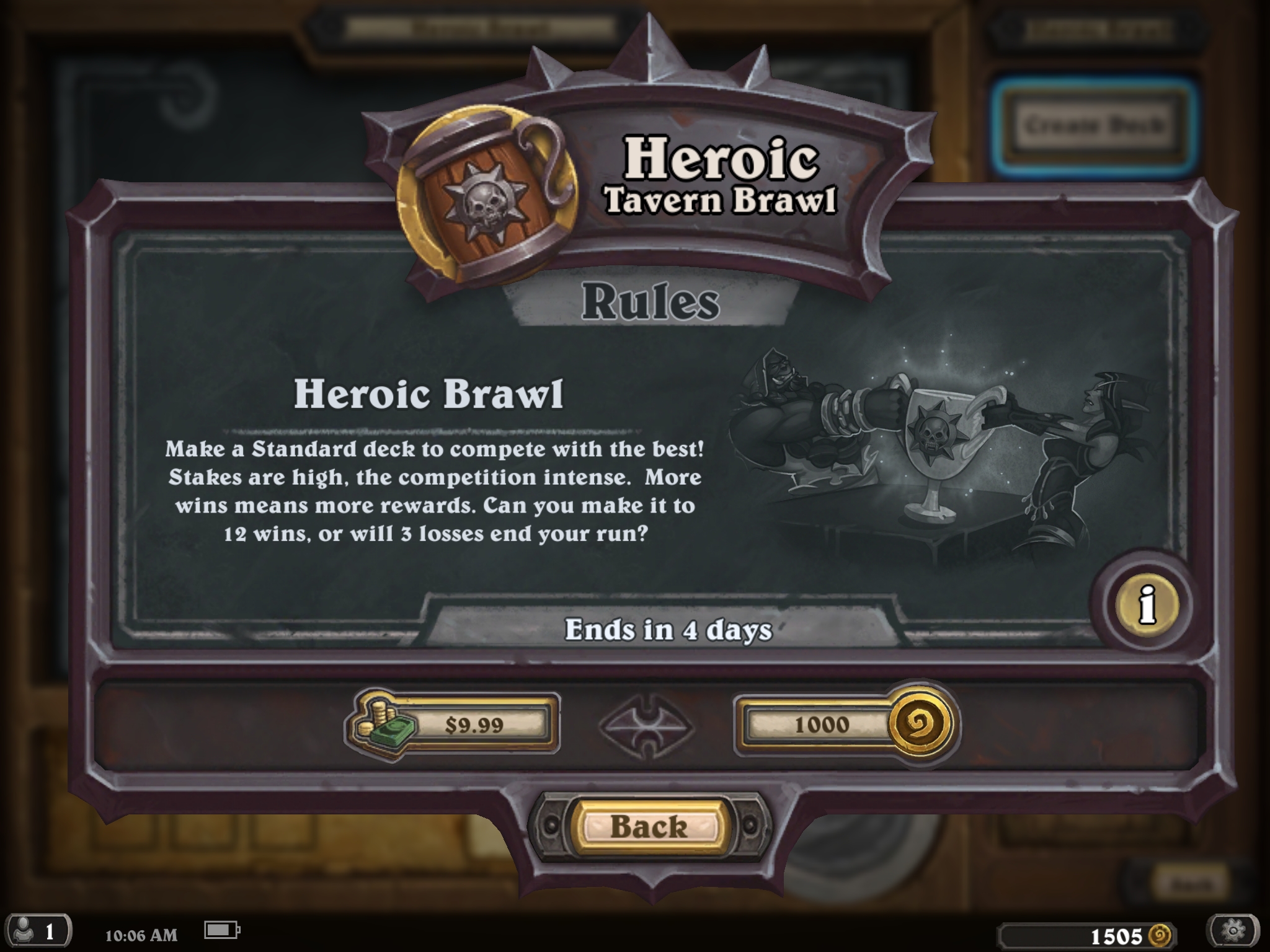 For the writer, this mode is framed as a high risk, high reward mode, but it’s actually more like a casino in the sense that the house wins the vast majority of the time. He doesn’t think that that’s a bad thing, he just wants players to know what they are getting into when they go for this Brawl. He ends the story by talking about how intense the Brawl is and how great it is for streaming.

When the Heroic Tavern Brawl was originally announced, Blizzard said it was going to only allow players to enter five times. Once the Brawl hit, though, pros were asking Blizzard to raise the limit because they were having loads of fun, and Blizzard obliged. The limit now is 100 times per player. As this story points out, a look over at Twitch stats shows why Blizzard didn’t think twice about raising the limit; the Brawl made Hearthstone the most popular game on Twitch with over 150,000 concurrent viewers. It looks like Blizzard was right about streamers and viewers loving this new Brawl, at least the first time around.

Every Gadgetzan Card Revealed so Far

If you haven’t been keeping up with the new expansion reveals, this website has put them all together for you in one convenient spot. Keep in mind, though, that we haven’t seen any Shaman cards yet, so you won’t find those here. Maybe Blizzard decided that Shaman is powerful enough as is so the class needs no new cards.

Priest Get an Amazing Legendary

The Priest class has a habit of ending up with pretty bad Legendaries every time, but Gadgetzan might change that according to this story. The new Legendary, Raza the Chained, is a 5-mana 5/5 with a Battlecry “if you have no duplicates in your deck, your Hero Power costs zero." The writer sees all kinds of possibilities with this new Legendary. In addition to having good stats, this card can work with cards like Justicar Trueheart for crazy healing, Shadowform for damage, and much more. Are you excited about this Legendary?

If you want to hear an extensive podcast about the Grimy Goons cards revealed so far, check out the Angry Chicken video podcast below. There are some good points about the upcoming cards, and the chat is entertaining as always.

Is the Counterfeit Coin Underrated?

If you haven’t been keeping an eye on the reveals, Blizzard has shown us a new Rogue card called the Counterfeit Coin. Most players haven’t shown too much interest in this card, but as you’ll see in the video below, FalconePunch55 thinks it might be an interesting addition to the Miracle Rogue. He thinks you can get some crazy early combos with this card, but we’ll see. What do you think? Is it a good card or are the pros right to pretty much ignore it?

Thijs is one of the best players in the game and was the chosen HCT champion for many, but his run ended in the group stages. In this interview, he talks about how disappointed he was with not making it through, and how streaming more this year has affected his tournament participation. He also talks about how he sees the game now, especially about current spells, and how the word Curvestone is appropriate because you don’t have the types of decisions you used to have with older decks. A very interesting interview with one of the best in the game, so check it out here.

The Hogs and the Kabal

The Future of Priest