While we’ve already posted this trick for using the Ingress (Free) map to find Pokestops in Pokemon Go (Free), there’s a considerable amount of friction in downloading and installing Ingress, signing up for the game, and using the surprisingly clunky browser map. Well, Yelp (Free) has come to the rescue, adding a new filtering option for searches, “Pokestop Nearby." Business owners (and/or Yelpers) will need to go in and flag bars, restaurants, and other locations as having a Pokestop nearby, but even looking around where I live there’s already more than a few places tagged as having a Pokestop nearby. 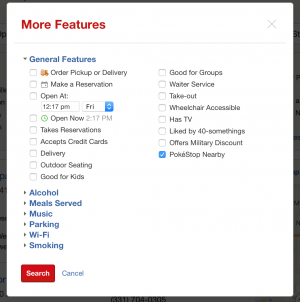 This new search option also shows up on Yelp.com proper:

I’ve been using Yelp forever, and as far as I can recall, this is the first time they’ve ever added custom search filters for a video game. It all goes to show just how insane Poke-mania is getting. But, hey, speaking from experience, posting up at a bar that has a Pokestop over it and busting out a lure is a great way to catch Pokemon while drinking some beer.

I suppose if you live in areas where open containers are allowed, you could just walk around normally, but, alas. In Illinois we have to drink in bars like civilized people… Who drink Coors Light.