Tests can be stressful. I mean, that makes sense when you’re not confident about the material on the test, but sometimes tests that cover things you know very well can be even more nerve-wracking. You shouldn’t fail something if you know what you’re doing, right? Now imagine the test you have to pass is checking your humanity. You can pass that test, surely. Most of our readers have been human for a while, after all. That’s the premise behind Able Black (Free), an interactive fiction game where you play a freshly-booted android who has to pass his citizenship test before he can join society.

The basic structure of the game has you playing through several chapters that have you reading a fable of some sort, answering some questions without clear answers, solving some logic puzzles, and reading some text that moves the story forward. After each chapter, the game will give you a performance assessment and break down your personality based on how you answered each question and how well you were able to solve the problems. Your character, Able Black, has no idea what is going on in the outside world, and the computers administering his tests are unwilling to give him any information until he successfully passes his test, but there are plenty of hints laying around, many of them left by a previous test candidate. Piecing the mystery together is part of the fun, though the ending leaves a lot of questions unanswered. 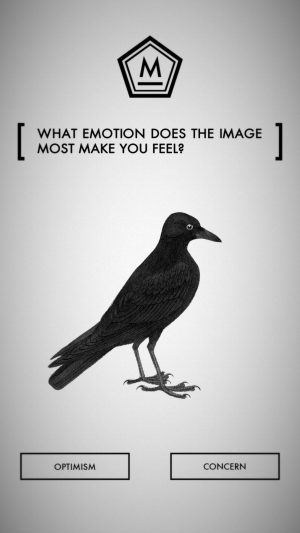 The premise of the story is good and the writing is readable enough, though there are a few out-of-place pop culture references that come off really awkward. You’re meant to be an android ostensibly waking up for the first time, but about halfway through the story, Able’s voice starts to sound less like a newborn artificial intelligence and more like a child of the 1980s. The payoff behind the backstory is a little predictable, but the journey there is still interesting enough even after you’ve pieced things together. The end of the main story isn’t the end of the game, either. Beating the game will open up the first of several Easter eggs that give you a few valuable scraps of information about the story. These secret modes run from things as simple as scrolling notes to as complex as an action game where you pilot a ship, avoiding incoming obstacles. They’re simple toys at best, but they greatly contribute to the idea that Able Black has more mysteries contained within it even when you think you’ve got everything figured out.

That’s largely an illusion, sadly, but it’s a good one. And it’s a particularly useful one here, because Able Black is a fairly short game even by the standards of the genre. Provided you don’t get snagged too badly by any of the puzzles along the way, you’ll probably have things wrapped up within an hour or so. You’ll wish there were more, and there’s certainly room for it, but for now, what you get is just barely satisfying. I appreciate that the game tried to avoid overstaying its welcome, though, and it couldn’t have been easy coming up with unique puzzles. None of the puzzles you encounter in the game are repeated at any point, though many of them will seem familiar to anyone who has curled up with a logic puzzle book or two. If you get stuck, the game offers a hint system where it will give you up to five different hints. Beating the game without taking any hints along the way gives you something a little something different in the outcome. 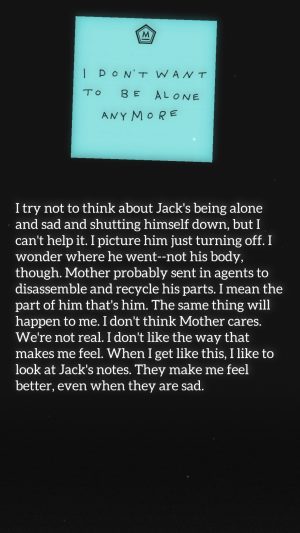 I found the personality questions based on the fables to be at the same time the most interesting bits and also the most frustrating. After you give your answer, the computer administering the test will always ask why. You have no input here. Your character will give an answer, though it wasn’t entirely clear to me if they were meant to be his answers or additional notes left by the mysterious previous occupant. While it’s often the case that Able’s answers here match what you yourself were thinking, it’s just as often that he goes with something totally different, shattering the immersion. That’s a bad thing, but once it’s done, it’s still quite fascinating trying to get into the head of the character you’re building with your choices. He’s you, but he’s also not you, and that works well with the kind of story Able Black is trying to tell.

As for the puzzles themselves, they’re generally not too bad. Almost all of them are solved by entering a few letters or numbers, or by choosing from some pictures. They’re complicated enough that brute forcing your way through would be a fool’s errand, but simple enough that you shouldn’t need to take notes or anything. As already mentioned, the variety of the puzzles is good, too. You get a nice mix of visual puzzles, straight logic puzzles, word play, and more. It’s a decent little box of puzzles to work your way through on a lazy afternoon.

In the end, Able Black‘s premise is probably stronger than its execution, but it’s nevertheless an enjoyable little thought exercise in more ways than one. It’s a peculiar place to be in, to have a computer judging you on your ability to pass for human. I’m not sure how I would have felt if I had failed. I’m not even quite sure if I can fail, to be honest. That’s one of Able Black‘s best tricks. It seemingly effortlessly gives the image that it’s more pregnant with possibilities than it really is, and it’s that aspect that makes it a fairly compelling piece of interactive fiction.