Movie tie-in games are notoriously bad, and movie tie-in mobile games even more so. Oftentimes the game’s release is tied to the release of the film, so development cycles are rushed in order to get the game out in time resulting in a far worse experience than if the game had the proper amount of time needed to develop it fully. But that’s not always the case, as the surprise release of Suicide Squad: Special Ops (Free) this week has shown us. It’s a wave-based first-person arena shooter of sorts starring three of the main characters from Suicide Squad, which opens in theaters August 5th. The mobile game is an arena-style survival shooter where you take on waves of enemies while also running around gathering up supplies to keep the party rolling. It’s pretty similar to the Call of Duty: Zombies ($4.99) games that were super popular on mobile a few years back. 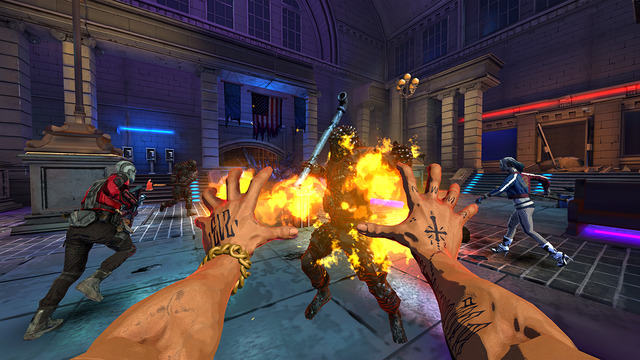 The craziest thing about Suicide Squad: Special Ops is that the entire game is free and there’s no ads, IAP, or any other monetization scheme to speak of. There’s a link to the movie’s trailer on the title screen, but that’s about it. This sucker is just some free fun. Another crazy thing is that the developer Sticky Studios has stated in the game’s forum thread that they built Suicide Squad: Special Ops from scratch in just 3.5 months. They had previous experience making an first-person shooter game, but still, this feels like a more polished effort than 90% of the games released that were in development for a much longer time.

It’s definitely a simplistic experience and there’s not really any story or anything to speak of, but Suicide Squad: Special Ops is one of the better first-person shooters I’ve come across on mobile, and Sticky Studios hints that they might expand what they’ve done here into a more full-fledged (non-Suicide Squad-branded) game at some point in the future. For something fun to toy around with over the weekend, I’d definitely recommend giving this one a free download.