We get a lot of really crazy incoming emails here at TouchArcade Towers because of how shockingly wide the larger mobile market actually is. Sure, we’re a web site that focuses on iOS games, but under that umbrella also kinda-sorta includes things like cases, chargers, headphones, drones, controllers, virtual reality headsets, and weird Bluetooth accessories of all kinds including but not limited to Bluetooth dice. So, in a roundabout way, when you get an email offering a AlienWheels Hoverboard with Bluetooth speakers for review, through a few Kevin Bacon-like degrees of separation it’s totally relevant, right? I mean, I can ride it while playing a mobile game, using the onboard speakers, and maybe even wearing a VR headset. All of these things are possible, and all of these things and more are what I did to put the black bluetooth hoverboard they sent me to the test… All while being ruthlessly mocked by friends and family. The things I do for TouchArcade, I swear. 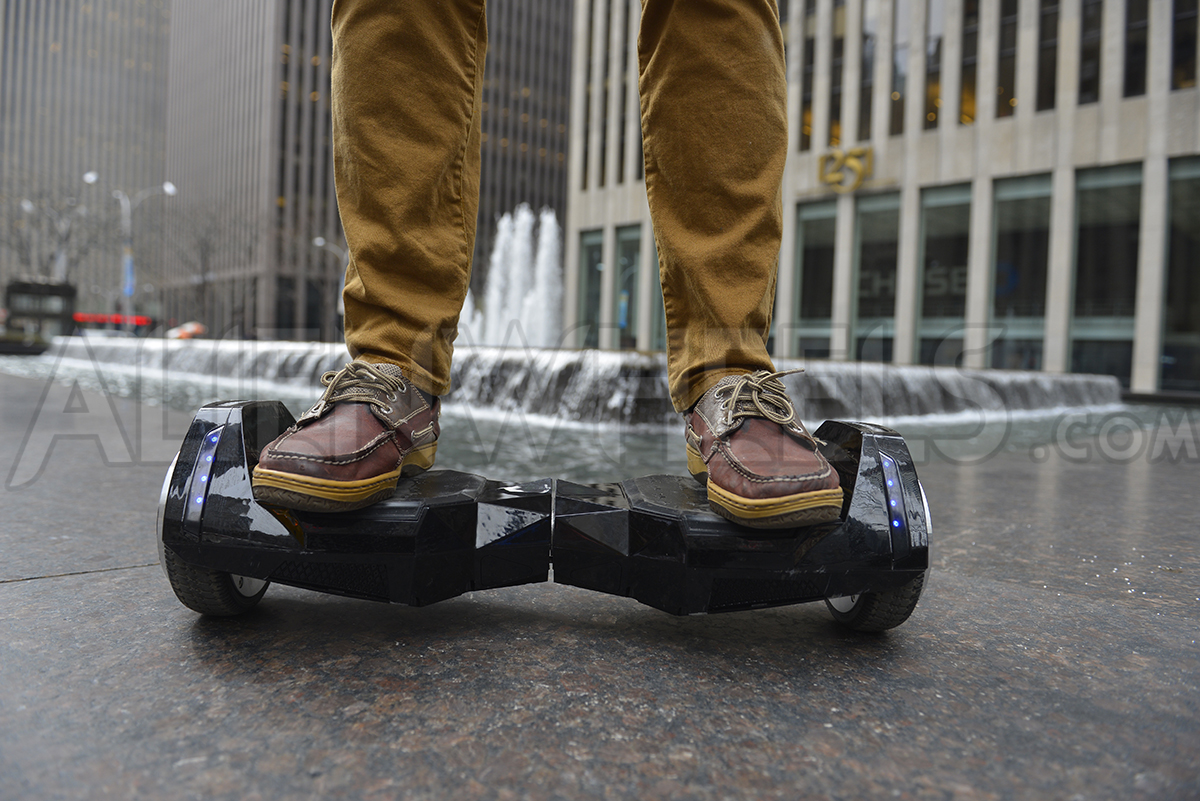 Unless you’ve been living in a cave for the past year or so, you’ve no doubt seen these weird two wheeled things all over the place. I think calling them “hoverboards" seems a little stupid, as this is what I imagine when I think “hoverboard," but I suppose “two wheeled balance board" really just doesn’t roll off the tongue as well. But, ya’know, I’m hip, so I guess “hoverboard" it is. Also you’d need to be dwelling in an even deeper cave to not hear all the controversy surrounding them exploding, being involved in shootings, and all sorts of other insane stuff. I’m happy to report that mine hasn’t caught fire, I haven’t shot anyone, or really done anything else to make the news. I got mine before the UL announced they were going to start certifying hoverboards, but AlienWheels is quick to point out that they use UL certified chargers and Samsung batteries. A part of me thinks the reason you hear about the few incidents surrounding hoverboards so much is because it’s the exact kind of thing you’d share with all your friends on Facebook, but, I digress.

Riding a hoverboard is actually shockingly easy. Like everyone else, I’ve also seen all the videos of people wiping out (or, if you want to search YouTube, “hoverboard fails" seems to be the way to go) so initially I was sort of scared to hop on. As mentioned before, friends and family all knew I got one, so it felt like everyone was waiting for the inevitable “Eli just totally fell flat on his ass and it was hilarious." I eventually gained a little confidence by convincing myself that skateboarding as a teenager likely taught me everything I needed to know about balancing, and tried to forget that it’d been at least a decade since I’ve even touched a skateboard. 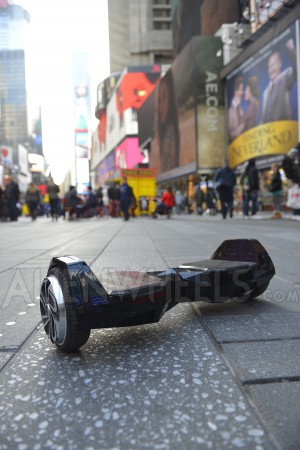 You start by turning the thing on, by pressing a little hidden button on the back of the hoverboard. From there, the internal speakers prompt you to pair a Bluetooth device. Naturally, you should take a break and open up your Bluetooth settings on your phone and get paired up so you can get some music cranking. (I found A$AP ROCKY went best with riding a hoverboard, as it most accurately represented what I’ve seen people playing on their hoverboards out in the wild.) It’s at this point where you need to learn the absolute most important rule about hoverboarding, and I’m talking don’t get Mogwais wet level of rule here: Always, always, get on and off of a hoverboard from the back.

On the most basic level, hoverboards function on a simple principle: When they detect weight towards the front half of the hoverboard they roll forward, and the inverse is true to roll backwards. The more you lean, the faster they go. So, what you see in most of the wipeout videos is people losing their balance, leaning forward too much, then transferring their weight forward to get off from the front. In doing this, you’re telling the hoverboard “I want to go full speed ahead." If you’re trying to get off, this is obviously the exact opposite of what you want to be doing. Each side of the hoverboard moves forward and backward independently too, which is another important thing to keep in mind.

When you step on from the back, the hoverboard will want to roll backwards into the foot you’re putting weight on with. The trickiest part of the whole thing when it comes to riding a hoverboard is the transition between bracing yourself to keep the one side with your foot on it from rolling back while quickly hopping up with the other foot. Until you get used to it, the best thing to do is use something like the back of your couch to hold on to so you don’t totally eat it, as there’s an initial very awkward feeling while you get used to standing balanced so you’re perfectly stationary. From there, the next step is to slowly start leaning forwards and backwards (again, you can do this along the back of your couch keeping one hand on it to steady yourself) to learn how little of your body weight you actually have to shift to get moving. Again, this is another thing you can identify people doing wrong in videos where they fall. At no point do you ever need to do anything beyond just slightly shifting weight toward the balls of your feet back to your heels.

The next step of successful hoverboard piloting is learning how to turn. This is going to sound super awkward, but I promise it makes total sense once you do it. The easiest way to think of how it works is by imagining how a tank turns. Tanks obviously have treads on each side that can move independently back and forth, but they can’t actually turn. Hoverboards are similar, the wheels themselves don’t actually turn like the front wheels of a car would. So, to rotate in place counterclockwise you balance so you’re standing still, then shift the weight of your left foot forward while you shift the weight of your right foot back. To go counter-clockwise you do the exact opposite. 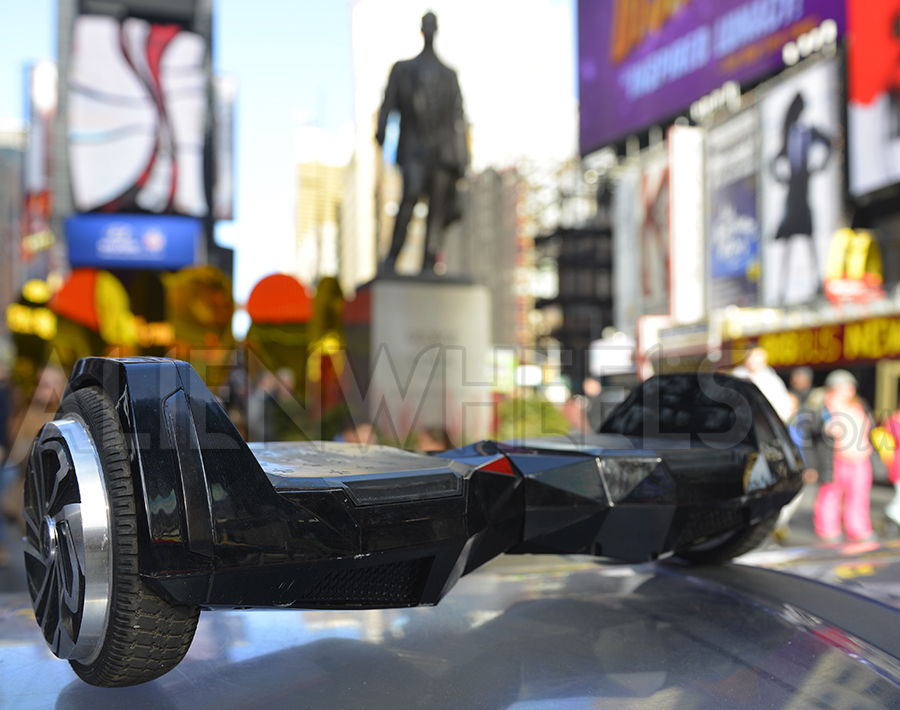 Turning while moving is easier to visualize, as you just apply more weight to the ball of the opposite foot of the direction you want to turn. Doing this, you’re telling the hoverboard “Make the left wheel spin a little faster than the right," which brings the left side of the hoverboard around faster than the right side, letting you turn. It’s easy, I promise, and after reading how hoverboards work you should now understand the massive importance of always stepping off from the back.

Really, the only thing that’s been tricky to learn is how to go over bumps on a hoverboard. I can ride around my house like a pro, as I’ve got hardwood floors which are very hoverboard-friendly but between the hardwood in the rest of my house and the tile in my kitchen is a wood threshold to (obviously) make for a seamless transition between the wood and tile. What’s difficult about this is I’m not exactly tearing around my house at full speed, so at low speeds this tiny threshold is enough to stop the hoverboard and I’ve got to learn forward more to tell it “Give it a bit more juice to get over this bump."

The problem here is that the hoverboard itself is just doing what you’re telling it to do by leaning forward: Go faster. Thing is, as soon as you cross the threshold you very much don’t want to be going as fast as you’re leaning forward for. Advanced hoverboard riding is all about how quickly you can transfer  your weight to apply more power to the wheels then quickly recover back to where you should be standing to go forward at the speed you want. Once you get used to that, well, you can basically live on your hoverboard. The footprint is barely wider than your shoulders, so I can just buzz all over my house with it. A personal achievement came from navigating the hallway, heading into the bathroom (going over another threshold), and taking a leak- All without getting off and listening to music blasting from the hoverboard’s speakers. Welcome to the future, it’s a beautiful place. Once you can do that, well, there’s really no limit to what you can do on your hoverboard.

So, yeah. I guess it’s hard to really review what makes the AlienWheels hoverboards any better or worse than the other hoverboards out there, as I have absolutely zero frame of reference to what other hoverboards are like. That said, it works really well, has tons of really silly LED’s, playing music from the speakers while riding around is hilarious, and, best of all, it hasn’t burnt my house down. The build quality of my Alienboard Batwings model is great, and it’s actually way heavier than you’d think it would be which seems like a good sign. It’s got actual rubber tires (I guess the cheaper ones don’t?) which make for a smooth ride on all the surfaces I’ve tried it on. The weather in Chicago here is still deciding whether it’s winter or spring, but I’m super stoked to ride this thing all over my neighborhood as soon as it’s nice enough out. If you follow me on Twitter, you’re surely fully aware that I’m in to all manner of ridiculous stuff, so a hoverboard fits perfectly into the Hodapp Lifestyle™.

If you’re like me and on the level of being an adult who is basically a child into weirdly expensive toys, you also need a hoverboard. Or, if you’re an adult who has an actual child who might be into these things, well, AlienWheels seems pretty legit. Keep in mind it’s possible to save some money on a hoverboard, it should be pretty easy to find coupon codes online with a simple Google search to knock $100 to $200 off an AlienWheels hoverboard, and presumably other brands offer similar things.

…Just remember, always get on and off from the back. If you take nothing away from this article but that, I consider this mission accomplished. And hey, even if you think hoverboards are dumb as hell, at least you know how they work now.