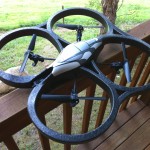 We’ve been excited for the Parrot AR.Drone since we first heard about it early this year. After a few different hands-on opportunities at various conventions, it was hard to not see the amazing potential the device had once you got it outside of the little 10 foot by 10 foot tent that was home to its demonstrations. After spending an entire week with the Parrot AR.Drone, it does have some down sides, but is still the coolest RC toy I’ve had a chance to play with.

The Parrot AR.Drone is a quadricopter that is piloted using an iPhone, iPod touch, or even an iPad. When the device is powered up, it starts broadcasting its own WiFi network. Using the companion Free Flight [Free] app, you connect to this wireless network and begin controlling the unit. The network it creates isn’t encrypted at all, but the AR.Drone does bind itself to the first device that connects to it to prevent other people from hijacking your flight session. Unpairing your phone is as simple as pressing a small button on the underside of the device. 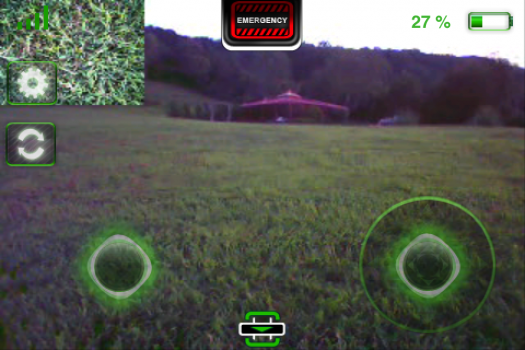 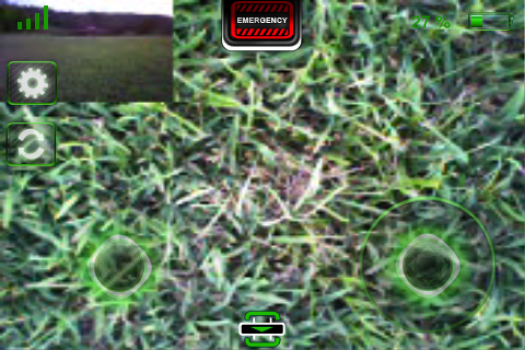 Just below the camera cycling button is a button that allows you to edit the settings of the device. From here you can tweak nearly everything such as how quickly it will climb, how much it will bank on turns, how sensitive the iPhone controls are, and even the SSID the AR.Drone broadcasts. Also in the settings is what kind of shell you’re currently using and whether or not you’re flying outdoors.

Included with the Parrot AR.Drone is the large indoor shell which protects the propellers from bumping in to things as you fly it around your house as well as the much sleeker outdoor shell. Swapping these is easy, they fit over the front facing camera and are secured on the back with a magnet. Outdoor hulls are available in three different colors for $20 each, and a replacement indoor hull will run you $30.

The first thing you notice with the AR.Drone when you pull it out of the box is just how incredibly light and fragile the whole unit feels. The two different hulls and the body of the unit itself are made of EPP, or Expanded Polypropylene, a material that is widely used in most RC aircraft. It’s able to bounce back and retain its shape, but just like other RC aircraft, I don’t see the AR.Drone being able to handle much abuse. Thankfully, Parrot has an entire online store with every part you’d need to completely rebuilt your AR.Drone if you had to.

Flying the device itself is very easy, although doing anything more than just basic maneuvers requires a bit of getting used to. In the Free Flight app, tapping the button at the bottom of the screen causes the AR.Drone to either take off or land. From there, holding your thumb on a button on the bottom left side of the screen allows you to move the unit forward, back, or side to side by tilting the device you’re running Free Flight on. Turning side to side and adjusting your altitude is accomplished using a virtual joystick of sorts on the right. If you get in trouble, an emergency button on the top of the screen immediately kills power to the propellers.

It’s amazing just how much the AR.Drone does for you. It comes packed with some fairly advanced circuitry that will do everything it can to keep the device level. If you ever lose your connection to the AR.Drone WiFi, it just stops itself then slowly lands. Using sensor data from the bottom of the device, it can keep itself hover in place, even outside in a light breeze. Aside from actually running into something, the AR.Drone is also very difficult to crash, even when you’re intentionally trying to get it to lose control. If it senses that it’s about to tilt too far to one direction or otherwise lose control, it will abruptly correct itself. 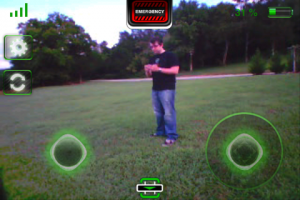 It’s really cool to see all these systems working in tandem, and if you’ve ever fiddled with other RC helicopters before, how idiot proof the AR.Drone is in comparison will amaze you. Unfortunately, because flying the device is such a cool experience, the first thing you immediately come to grips with is just how short the battery life is. On a full charge, I was able to fly the unit outside for around a half hour (or less depending on wind conditions) and indoors I was able to juice an additional 15 minutes or so out of the battery for a total flight time of about 45 minutes. Charging the battery back up takes an hour and a half.

Another unfortunate drawback to the AR.Drone is just how mediocre the cameras on the device are. The forward facing camera sports a resolution of 640×480, and Parrot claims it delivers this video feed at 15 FPS, but in my testing the frame rate was rarely anywhere near that, or very constant for that matter. The bottom camera is a much lower 176×144, but can display 60 FPS according to Parrot. In my testing, video from the bottom camera is a lot smoother, but it is very difficult to fly the unit using only the bottom facing camera. Because of this, more often than not I just flew the AR.Drone like I would any other RC toy in that I just watched it in the air and used my iPhone as an incredibly elaborate controller.

Without a shell on, the AR.Drone can lift very light loads, allowing for things like high definition helmet cams to be strapped to it for some better video. For instance, I found this video on YouTube of an AR.Drone with a Contour HD 1080p camera onboard:

Once you spend more time with the AR.Drone, other limitations begin to become increasingly noticeable. For instance, with the height limiter enabled in the options, the AR.Drone will only climb to around 20 feet off the ground which is as far as the sensors under the craft can detect. With the height limiter disabled, you can climb much higher, but flying the unit becomes incredibly difficult as it’s no longer capable of hovering in place once you exceed the capabilities of its bottom-fancing sensors.

Testing the vertical capabilities of the device was the only time I had to use the emergency button. Once you take away the AR.Drone’s ability to figure out where it is in relation to the ground, it loses its ability to correct its location. Flying the device on what I’d call a fairly calm day resulted in it almost being blown into some trees when a small breeze picked up. In comparison, in similar conditions closer to the ground the AR.Drone barely moved at all. 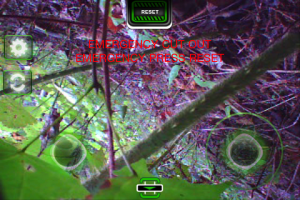 Also, since the whole device operates on WiFi, you’re constrained by the range limitations of both the AR.Drone and the iPhone. Parrot is claiming you can operate the device from 150 feet away, which seemed a little optimistic in my testing. Thankfully, all the cool auto-pilolting stuff I mentioned earlier comes in to play when you lose your connection to the AR.Drone and it just flies in place waiting for you to get back in range and resume flight.

Overall the Parrot AR.Drone seems like a very 1.0 device with loads of potential both in future hardware revisions and in future development with the AR.Drone API. Improved battery technology, higher resolution cameras, and more powerful sensors to allow for higher flights are all things I would love to see in future models. Currently the only companion app available for the AR.Drone is the Free Flight app, but Parrot has promised other apps such as augmented reality games where two players with their own AR.Drones can have virtual dog fights, and other similar things. None of these were available at the time of this review, but I definitely can see the amazing potential for future software development.

Parrot is boasting a completely open API for developers to program their own apps to interface with the AR.Drone. While I’d love to think that there are going to be all kinds of different third party apps for the device, I really can’t imagine many developers devoting resources to projects that not only require you to own an iPhone or iPod touch, but also a Parrot AR.Drone– Especially considering the mediocre uptake that iPad-only games have seen, and the iPad’s market is likely exponentially larger than that of the Parrot AR.Drone.

However, if you’re interested in RC aircraft and have dabbled in iPhone development, I really can’t think of a much better toy to own than the AR.Drone. Throughout all my testing, I kept thinking “The AR.Drone would be cool if it did _______." If you’re capable of utilizing the API to build an app that fills in the blank for whatever awesome functionality you come up with, $300 for the AR.Drone seems like a worthy investment for hobbyists.

While the Parrot AR.Drone is the coolest RC Toy I’ve ever played with, it’s hard to give it a strong general recommendation given the current lack of software. It also would have been nice to see Parrot bundle a second battery in with the unit since additional batteries are pretty much required if you’re serious about flying the device. If you’re OK with waiting to see what additional apps get released, and you’re patient enough to deal with 90 minute recharge cycles, flying the AR.Drone will likely be one of the most awesome things you’ll ever do with your iPhone.

The Parrot AR.Drone is currently available at Brookstone for $299.99. They offer a number of accessories with it, including extra batteries for $29.95 and both two- and three-year service plans– although it’s not entirely clear if crashing the device in to a tree constitutes as “normal wear and tear" in the eyes of Brookstone’s warranty department.