We don’t typically post about non-gaming accessories around here, but we’ve been on a bit of a quest (or at least I have, anyway) for the best case for the new iPhone 6. I’m pretty careful with my electronics, and while I’ve personally dropped various iPhones a bunch of time, I’ve been lucky enough to never crack a screen or really cause anything more than a small scratch or scuff. The problem is, the stupid amount of people I know personally and have seen in the wild with cracked screens have fostered this insane paranoia of mine where continuing to not use a case means a shattered screen is more a matter of when rather than a matter of if. 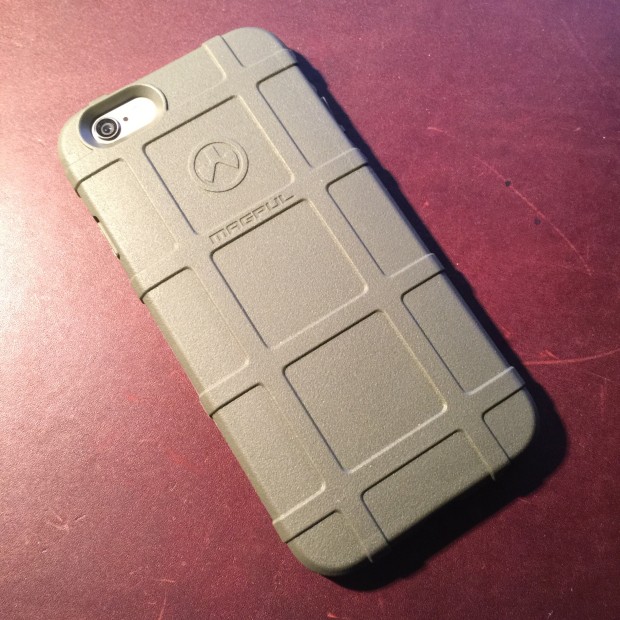 With my iPhone 5, I rocked Speck CandyShell and absolutely loved it. When the iPhone 5S came out and Apple released their line of leather cases, I jumped ship to one of those. It did everything that I liked about the CandyShell, in that it covered the whole device and provided a nice front lip so when you put the phone on a table screen down, it’s resting on the case rather than the screen. Additionally, the leather made it so it slid in to and out of your pocket that much easier.

When the iPhone 6 came out, I looked for something similar. Specific qualities I searched for included:

On launch day, the only cases that were available were the Apple iPhone 6 cases. I eventually ended up picking up both a leather and a silicon variety. They both were okay but neither felt like they offered that much protection. Additionally, whether or not it really matters in real world use, I really didn’t like that the whole bottom of the phone was exposed in the Apple designs. As far as pocket-ability was concerned, the leather case pulled ahead of the silicon one. The Apple silicon case feels a lot like a other cases made of a similar material in that it’s just barely grippy enough to make it grab on to the pocket lining of your jeans when you pull it in and out. It didn’t feel any more grippy in your hands, so this “feature" was just sort of annoying.

Frustrated with Apple’s offerings, I moved on to the iPhone 6 Speck CandyShell as I had such great experiences with the previous generation models. …And it was actually sort of amazing just how bad this year’s CandyShell is. First off, the back bows out so it doesn’t sit flat. This lets you quite literally effortlessly spin your phone like a top. It’s almost sort of laughable just how long your phone will spin, with even the slightest movement. Also, whatever materials Speck used this time around are just plain bad. The back plastic scratched so easily inside of a couple days my iPhone 6 CandyShell looked worse than my iPhone 5 CandyShell after a year of use. Oh, and the rubber that makes up the front lip and the button protrusions is laughably grippy, to the point that it was causing so much friction with my pocket when I pulled it out that layers of the rubber were peeling off.

Hilariously enough, I emailed Speck support about this and while they offered to send me a replacement they warned that it would likely have all the same “features" because of the molding process they’re using now. So, the iPhone 6 CandyShell was banished to my junk drawer. 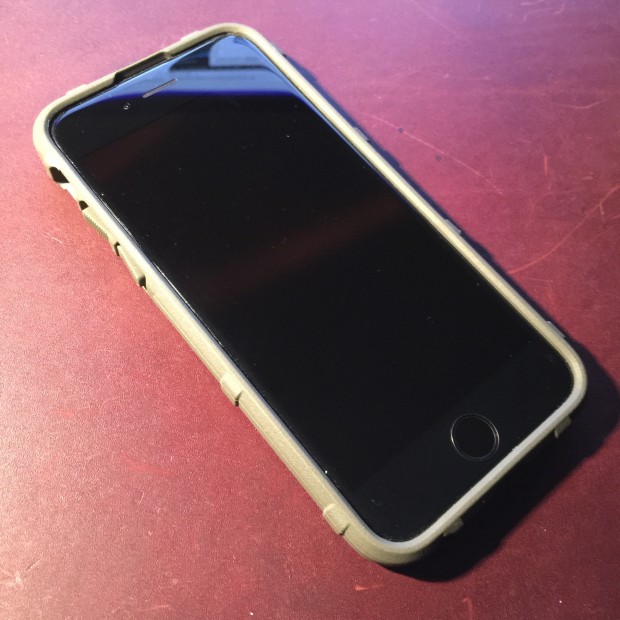 Looking around for other unique designs didn’t offer much. Otterbox is selling cases which are very much Otterbox, and I’ve always avoided them for two reasons: First off, I’m just looking for a case to make my phone survive the occasional accidental drop, but use as a hockey puck. Secondly, the cutout to show off the Apple logo always felt extremely tacky to me. That also disqualified a bunch of other cases. The Spigen Style Armor seemed promising, but the bottom and top pieces are held on by friction alone which isn’t a great solution, as historically using two piece case designs like this involves eventually using a piece of tape to hold them together which always seems too janky.

Aside from those, most other accessory manufacturers seem to be using the exact same design for a rigid snap on plastic case. If you’ve looked at the cases by Michael Kors or other “designer brand" cases at the Apple store, Target, or wherever else, you likely know exactly what I’m talking about. They’re all the same case with a different design printed on them. That’s great if you’re really wild about Michael Kors, Kate Spade, or whatever else… Not so much if you want an actual iPhone case.

Disappointed with what everyone else is selling, and still on the hunt for the perfect case I caught this post over on MacRumors for the Magpul Field Case (also available for the 6 Plus). I figure, what the hell, I’m invested to the tune of well over $100 right now searching for an iPhone case I like, so what’s another $17. This might have even been the cheapest case I’ve bought so far, come to think of it. 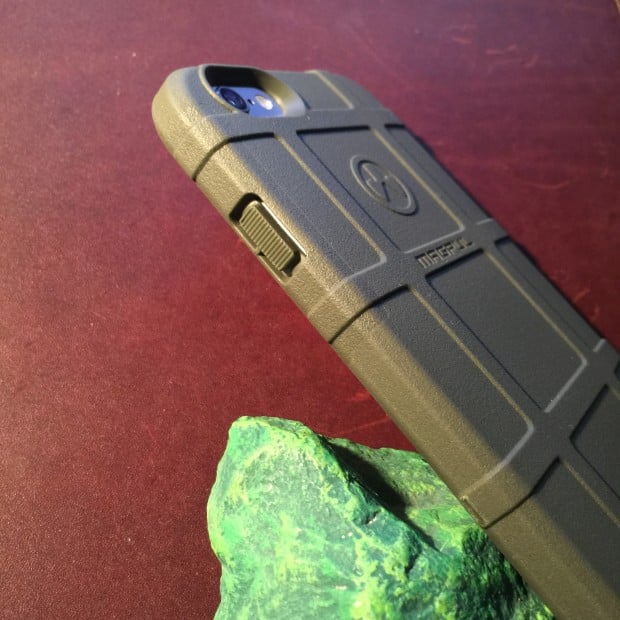 If you haven’t heard of Magpul before, don’t worry, I hadn’t either. They make all sorts of firearm accessories, with their flagship product line being the PMAG rifle magazine. I’m not particularly wild about guns, or gun stuff in general, but, hey, whatever. I’m probably on some kind of list now from ordering from them. Apparently what makes the PMAG so good is the type of plastic it’s made out of, which is the same material they use on the Field Case.

About a week later it came via FedEx, and I’m in love. I like this case so much I’m posting on TouchArcade about it. It checks every box of what I was looking for in an iPhone case to an extent that sort of blows my mind. It’s pretty slim, slimmer than the CandyShell anyway, and feels like the perfect balance between not really worrying if my phone falls off my desk and not just being ridiculous like an Otterbox. It covers all sides of the phone, with openings for the speaker, lightning port, and headphone jack. The raised lip on the front of the case is far more significant than the Apple cases, so placing the phone face down is fine.

The plastic they make it out of is almost magical, too. The Apple silicon case and (seemingly many other) cases that use a similar material gets is grippyness from the plastic being sort of sticky, for lack of a better way to put it. Problem is, this material doesn’t care what it’s gripping to. It’s likely used because it holds to your hand better, but it also sticks to everything else, which results in the pocket annoyance I’ve repeatedly mentioned.

In the case of the Magpul Field Case, two things provide grip: The grid protrusions which give you something to hold on to, and the plastic itself has a texture that’s best described as being like a fine grit sandpaper. This results in a nice grip in your hand, without it grabbing on to your pocket at all. I don’t really understand how it works so well, but it slides in and out of your pocket almost as well as just a naked iPhone while feeling substantial in your hand. 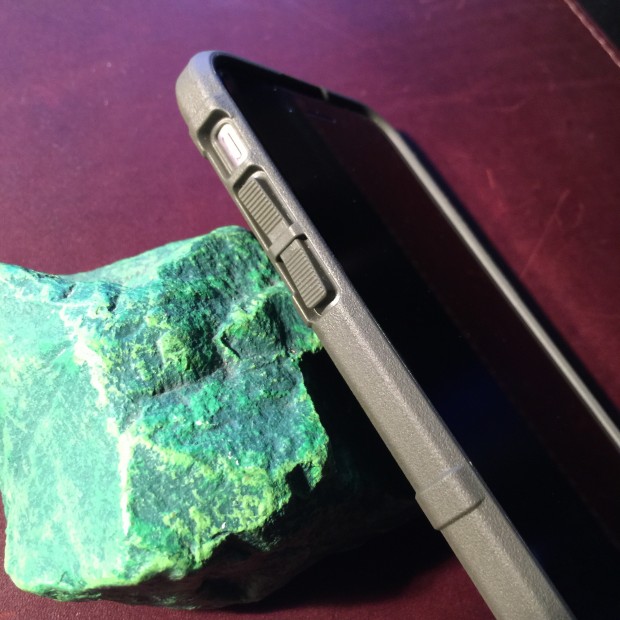 Many of these semi-rigid cases falter in the button department, as a lot of the ones I’ve tried either just have cutouts to use the power and volume buttons of your phone directly which seem awkward or just have nubs that stick out indicating where those buttons are which you always have to press way harder than just using the button as you’re actively flexing the entire case to get them to activate. In the case of the Magpul Field Case, they’ve somehow designed the side buttons to effectively have plastic hinges they use, making changing the volume and locking your phone surprisingly effortless for this kind of case.

Oh, and it looks rad too. I’m a sucker for anything that’s olive green, which doesn’t seem to be available anymore, but considering they just released these I’m guessing it’s just an availability issue. Searching on Amazon shows all sorts of other colors for previous generation devices. I emailed asking when they’ll have other colors, and wasn’t really able to get any details beyond “soon." If you don’t want to deal with ordering direct, you should be able to pick these up anywhere that Magpul stuff is typically sold… So consider this probably the only time in the history of TouchArcade that we’ll end an article with:

So call your local gun store…?