We’ve been reporting on Star Wars: Galaxy of Heroes (Free) since it was announced back in June of this year. As a freemium hero collecting turn-based game, there’s obviously a lot to keep track of in turns of currency and timers. While that’s obviously a turn off for a lot of players, there’s plenty here in terms of depth and character variety to make it worth trudging through for Star Wars fans. Thus, the purpose of this guide is to get new players acclimated to the freemium systems in the hope that they’ll be able to enjoy what Galaxy of Heroes has to offer.

One of the first things that should be done whenever you play a new freemium game for the first time is to take stock of all the various elements that you’ll need to keep track of. In general, there are three major freemium elements to keep track of in Galaxy of Heroes: Timers, Currency, and Random Packs. To put it bluntly, there’re a ton of different timers and currencies that need to be monitored. Specifically, there are two general energy timers for the primary battles (one timer for Light/Dark side battles and another for Cantina battles). Galaxy of Heroes also employs daily timers to prevent players from replaying the same mission over and over (unless you feel like shelling out premium currency). 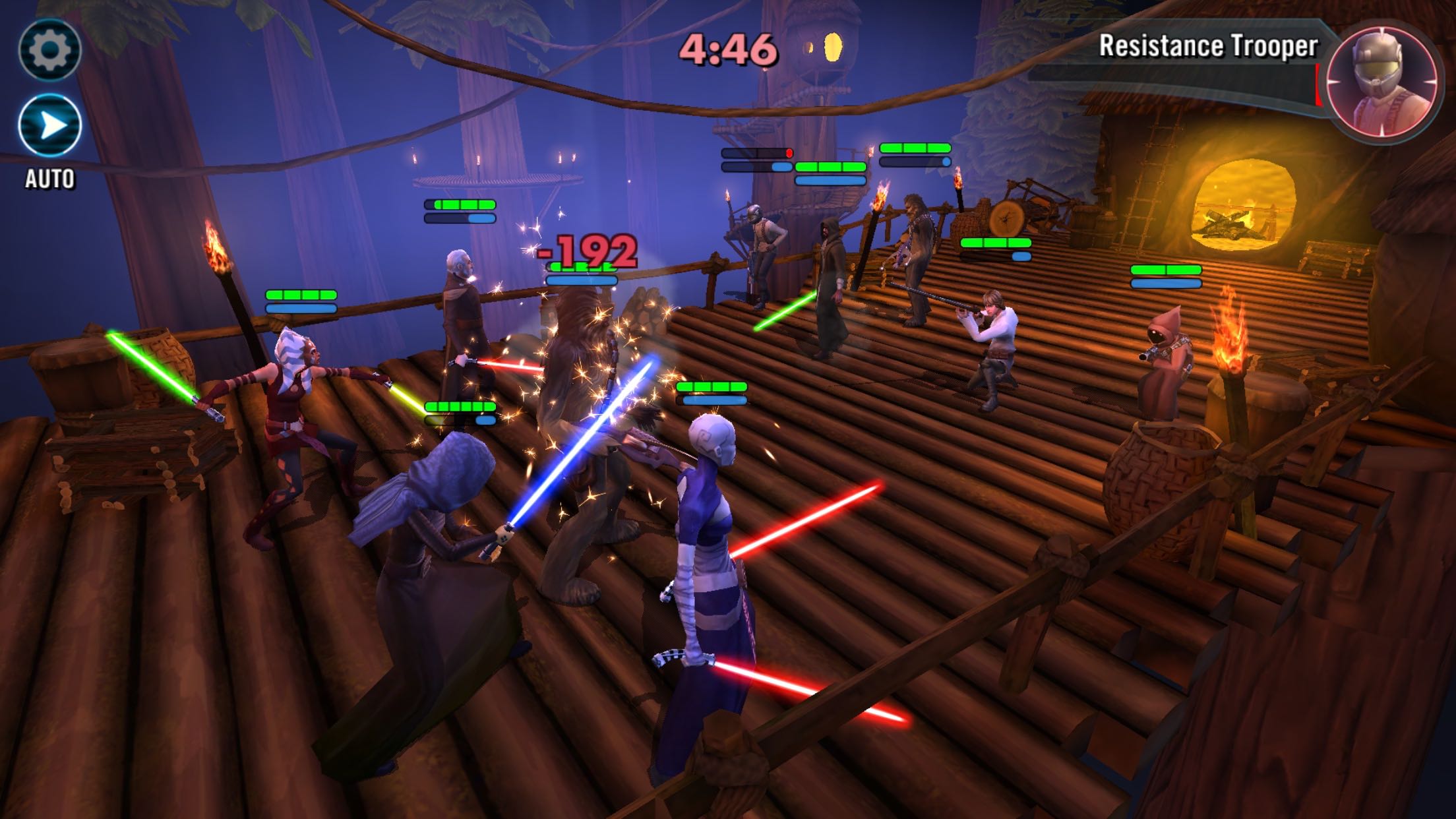 There are also no less than half a dozen currencies to keep track of, including a general currency for upgrades and purchasing items, a premium currency, a currency that’s earned while playing Cantina Battles, and a separate currency for completing Arena Battles. There are also additional currencies earned via playing Challenges that can be used to upgrade character abilities. For players that haven’t yet dove into Galaxy of Heroes, consider the above an succinct review of exactly what you’re getting into. While this is a ridiculous amount of things to keep track of, the most important thing to remember is that the premium currency is the only one that can be purchased at any time via IAP, and said currency can be used to either purchase blind packs (which we’ll get into momentarily) or as a way to bypass the various timers stated earlier.

Finally, the blind packs are one of the way to unlock new characters to use in your party. As you might imagine, premium packs require premium currency and  can either straight up reward new, higher-end characters to use or character shards which can either be collected to unlock the character or can be used to upgrade the hero if you already have them. Meanwhile, the standard packs work in similar fashion but for lower tiered characters (and there’s also a far less likelihood of straight up unlocking characters).

So now that we have an introduction to all the elements at play we’ll focus on a few tips for each of the three major areas above, as well as some additional guidance on how to effectively upgrade your heroes.

One of the way that Galaxy of Heroes tries to throw the player a bone is in its Sim Tickets, which are earned during normal play. Whenever a battle is three-starred, the opportunity opens up for players to bypass replaying the battle and instead go straight to the rewards with the use of a Sim Ticket. Sure, energy is still expended (as well as the ticket itself), but depending on the difficulty of the battle, players can save a few minutes with the ticket.

While Sim Tickets are earned regularly through both battle rewards as well as challenges, like everything else in a freemium game it’s also a finite resource. Thus, it’s a good idea to use them smartly. For example, I wouldn’t be using them in Normal battles, since auto-battle is typically executed well with little surprises. I also wouldn’t use them during extended play sessions where you plan on actually devoting a decent amount of time to the game. Rather, I’d restrict them primarily to Cantina Battles (which are typically long and difficult, regardless of whether you’re using auto-battle or not) or as quick ways to pick up a particular piece of equipment if you’re trying to upgrade your hero (if the equipment you want is on a normal battle, then just play it and put it on auto-battle). That way, you can maximize the amount of time saved when using a Sim Ticket.

Galaxy of Heroes has a pretty neat auto-battle that not only makes the fight decisions for you but also speeds up the entire flow of the battle. It’s also a nice way to get some battles done while you only half-pay attention to the game. I will caution you, however, from taking your complete attention away from the game during auto-battle. The AI has a habit of prioritizing special abilities and enemy targeting in weird ways that are typically to the overall detriment of your party. A relatively easy battle when you’re controlling it can sometimes turn into a 1 or 2 star affair due to some of your heroes being taken out. With that in mind, I recommend limiting the use of auto-battle to Normal or Hard battles that you’ve already played and have a fairly good idea as to whether or not you’ll win even with dumb moves being made. I also wouldn’t recommend using it with new battles because of the higher chance of losing a hero (and thus losing a star) and I definitely wouldn’t recommend using it in Cantina Battles simply due to the length of most battles. 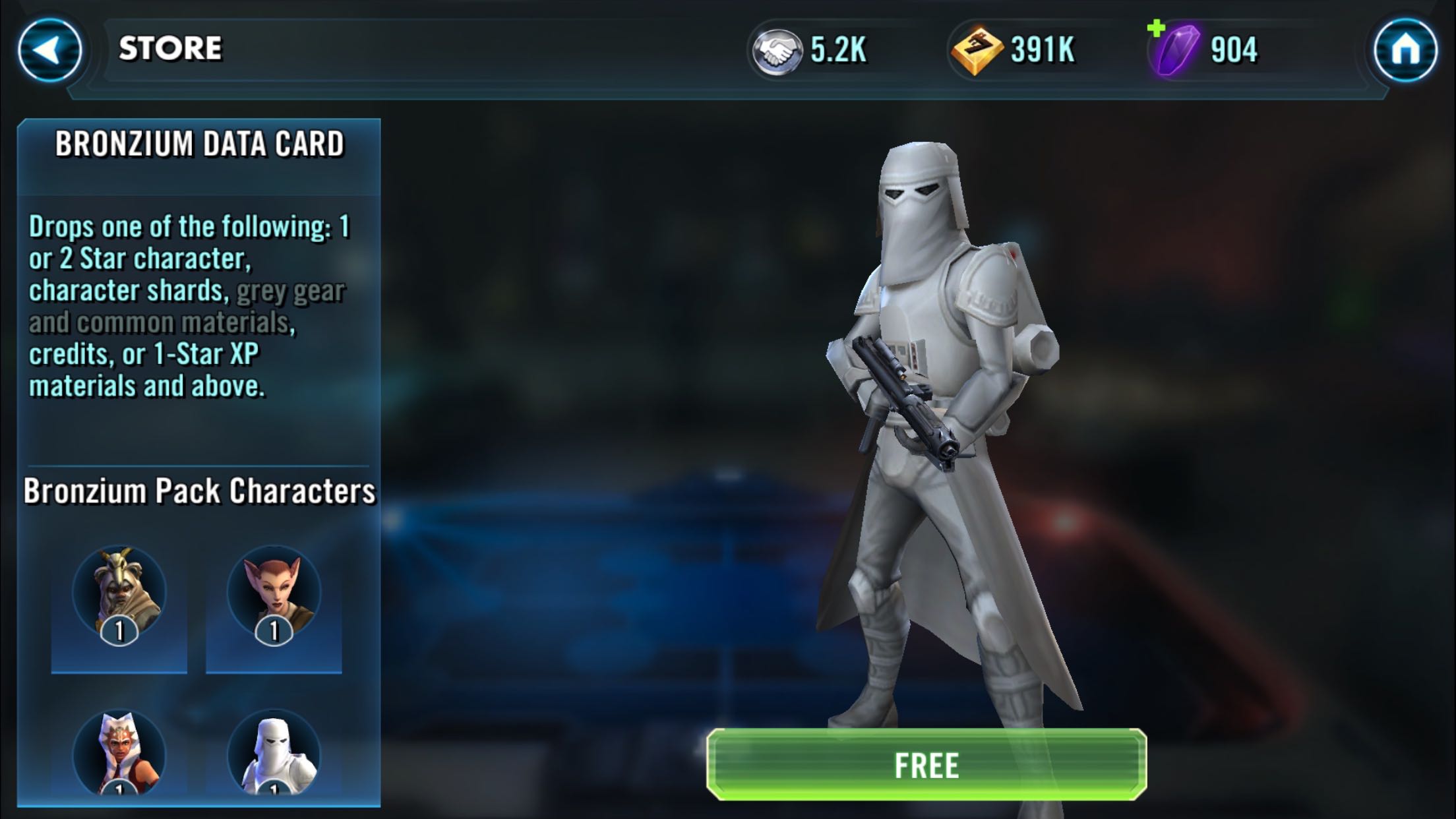 This can be a tough one to follow depending on what sorts of high-tiered heroes you have. In general, you want to have at least one hero with healing abilities and one hero with defensive abilities (whether it’s a taunt or one that bestows defense). The rest of your team should be filled with various damage dealing heroes. If you’re in the position where you have a lot of higher tiered heroes that don’t balance out in this matter, you may be tempted to just play the tier game and ignore balance. This may or may not work because having those heals or defensive moves, even on heroes that are less powerful than those left out of the battle, may end up saving the rest of your heroes in the future.

Energy mechanic tips are always taken into consideration when talking about freemium games, and Galaxy of Heroes is no exception. Whenever a player earns a level-up, they typically earn bonus energy (and occasionally an increase to the maximum energy that can be stored). If you keep tabs on your experience and energy reserves, it’s possible to use the bonus energy to your advantage. For example, if you’re near the end of your run, your energy reserves are low and you know one more battle will earn you a level up (and thus bonus energy), it might not be a bad idea to end it for the night until the next day. That way you’ll level up with near full energy reserves and you’ll have wasted less energy (as opposed to leveling up the night before, getting bonus energy, and still ending a run). There are also the standard tips that are indicative of rewarding multiple logins per day, such as never letting an energy reserve reach full (unless it’s in the middle of the night and you’re asleep).

The reason why I went into significant depth into all the available timers is so that way you’ll have a good idea as what you need to juggle in order to efficiently manage your time while playing Galaxy of Heroes. In general, players should focus first on Challenges and Arena Battles, as those have timers attached to them after just one battle (in addition to the free Bronzium card pulls). Afterwards, I’d focus on any particular hard battles that have character portraits or equipment that you’re looking for (each battle has a limit of three per day so it wont’ be hard to play through them). Finally, feel free to focus on the Cantina and Regular Light/Dark battles until you either expend your energy or the Challenge/Arena battle timers are up.  The point is to make sure that you’re not focusing on just one aspect of Galaxy of Heroes the entire time because otherwise you’ll be missing out on partaking in activities that reward without taking  core energy.

Besides the lengthy diatribe on the freemium mechanics of Galaxy of Heroes, there’s also a game underneath it all that’s worthy of some discussion. Some of the biggest questions that any player will have will be how to allocate Ability Materials, which are earned during Challenges and Cantina Battles and are used to upgrade the effectiveness of the attacks and special abilities for each hero. Ability Mats are always in demand and once you have a full Light and Dark team it’ll be a tough decision as to what to upgrade first. 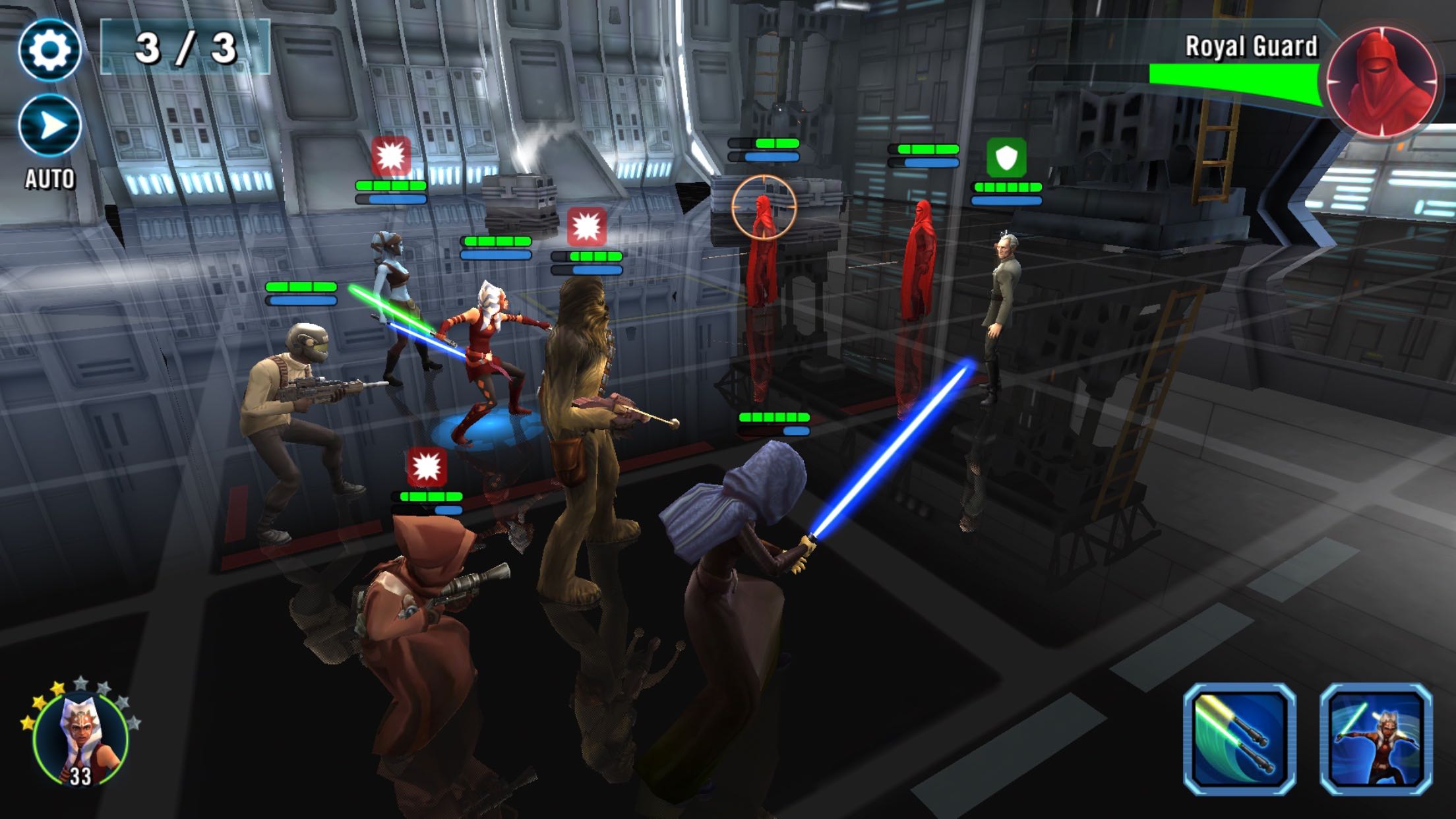 My recommendation would be to prioritize ability upgrades that are either associated with defensive or healing abilities first. In addition, if there are any first tier upgrades that have some pretty significantly upgrades, such as lowering the amount the cooldown of an ability after use, I’d work on those next. Ability upgrades that raise the proc percentage would follow on my list, and finally abilities that simply offer an effectiveness upgrade would be last. My priority is based on my emphasis of balance and needing healing and tank skills, and since those are the most important in my book, that’s why I have them first. Obviously, if your play style differs from my philosophy, you may have a different priority list.

Recommendations for equipment are in a similar vein to my above comments, but I’d also recommend prioritizing equipment for the lower tiered heroes that you’re using on your team. The reason for that is as follows: since they are lower tiered, they aren’t getting as much of a boost per level-up as higher tiered characters are. Therefore, equipment upgrades, which offer raw stat boosts, are a “better bang for your buck” for these heroes than leveling, which should probably be prioritized for the higher tired heroes. Obviously, you want to upgrade everyone on your team as quickly as you can, but giving the equipment to those heroes that need it most makes most sense.

Ok, all of the tips we’ve given thus far will work regardless if you’ve spent a single penny on the game. With that said, I only have one tip for you if you are fortunate enough to have money to spend on the game: spend it on bundles. Galaxy of Heroes will occasionally throw bundles your way that offer guaranteed character unlocks, portraits for tier upgrades, experience materials, and currency. If you’re looking to spend money, and you see a bundle that has characters you actually want, I’d recommend just buying it outright. Earning characters, even if you do it as efficiently as possible by following our guide, is a lengthy affair that will take many days of play. It goes without saying, but you’ll save a lot of money simply buying a bundle and the supplemental benefit is that you’ll be able to enjoy the rest of the game with heroes that you’ll actually be invested in.

That about covers everything that can be said for getting started in Star Wars: Galaxy of Heroes. Hopefully following our recommendations make the game just a little more enjoyable for folks checking it out.