There are two kinds of musicians in the world: those who like Guitar Hero, and those who don’t. Okay, there are probably musicians who are indifferent to the whole phenomenon, but whatever. The point is, as someone who plays a variety of instruments in real life, I have my fair share of musician friends who think rocking out with plastic guitars is stupid. “Why not play real guitar?" they cry, while stroking their hipster beards and drinking PBR. Well, because real guitar isn’t a game, and sometimes I just want to play a game. I unashamedly love Guitar Hero, and I was absolutely stoked when I heard there was a new one coming out, and iOS would be getting an un-neutered version. Well, after playing it for several days, I can say that not only is Guitar Hero Live (Free) indeed (nearly) identical to the console versions, but in some ways it actually might be better than the PS4 and Xbox versions. Potentially. 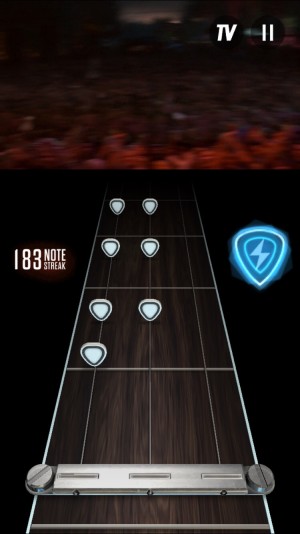 I say “potentially", because unfortunately both Eli and I have a nasty bug that prevents the game from connecting to Game Center. I could probably live without it, but the game actually needs Game Center in order to play. Thanks to the comments in our earlier article, I found a workaround that involves disabling Wi-Fi and playing exclusively on my iPhone with a cellular connection. And while it was great to finally be playing the game, watching the action on a tiny screen while holding a plastic guitar… isn’t ideal. My fingers are crossed for a quick update, because I have a feeling playing on an iPad (as I had originally intended to) would be really awesome. (Note: Just as I was finishing this review up, Eli alerted me to a new fix that allows the game to be played on any connection. Just go into your router settings and disable UPnP. Works like a charm! And yeah, the game is exactly as great as I thought it would be on iPad.)

Still, even on a 4.7 inch screen it really does feel like Guitar Hero (so long as you put headphones on–my poor little iPhone’s speakers just don’t rock hard enough). It had been a while since I’d last played one of these types of games (The Beatles: Rock Band was the last one I owned), but it all came rushing back as soon as those little notes started scooting down the highway on screen. Except that–somewhat surprisingly–they completely overhauled the guitar mechanics, adding a sixth button and squishing them all down to two rows. It’s both simpler and more complicated at the same time, since there are now only three lanes to deal with on screen, but each lane can be played on the top “string" or bottom “string", or both. (And, it has to be noted, the game’s version of “top" and “bottom" are the opposite of how it would be on a real guitar, which threw me off a bit at first. But I can see why they did it, and it was probably smart.) 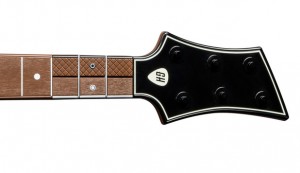 All of this means that you can play more complicated “chords" this time around, and it’ll probably take a bit to get used to. (Just remember: black guitar picks are up and white guitar picks are down.) Once you do get used to it, though, it’s a revelation. I was stunned at how much more like playing a real guitar it felt (particularly on higher difficulties), with the ability to play faux powerchords and shift them around the fretboard in roughly the same way as you would for the actual song playing. Of course, it’s massively dumbed down since you are approximating everything on six plastic buttons, but still. It made me wonder why they weren’t doing it like that from the very first Guitar Hero–it’s that good. Not only does it feel more realistic, but you’re much less prone to fumbly errors since you don’t have to wait until your fingers memorize exactly how far away each of the five colored buttons are like you would on the old guitars. It’s just two rows of three now. As I said: simpler, but more complicated. In a good way. 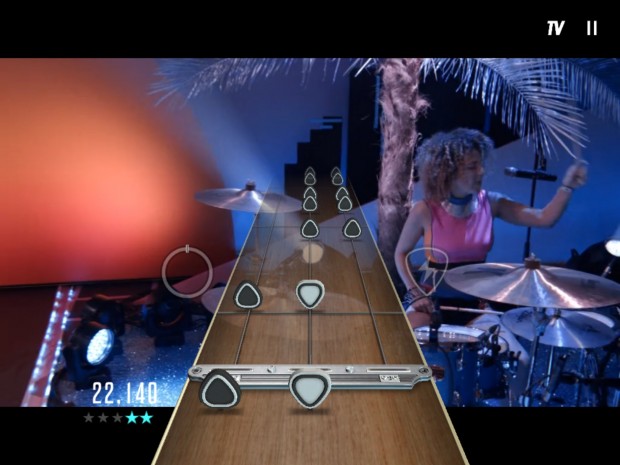 The actual game is simpler than I remember the old ones being, too. It’s split into just two modes: Live and TV. Live is basically a career mode, and it’s where you’ll unlock new songs to play. Story-wise, you are playing the part of a session guitarist who apparently plays in a ton of different cover bands, as each “level" sees you playing three or so popular songs of a specific genre with a specific fictional group. It’s actually kind of interesting how you can trace music trends through the Guitar Hero series, as this time there are a lot of the bass drum heavy “folk" groups that are all over the radio these days. It’s certainly not bad, though, and there’s a decent variety of stuff overall. (And even if you don’t like every song, they are still all pretty fun to play.) At the top of the screen there’s a video that plays from “your" perspective on stage, and it’s all done with real actors (who seem to actually know how to play the songs, usually). It’s another thing that I wish they’d been doing all along, as it’s a huge improvement over the cheesy CGI characters in past versions. 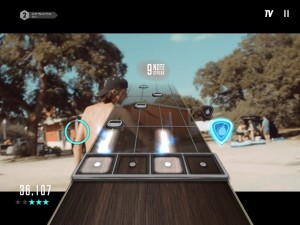 The other mode, TV, is a lot more interesting. There are basically two radio stations playing that you can choose from, which change genres every 30 or 60 minutes. All you do is pick one and you’ll immediately be thrown into a random song to play at whatever difficulty you want. From what I can tell, each station just streams a bunch of different Guitar Hero songs 24/7, and it’s the same for every person across every version of the game. Instead of the actors playing along on stage like in the Live mode, here you are treated to each song’s real music video playing while you hammer out notes. It’s actually a really fascinating idea, and works incredibly well. It means you’ll pretty much always have something new and different to play, and theoretically Activision can keep adding new songs to the stream without any updates required. 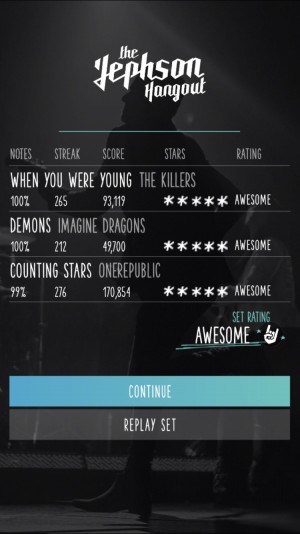 Unfortunately, as cool as the TV mode is, it’s also the only part of the experience that’s watered down from the console versions. On consoles, when you are playing along with the music videos you can actually see your ranking against the other people currently playing to the same song, and that’s missing here. Also, there’s a whole “token” system that involves leveling up and earning new skins for your note highway and being able to purchase individual songs from the stream to play whenever you want, which sounds awesome, but is also inexplicably absent. Womp, womp. Maybe in an update?

So, you’re probably wondering about that click-baity headline. How can Guitar Hero possibly be better on iOS than a console (especially with a few things missing from the TV mode)? Mobile is for babies! Casuals! Free-to-play ruiners of the gaming industry! Well, because you have a lot more options. You can play with a guitar or two if you want, but you can also play without anything, just using the touch screen itself (Tap Tap Revenge style). Every single song has a special touch screen version that has four lanes (instead of three), and it works remarkably well on the iPhone. It’s obvious that a lot of thought went into making sure those of us who don’t want to spring for a guitar can still have a cool experience (and for half the price!). In essence, this means you can play on your iPad or iPhone wherever you are, whether you’re on the couch, on the bus, or on the toilet–all with or without a $50 plastic guitar. (Can you play your fancy Xbox on the crapper? Hmmmm?) On top of that, you can also play on the new 4th generation Apple TV, which theoretically should give you the exact same experience as on a console, living room-wise. And you can apparently do all of those devices with a single copy of the game, and it’ll sync your progress across all of them. Boom.

Unfortunately, as I said earlier, there’s a pretty serious bug that originally prevented me from playing on anything but my iPhone (again, see fix here). Provided it gets an update soon, and provided my shiny new Apple TV arrives next week, I’m confident I may have the very best version of the game. (Or, the most flexible version, anyway.) Even until then, it’s still an insanely fun experience. I mean, this is it people. This is what we’ve wanted all along. Big, premium versions of the games that regularly come to more “serious" platforms while we get stuck with Flappy Whatever (not that there’s anything wrong with Flappy Whatever, of course). If you want more stuff like this to hit iOS, you should probably get this game. If you love Guitar Hero and Rock Band, you should probably get this game–especially since the new guitar mechanics feel leaps and bounds better than in the old games. You don’t even have to pay the full $99 bucks if you don’t want to (though admittedly it’s nowhere near as fun without a guitar). Heck, you don’t have to pay anything if you don’t want to, as the damn thing is free if you just want to try it out first. And you should, because it really is Guitar Hero on iOS, and that’s pretty awesome.