When about a month ago I decided to preview Soulspark – Battle Cards (Free), a new F2P real-time card battling game by Copenhagen Creators and Wizkids, I did so because I always look for games by designers who are trying to innovate or, at least, spice up genre conventions. I was very interested in the way SoulSpark‘s developers wanted to infuse card-battlers – which are usually defined by slow deliberation – with the element of timing and rapid decision-making. I was especially excited about the prospect of a multiplayer component in the game, which the developers have said they are working on for a future update. Now that I’ve spent more time with the game, I’m still loving the concept behind the game as well as the visuals, but there are some questionable, yet not game-breaking, design choices that detract from the experience as well as some hard paywalls that make SoulSpark more of a free-to-try rather than a free-to-play game.

Let’s start at the beginning, shall we? In SoulSpark, you lead a team of heroes (of the usual fantasy fare such as knights, rangers, and mages) which you equip with various cards – weapons, potions, spells, magic items – that you either buy from a store or earn along the way. The game’s equipment system is an interesting one: you start with a few cards, and each card has a Mana Cost and a Cast Time (the time in seconds between casting the card and seeing its effects). The wrinkle in the equipment system is that if you want the card to be a permanent part of your deck, you have to spend in-game gold to study it, otherwise it’s a perishable item that can only be used once. As you can imagine, this system “gently" pushes players to use their in-game gold to study the various cards, and while most of the cards are reasonably priced, the gold you get from winning battles isn’t that much. 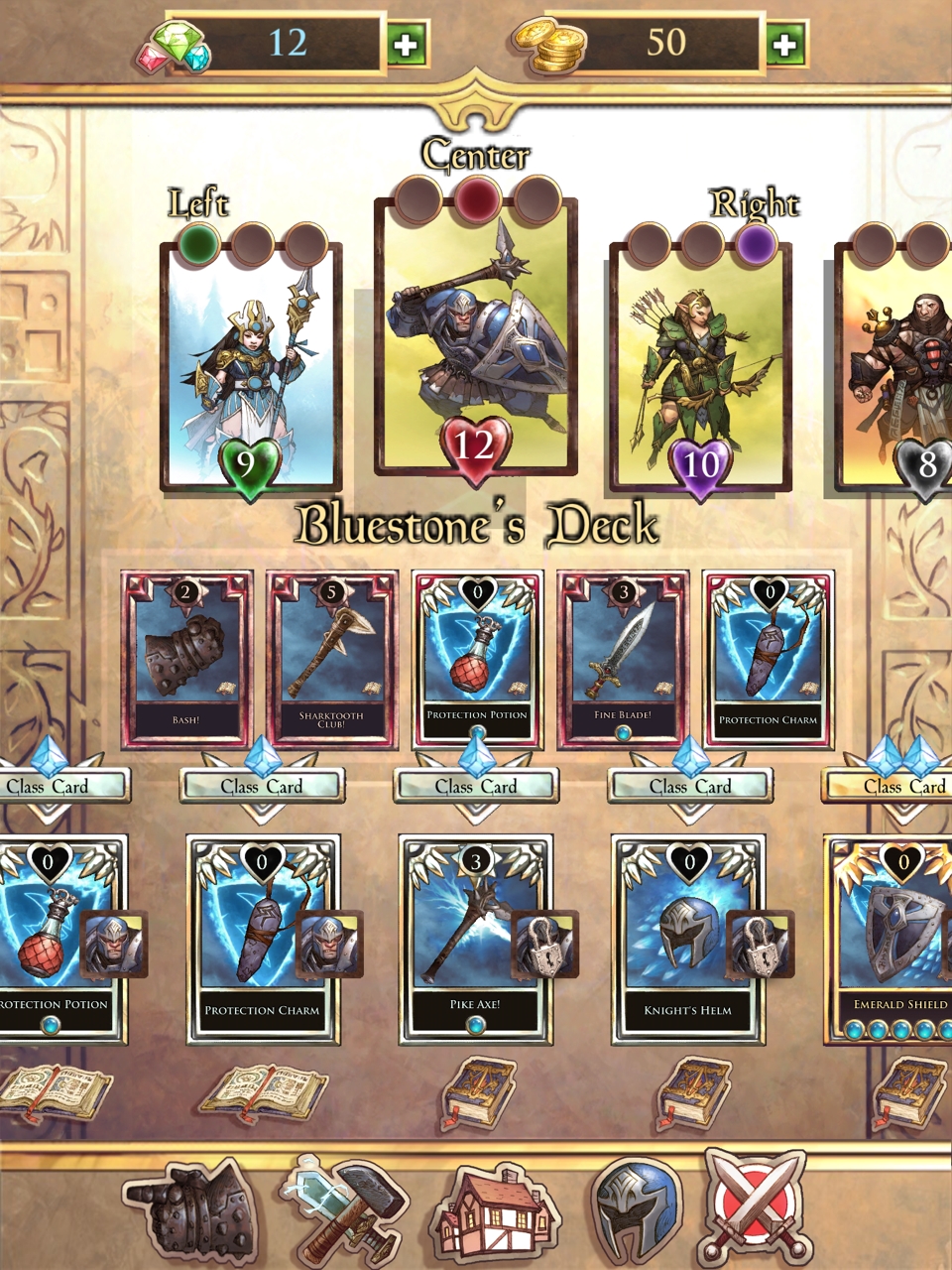 After you finish equipping your heroes, you get to move from battle to battle along a map. The map exploration and the occasional encounters with the various companions and monsters act as the game’s main storytelling device, a story that’s entertaining and occasionally humorous but, as to be expected from most fantasy games, not the most original. Once you encounter enemies on the map, you get to battle them, which is where you’ll find SoulSpark‘s biggest design departure from most other card games on the App Store because your heroes’ clashes with the waves of enemies are real time rather than turn-based. You have up to three cards in your hand, and you continuously discard the ones that are either not useful in the current situation or you lack the mana to cast.

Speaking of mana, SoulSpark‘s mana system is quite clever: you start with one mana “globe," and as time passes, the globes increase one at a time. However, when they appear, they are empty and useless. If you want to cast a card with let’s say 1 mana cost, such as a basic Heal spell, you have to discard a card that costs 1 mana. If you want to use a card that costs 2 mana, you have to discard two 1-mana cards or one 2-mana card, and so on. SoulSpark‘s mana system, then, forces players to make some interesting tactical decisions regarding when to discard a card, when to keep it, and when to play it. 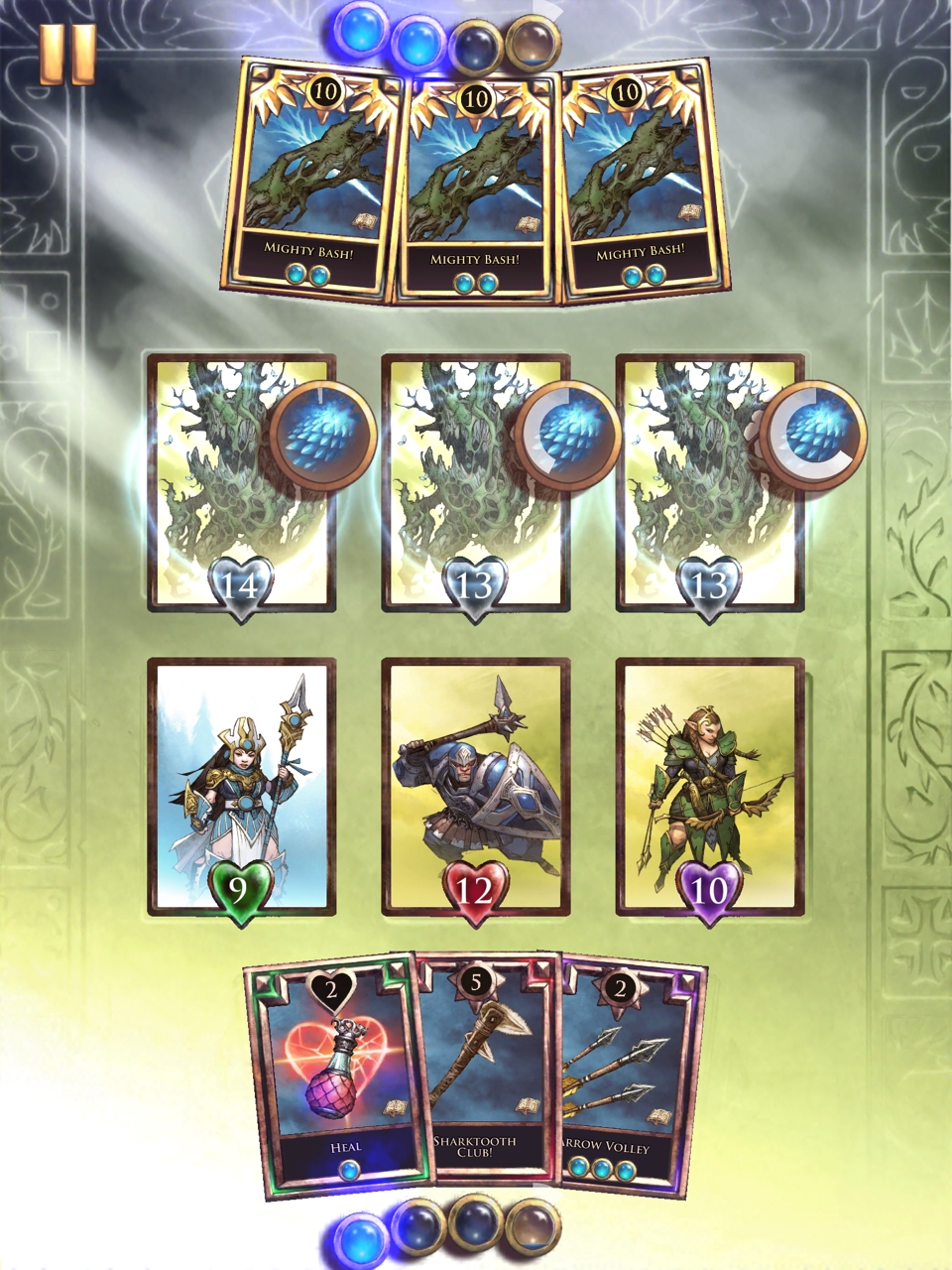 When you have enough mana available, or you just want to play a zero-cost card, you drag the card to its intended enemy, and when the card’s cast time is over, the card action is executed (an attack, a heal, a spell, etc). You have to time your attacks well otherwise your fifteen-second wait for your knight to attack with his huge sword might have no effect because you didn’t consider the seventeen-second armor spell the enemy had cast before you attacked him. While in general the real-time system works great, I found that timing actions during battle wasn’t always easy because the cast time indicator doesn’t stand out as much as it should (it’s a little white circle in the center of the Hero portrait). I guess the more you play the game, the more you’ll be able to time the various cards, but a clearer visual aid in addition – or instead of – the white circle would have been of great help.

The game increases in complexity as buffs and debuffs are introduced that, because of the game’s real-time nature, can render an enemy untouchable for a number of seconds, especially in the early fights. These protection or curse cards often dominate the battle, and there are some great ideas here that marry theme and mechanics well, like enemies who can hide for a few seconds or a resurrection spell that can bring an enemy back to battle. However, I felt that the enemies used these buffs and tricks way too often, which resulted in long staring contests with my screen while I would wait for buffs to fizzle out so I could attack again. As an idea, these buffing and debuffing cards work great, but in practice I felt that they broke the game’s rhythm a bit and made the battles drag. 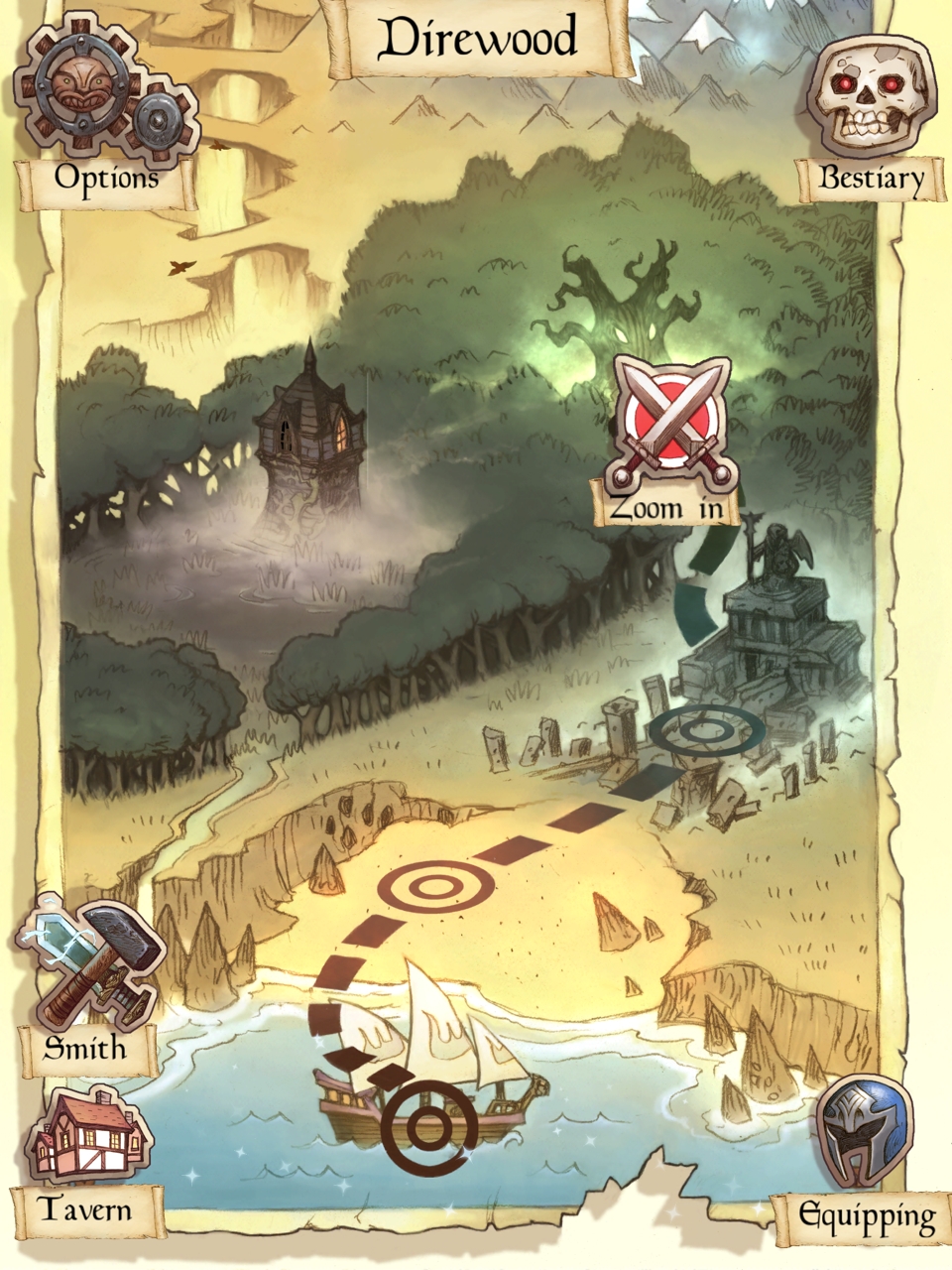 My issue with the cast time indicator aside, the developers did an overall great job at creating a UI that’s clear and cohesive. I do wish they had used the iPad screen’s space differently though by making the game play in landscape rather than portrait mode so the cards would be at each side of the heroes and enemies rather than above and below. The reason is that on my iPad, I had to make an effort to look at my opponent’s cards because they are all the way to the top of the screen while everything else takes place on the bottom half of the screen. This spatial arrangement might work great on the iPhone, because the screen’s smaller size allows players to take in everything in one gaze, but it doesn’t work as well on the iPad’s larger screen.

Despite my relatively-small issues with the UI and with the orientation choice, I foundSoulSpark‘s overall art design lovely, with Steve Prescott’s hand-drawn art really helping the game stand out. The characters don’t feel like generic fantasy cutouts (even if their classes are), and in general the art design is lovely full of vibrant colors and terrific animations. Same goes for the music and sound effects, which create a vivid atmosphere without becoming overbearing. For those who enjoy game art, Copenhagen Creators is running a competition for TouchArcade visitors with the prize being an original piece of SoulSpark artwork signed by Steve Prescott, who’s a very well-known artist in the world of fantasy and of Magic the Gathering. 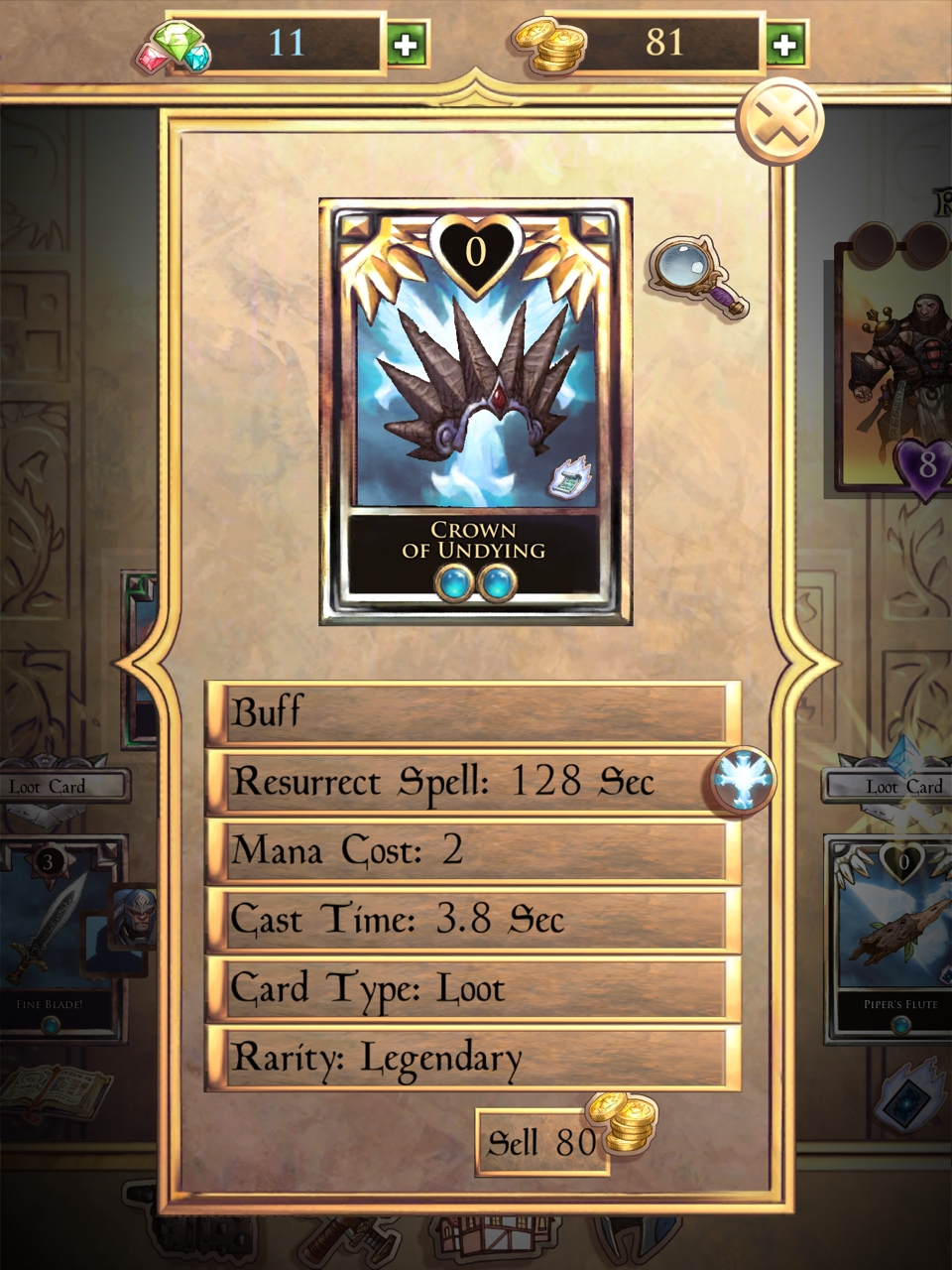 Now, this being a F2P game, I’m sure many are wondering how the game’s monetization works, and my answer to that is that you should treat SoulSpark as a free-to-try game rather than a F2P because you’ll hit some paywalls quite early and quite hard. There is, of course, an energy system, which would be fine except you don’t have enough heroes at the start of the game to be able to continue playing while the “tired" ones are resting (keep in mind that the game doesn’t make the tired heroes unavailable but, rather, they fight with less initial health). The other issue is that about ten battles in, you’ll start fighting enemies that can literally one-hit your heroes (they hit for ten damage and your starting heroes have twelve, nine, and eight health), so your heroes will die in battle, a lot, unless you are amazing at using your protection spells and buffs. You can, of course, use one gem mid-battle to resurrect your dead heroes every time they die, and there are always other heroes with higher HP that you can buy for about a dollar.

Bear in mind that I’m not criticizing SoulSpark‘s monetization system. I’m fine with F2P games and many of the card games I play are F2P (Hearthstone and Solforge being two of them), but there are F2P games that you can play for free as long as you are willing to wait and grind a lot (like World of Tanks Blitz), and then there are games like SoulSpark that will use pay walls to keep you from devouring the content in one sitting. At the same time, gaming’s a business and developers need to make money from their games (and most premium games from companies not called Firaxis or without long pedigrees don’t make much money). SoulSpark is a very entertaining game, so download it, try it, and if you are enjoying it, which I believe you will, buy some gems so you can get the most out of it.