If there’s one thing that Forgotten Memories: Alternate Realities ($4.99) should be remembered for, it’s the way that developers Psychoz Interactive have listened to players’ feedback and quickly fine-tuned their game. After six years in development, the game we were presented with was a masterfully atmospheric but tiresomely difficult and repetitive horror game. But after just one week of hurried tweaking and re-balancing, most complaints were addressed to some degree, producing a game that is extraordinarily good but still agonisingly flawed.

Alternate Realities is the first in a series of survival horror games coming from Canadian developer Psychoz Interactive. It is heavily inspired by classic creepfests Silent Hill, Resident Evil and Alone In The Dark, and takes the player in to the archetype fearful setting of an abandoned psychiatric hospital. Taking on the role of investigator Rose Hawkins, you’re searching for a missing girl, and your search has led you in mysterious circumstances to the old asylum. You set about exploring the dilapidated building, in pitch darkness but for your flashlight, and from the outset the game wages psychological warfare against you with the pervasive threat of the unknown around every corner. 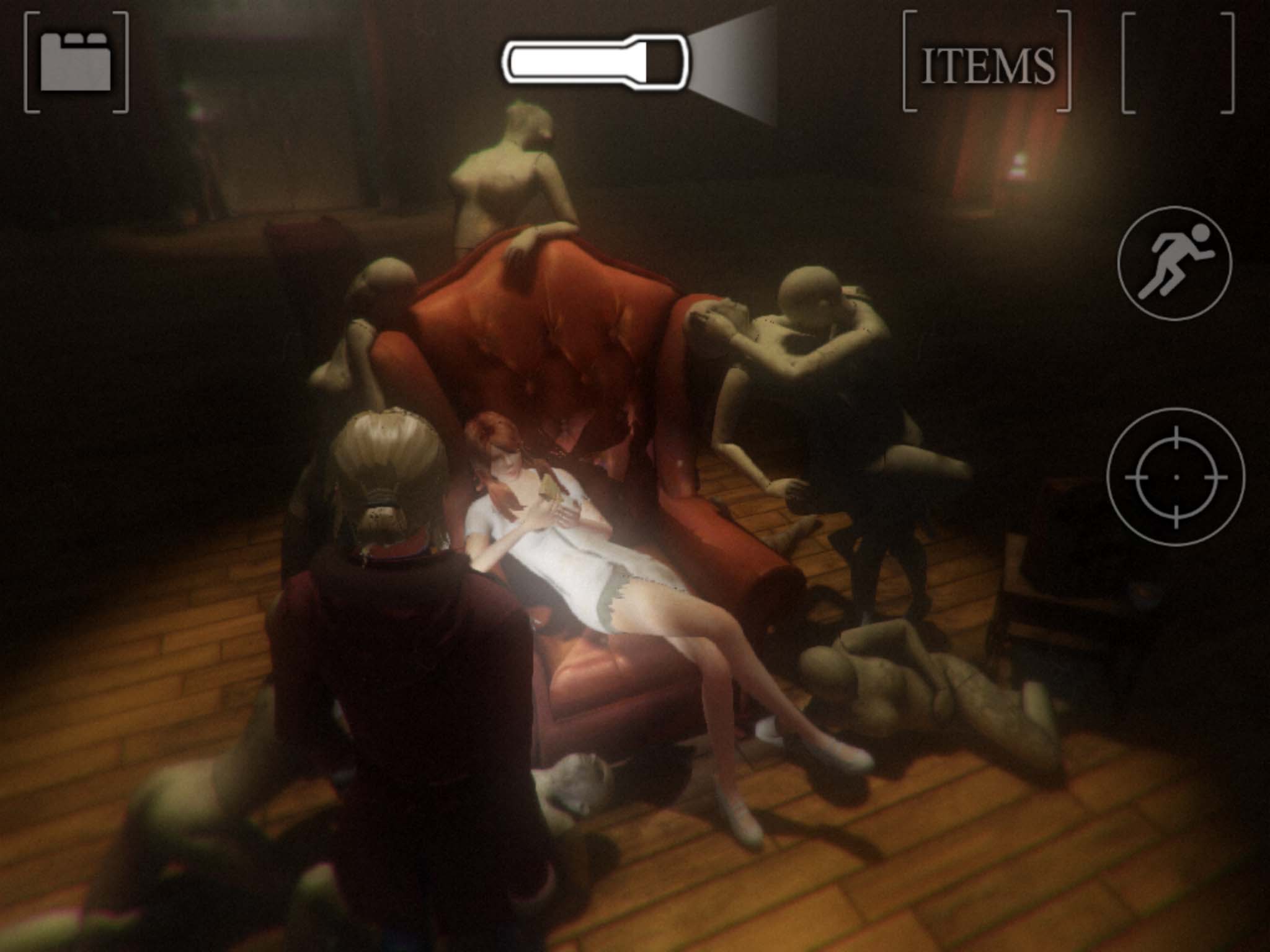 Things start to get uncomfortable as you find mannequins posed — or perhaps waiting — around the hospital corridors, creating a sense that you’re not alone. Is one of them about to attack? Did that one in the distance just turn to look at you? I don’t think that one was there a moment ago… The mix of lifeless intimidation, and sometimes outright sexuality in the mannequins’ poses, puts you on edge, and reminds you that each cautious step you take in to the guts of the asylum is one more desperate step you’d have to run to get the hell out of there if it turns nasty.

As you explore, you’ll discover written notes and audio recordings that give some insight in to the sinister experiments that took place at the asylum, the results of which may still be lingering to this day. I’m one of those players who usually skips that sort of thing because I want to get on with the game and continue exploring, but with Alternate Realities I’ve listened to every recording and read every note, document and case file, some of them more than once. They feel entirely authentic and add so much to the atmosphere of the game, sometimes raising questions, sometimes answering them.

Alternate Realities features some of the best graphics ever seen on a mobile platform, with richly detailed environments that feel solid and real. There are a lot of buzz words to throw around here: the game uses Apple’s high-end Metal graphics, high dynamic range rendering, dynamic lighting and shadows, and multiple post-processing effects. In fact, that “on a mobile platform" qualifier is quite redundant — the quality here stands up well against consoles and desktops. The sense of place is further enhanced by your viewing it through the narrow beam of your torch, with sparse, reverberating sound effects fleshing out the dusty air. There is some superb voice acting, injecting an air of credibility to dialogue that a more cynical person might describe as cheesy. Among the vocal talents are Guy Cihi and David Schaufele from Silent Hill 2.

Controls use the tried-and-trusted formula of thumbing the left of the screen to move and the right to look around. There are two virtual buttons to toggle between running and walking, and to activate aiming mode for combat. When in combat, you tap the screen to swing or fire your weapon, so it’s really just a case of pointing in the right direction and tapping when your enemy’s within range. Melee combat can be quite satisfying in the sense that it feels violent and impactful, but after a while it does become repetitive because all you’re doing is waiting for the enemy to approach and then tapping to knock them back, and repeating that maybe a dozen times. It gets old. 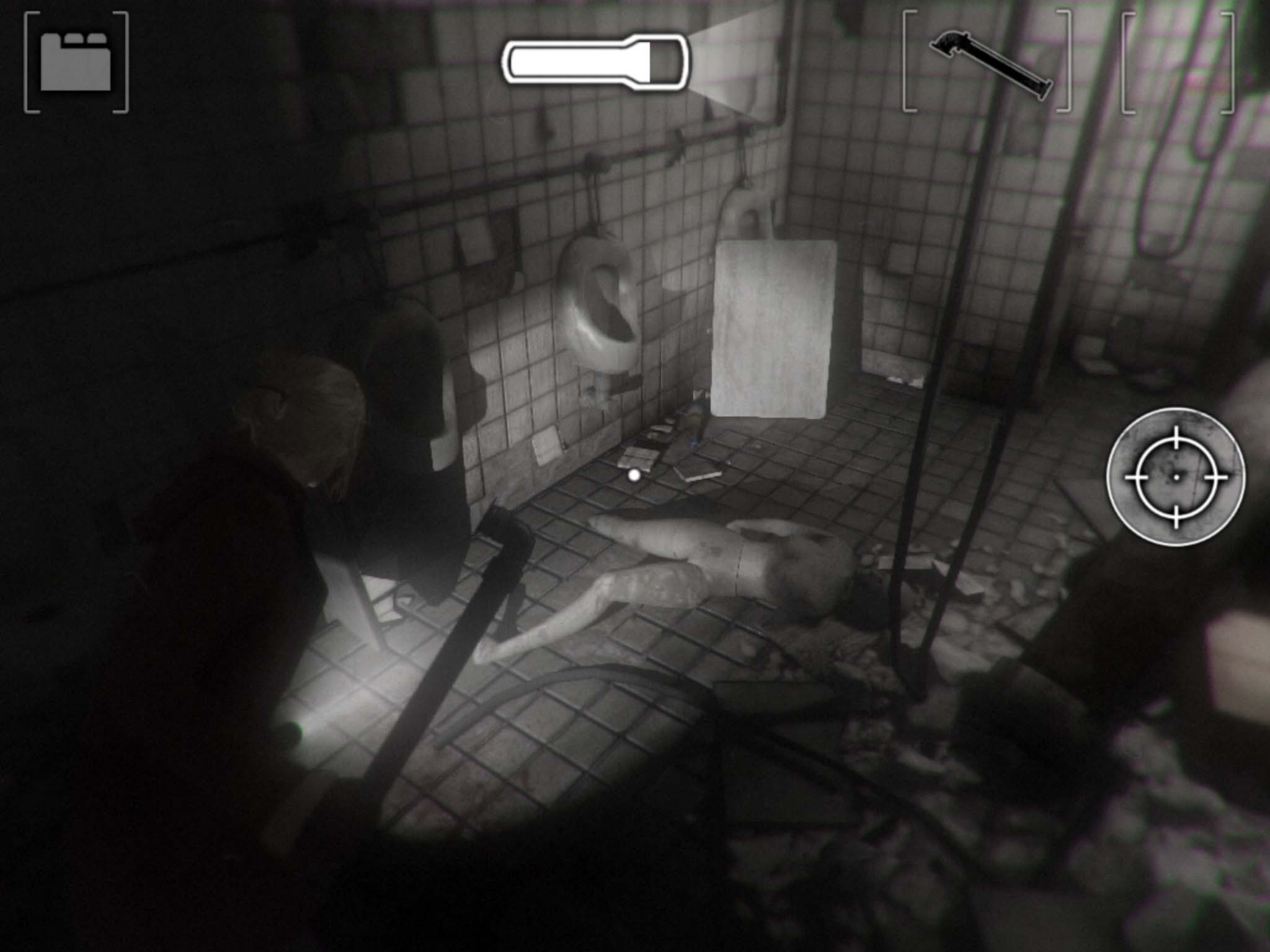 One of the major problems with the initial release of Alternate Realities was that your flashlight only lasted for so long between recharging stations. You can see why Psychoz thought this was a good idea, but in practice it was a real passion killer. Instead of exploring the asylum, hunting around, soaking up the atmosphere, you had to rush around, always feeling pressured by the need to recharge your torch before you were plunged in to darkness and had to reload the last checkpoint. It became a game about recharging a torch, with everything else taking a back seat. The game’s latest patch added an “easy" mode which gives the torch unlimited power, and I can’t really imagine anyone wanting to play on the normal mode now. Disappointingly for anyone who was already part way through the game, there was no way to switch from normal to easy mode without restarting from the beginning.

The other problem was the infrequent checkpoints. You save your progress at computer terminals found in offices around the asylum, but you need to find floppy discs to enable the feature and the game only allows one save per disc. That’s how the normal difficulty mode still works, but easy mode now allows infinite saves. Still, even in easy mode, the scarcity of computer terminals means that you’ll often go through long periods of play without saving, and if you die then you’ll have a lot to repeat. What at first is fun — exploring new rooms and finding their secrets, fending off surprise attacks — quickly becomes very tiresome when you have to go back through it all again and again. 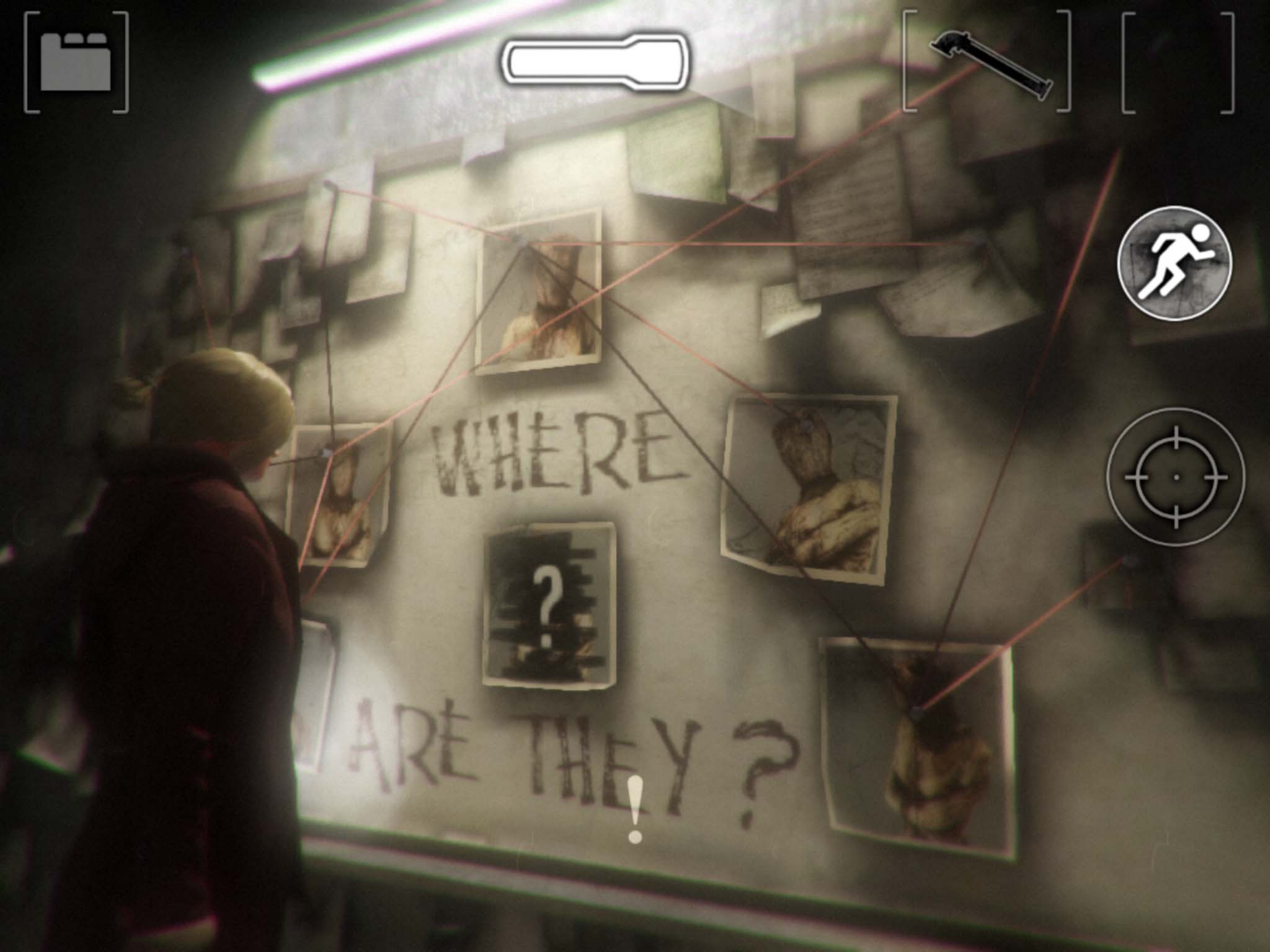 There are still some issues that haven’t been patched.

Swiping the left of the screen to look around is very unresponsive, even with the sensitivity on maximum. It’s not a huge problem while you’re just wandering around, but in combat it can be a real hinderance if you’re fighting multiple enemies. On one occasion, when going upstairs, at the top of each flight I had to swipe from right to left on my iPad a full four times just to turn ninety degrees.

When you approach objects to pick them up or examine them, you have to get so close that the object falls within the clipping plane of your torch and it doesn’t get lit at all. Every single time you go to inspect something, you end up inspecting a completely black object. It’s distracting. I don’t know how this survived beta testing and a major patch.

Alternate Realities is a game of contradictions. It’s a superbly polished experience, yet is riddled with spelling mistakes. It’s tense and exciting, but it can also be very dull as you re-tread old ground over and over again. The difficulty level was set just right to give you a decent challenge, but to get rid of the fun-zapping torch/checkpoint issues you have to play in easy mode which makes the enemies weaker and gives you more health and ammo, so will probably be too easy for some players. 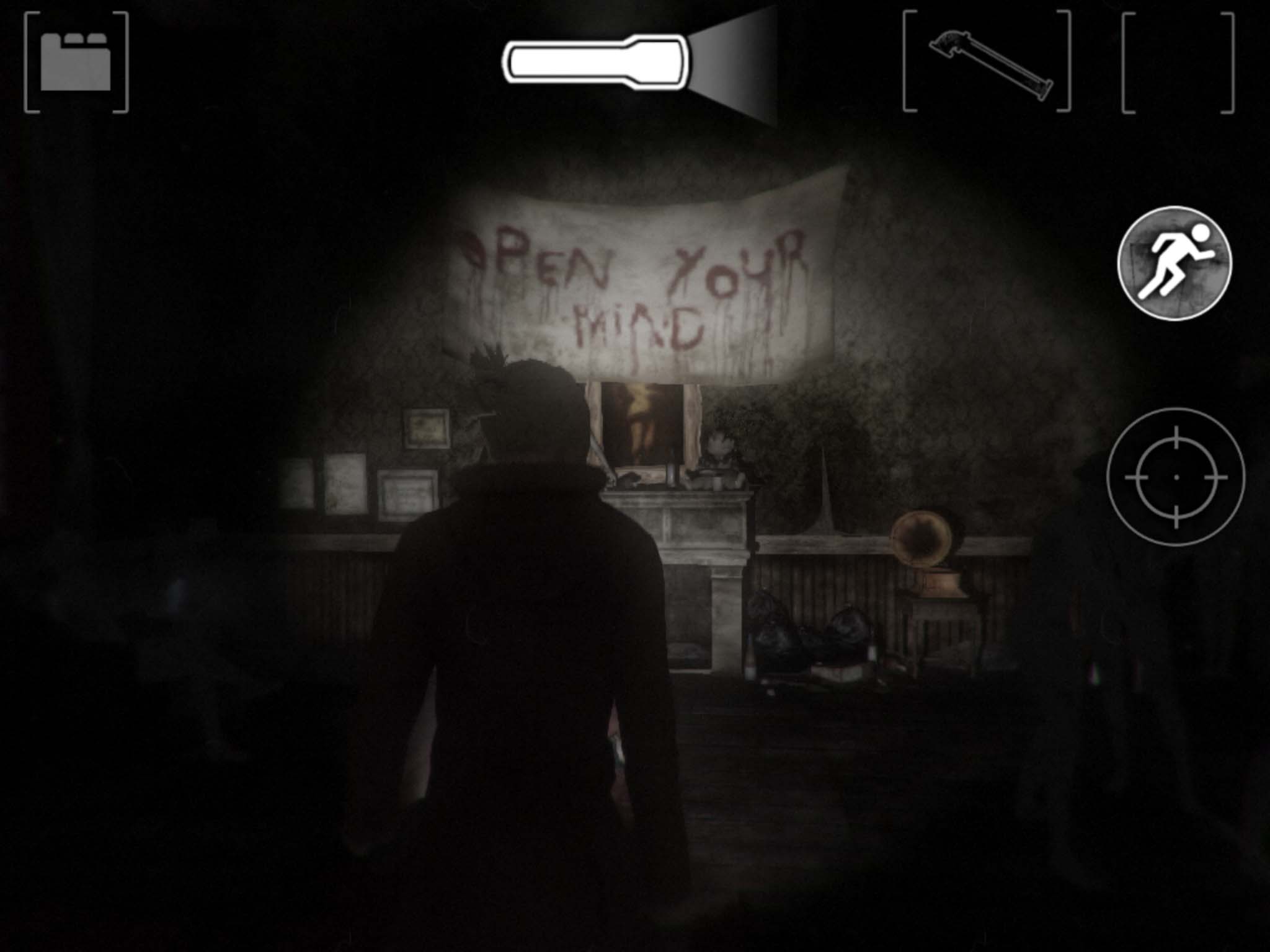 We must give a nod of respect to Psychoz for being so willing to listen to their audience and make vital changes to their game. The experience on offer now is greatly improved over the original release version, even with a few holdout flaws. Infrequency of checkpoints still hurts the game as it leads to multiple play-throughs of areas that are only fun the first time.

When a game is truly great, you only stop playing it when you have to get on with something else or it’s time to go to bed, and even as you switch it off you’re looking forward to playing it again. Every time I’ve stopped playing Forgotten Memories it has been because I’ve died and couldn’t be bothered going through the last twenty minutes of slow, plodding gameplay again. That speed of gameplay in a horror setting is perfect the first time, but on the second, third… sixth forced replay it’s not much fun at all.

We take a lot of factors in to account when deciding on the overall rating for a game. For everything that Alternate Realities gets right, the scarcity of checkpoints and a bouquet of other small annoyances knocks it down from being a 5-star masterpiece to a 3.5-star could-have-been. Don’t go away from this review thinking that this is by any means a bad game, but it’s impossible to give an unqualified recommendation for a game that a lot of people are going to find boring.