If you are looking for another insanely hard challenge that will spur you to throw your phone out the window in frustration then I’ve got the perfect game for you. Bouncy Bits (Free); is a disturbingly demanding game, clearly inspired by Flappy Bird, Mr Jump and Crossy Road, which feels like Flappy Bird and Minecraft gave birth to a monster, an evil monster that will haunt your dreams.

These super frustrating games are all the rage these days, it seems that the harder you make the controls and the more impossible you make the game play, the more hooked the users get. This one is worthy of a mention, it’s really well done. The characters are cute, the game play seems simple but the task is impossible; all the right ingredients for a chart topping title. 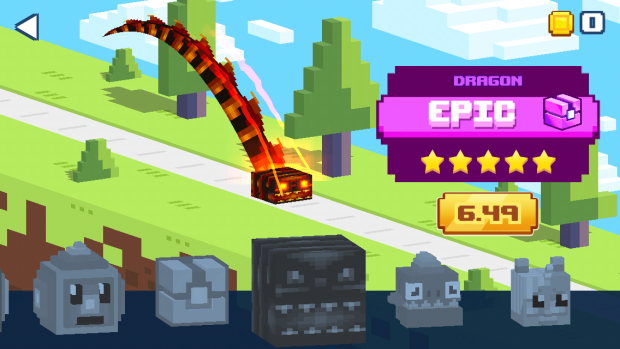 The game was created by Australian developers Playside, the guys behind the Spongebob – Sponge on the Run ($3.99) game.  They built Bouncy Bits in 2 months with a team of 20, and a lot of that time went into creating 70+ characters, and a wide array of environments. These serve to keep the game amusing and provide some goals and rewards to reach. The game is almost worth downloading just for the huge array of characters you can click through, most of which can be unlocked through dedicated amounts of game play or with bundled character IAP’s. You can feel the devotion to refinement in these characters, there are some assuredly random and interesting ones in there too, including an awesome dragon and a heap of cats; some with rainbows, and all with awesome catch phrases. There are also some really niche market characters like the Legion character from Red Dwarf, Elvis and an impressive Scottish Lumberjack. 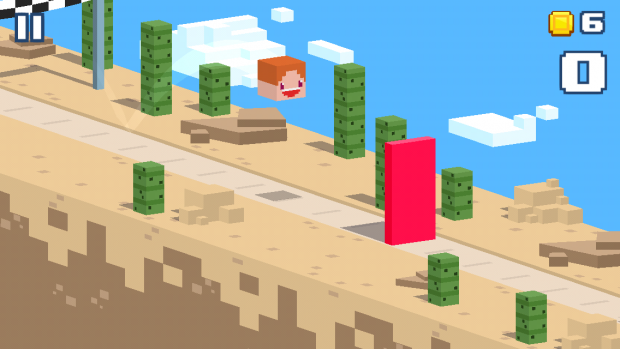 You move down the screen on a 30 degree angle, in a cube like 3D environment, which kind of feels like the old arcade game Paperboy. Your bit bounces in regular sized jumps and you drop it quicker by tapping the screen. The trick comes from getting the timing right, and also from judging where your bit needs to hit to clear the next obstacle. What sets this game apart from others in this flooded genre is the way the developers have injected varied content to an otherwise soul-destroying game. Every run through is different. When you die, and this happens every few seconds, you drop into one of 5 different level settings, which all have very unique moods. The game obstacles are also randomized, so unlike the game Mr Jump, you’ll need to learn how to tackle each object individually, rather than build up a memory of what’s coming up next. The game is crazy hard as a result, and I have to take my hat off to anyone who can get any deeper than 20 or so objects in. Game Center’s leader board emphasizes just how hard it is; currently only 12 people have made it to 100+ objects in a single run, and these guys must be wizard-like freaks with Rainman-like mental abilities.

I don’t know if it is intended or not but the controls are terrible. Much like Flappy Bird, clicking the screen is not always responsive, or at least it feels unresponsive. Perhaps I’m just unspeakably atrocious at this game. The bits only drop when you hit on a new bounce, and then not again until the next bounce. So while clicking,  you can feel like you’ve already clicked for a second bounce that doesn’t follow through. I watched my kids really struggle to pick up how to play on their own, so I’d suggest some sort of simple tutorial at the start to get people trained up.

There are a few simple tricks that will make game play a bit less demoralizing. Clicking like a madman will keep the bit low, which helps you get under objects, also good to help you time when to release the bit to a full jump. Figuring out where to start a bounce from is the hardest part, your bit needs to star. Another strategy to try is to drop just before each object, this doesn’t always work, but if you have the fortune to get a good run of low objects it will give you a good chance to regain some kudos. The other strategy I found successful is to play so much and for so long that you don’t care anymore, and through shear luck you’ll make it past 20 or 30 objects in a dream run. 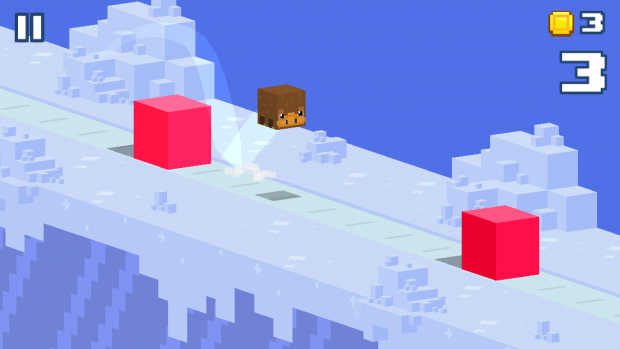 So what’s next for Bouncy Bits? The next update will include a whole bunch of new characters to unlock without the need for any coins at all. They will also be adding a challenge mode allowing players to play through a map of pre-made linear levels. Each level that is completed will win the player a new character; only available by playing the challenge mode. The update will have a host of other features, such as making it easier to get coins, and also making the controls easier for first time players.

Bouncy Bits has made a big impression on me. I got so caught up in the game I had nightmares that square dogs and cats were chasing me, all making those cute little game noises.  It looks like has featured the game, which means that it should get in front of plenty of potential new victims. My advice is to play in a padded room, or to get a wrist strap for you phone, because this one is going to do your head in, get you throwing your device at the wall and keep you coming back for more.