I had expected to hear my geriatric iPhone 3GS to croon its swan song when I loaded up Minecraft: Pocket Edition [$6.99] for the first time. It didn’t. To my surprise, Mojang’s inaugural iOS title actually got along swimmingly with my hardware. Was it a sign of good things to come? Perhaps. Deeply pleased with this turn of events, I went ahead and generated my first world.

And that’s when the disappointments started rolling through the door. To be fair, I don’t blame Mojang. If anything, they’ve done a rather masterful job at porting their world-famous IP onto the platform. Nonetheless, there’s only so much you can do around technical constraints. Regardless of how you slice, the truth of the matter is that Minecraft just doesn’t work here (not yet, anyway). To paraphrase the Genie from Disney’s Aladdin, phenomenal cosmic power and itty-bitty living spaces do not mix. 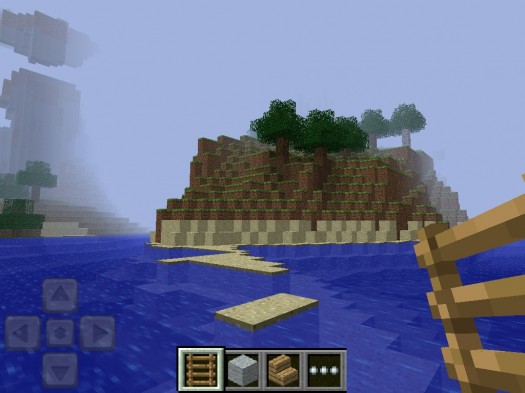 Minecraft‘s familiar sense of scale is all but missing in Minecraft – Pocket Edition. Everything is forever frozen in a state of unnatural daylight. There is no day and night, no sunsets to behold, nothing to reinforce the feeling that we’re in a world of our own. Instead, what we have is something that feels more akin to an open-air museum, a place to exhibit your mastery of multi-colored blocks. But even then, it’s hard to be deeply impressed with a Big Daddy replica that someone has built when you find yourself running about in circles, struggling to take in every detail. Again, this has nothing to do with Mojang; small screens are small. You might as well complain that winter is cold.

Once you’ve grown acclimatized to the controls (it’s your standard D-pad sort of thing), building is relatively easy. Blocks are placed by tapping the screen and removed by holding a finger over the cube. It’s about as simple as it gets. Granted, you’ll probably find yourself doing a lot of the latter. It could just be my lack of finesse but I found it a bit of a challenge to get the blocks exactly where I wanted them to go.

Asides from that, there’s not much else to Minecraft: Pocket Edition. Building is everything. The game gives you an unlimited supply of blocks (there are about thirty or so to choose from) to play with. It also features cross-platform multiplayer. Don’t get too excited. You won’t be able to interface with your home server. For the time being, you’ll only be able to sojourn to worlds built on the iOS and the Android.

Seriously, though. I could just be spoiled. I want my creepers. I want my skeletons. I want the ability to craft items. I want to be able to mine, damn it. Minecraft: Pocket Edition doesn’t feel like Minecraft. It feels like something else entirely, something that may well be the point. And, for one reason or another, that just doesn’t sit too well with me.

But if you’re willing to take it for what it is and want nothing more than the ability to engineer pixelated utopias while you’re on the go, Minecraft: Pocket Edition isn’t exactly a lost cause. The developers appear to have a number of updates lined up. Minecraft: Pocket Edition could potentially be an awesome thing someday. Until that day comes, though, it is best purchased by the curious, the affluent and the hardcore fan.