As I mentioned back when I reviewed Monument Valley ($3.99), it was bound to be a love it or hate it affair, and I was actually pleasantly surprised to see that most people felt as strongly about the experience as I did. It’s a beautiful thing to play with, an artfully-constructed world that you can manipulate and bend around in ways that only a few other games have allowed. It was a gorgeous, pure experience, free of the flashing lights and urging pace that seems to be the general speed of things in this wonderful hobby of ours. It was also very short, with a mere ten levels to its tale, about a third of which were basically tutorial stages. By the time it turned up the gas even a little bit, it was soon finished. As an experience, it’s hard to argue with it. As a mechanical game, it was a whole lot of potential with a somewhat wanting level of realizing it. Generally, it was very well-received, with most people left crying for more. So developer Ustwo got working on some more, and after several months of development, they’ve released an expansion for Monument Valley called Forgotten Shores. 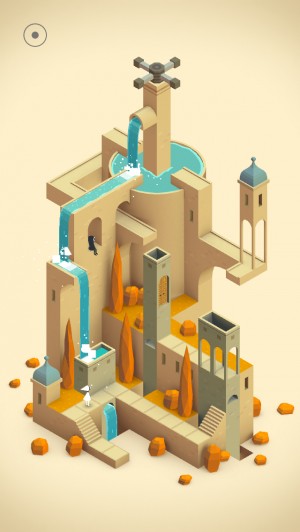 As I see it, there were a few boxes to check off with this expansion. First and foremost, simply delivering more content was important for those who were still thirsty for more after the original set of stages. Second, it was important to deliver an experience at the same level of quality as the original game. Finally, seizing some of that gameplay potential ought to have been a priority. In my opinion, Forgotten Shores checks off that entire list. For the price of $1.99, half the cost of the base game, you get eight new stages, and unlike the original, none of these are spent on overtly teaching you how to play. As a result, this expansion ends up being longer than the base game even with a smaller count of stages. If you finished Monument Valley and wanted more, you’ll be all set here.

The stages are crafted just as carefully as those found in the original. I found the second-last stage of the new set to be particularly intriguing in how it unravels, and I really appreciated how well the gameplay came off in the final stage. It goes without saying that they’re visually beautiful in their construction, but there’s also a certain elegance to how they’re mechanically put together. There are several new twists to the gameplay this time around, though the game still essentially hinges around manipulating perspective. Generally speaking, each stage has more sections than we saw in the original set, and it’s always a pleasure to see just how things are connected. I also really enjoyed the way one of the stages played with audio, layering on bits as you progressed.

I still think there’s a ways to go in terms of exploring the mechanics the game uses, but Forgotten Shores definitely progresses things significantly. The return of one of the memorable “characters" from the main game makes for a few reasonably complex stages, while one of the later stages goes neck-deep into Escher-town to the point that I was actually rotating my device to keep my bearings. The game also features puzzles that involve playing with water levels and flows, and situations where you have to make use of the crows in slightly more complicated ways than before. Several of the game’s puzzles felt like something you would see early- to mid-game in a modern Legend of Zelda game, which represents a clear step forward from the relatively simple puzzles of the base game. Don’t get me wrong, there’s still no way to die and I’d say it’s pretty near impossible to get stuck anywhere, but in terms of mechanics, these new stages are certainly pushing things forward.

Of course, we’re used to getting updates and expansions free on the App Store, so you’re probably wondering whether or not it’s worth paying an additional fee to extend what was a fairly short game. My answer to that depends on what you took away from the original Monument Valley. If, like me, you felt the experience of the game was well-worth the asking price of $3.99, then Forgotten Shores is a great deal. You get what amounts to an entire new game for half the price. If you thought Monument Valley was too short, too simple, and you weren’t satisfied at all with it, then Forgotten Shores isn’t likely to change your mind. If, however, you came away from Monument Valley mostly satisfied, but wished there was just a bit more meat on the bone in terms of length and mechanics, you’ll find this expansion goes a good way towards scratching any lingering itches. I’m personally very happy with this extra set of levels, though I still see a lot of possibilities waiting to be explored should Ustwo decide to follow up Monument Valley with a stand-alone sequel in the future.