In my time playing video games, I’ve noticed that games tend to break down into two different types, broadly speaking. There are games that lean more on giving you interesting play mechanics and challenging you to master them in order to overcome some sort of challenge, and there are games that lean more on the side of giving you an experience. You get rare cases where the line is straddled fairly evenly, but for the most part, games are going to do one of those things very well and give less attention to the other. Both types have their fans, and many gamers love both, but when a game comes along that strongly favors one type and does it well, you often see confusion from the opposite camp. I say this because even though I expect it to get a lot of well-deserved praise, a lot of people aren’t going to like Monument Valley ($3.99) very much. Like last month’s Tengami ($4.99), it is intensely focused on delivering an experience, and it does so spectacularly well. Its specific game mechanics have been done already, and done better to boot. The mechanics guys and the experience guys are going to have knife fight over this one.

In Monument Valley, you play as the silent princess. You have to navigate through ten levels, with your main means of interaction being the ability to rotate the perspective or turn certain parts of the stage around. Though things appear to be three-dimensional, you cannot trust your eyes. If a piece is connecting to another piece, even if it seems like it should be impossible in 3D terms, the pieces are considered connected. If you’ve ever played Echochrome or Fez, you’ll know what to expect here. The game consists entirely of these traversal puzzles, but as none of them are terribly challenging, they seem to serve more as something to do with your hands while you enjoy the sights, sounds, and story. 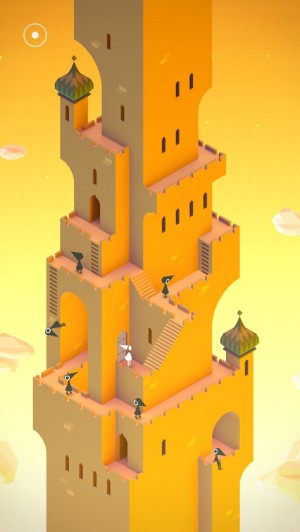 There’s quite a lot to enjoy in that regard. Monument Valley is almost impossibly gorgeous. No one stage looks like any other stage, and even within the stages themselves, the look and feeling of the paths you walk can change very quickly. Every screenshot looks like a little work of art, and seeing how pieces of the levels move is a treat all on its own. One of the later stages in the game works something like a music box, and the way it all unfolds and moves as you push things around is sublime. Not to be outdone, the sound design in this game is also outstanding. There’s a bit of music here and there, largely short pieces in dramatic moments, but the game generally relies on excellent use of environmental sounds to keep your ears interested. This game is definitely worth putting on the headphones for.

The story itself is sort of subdued. You get little snippets here occasionally by text, and the title cards for each stage tell a lot, but much of it must be pieced together by carefully observing and thinking about the symbolism of things playing out in front of you. We’re never really told exactly what’s going on, and although the ending can kind of serve as closure, if you’re like me, you’ll probably be sitting there afterwards still trying to puzzle out exactly what the developer was trying to express. As soon as the credits finished, I wanted to start again from the beginning and try to pick up new information by playing through once more. It’s that kind of game.

Facilitating this, like many games focusing on delivering an experience, Monument Valley is quite brief. I can’t even begin to imagine anyone getting stuck on any of the game’s puzzles, so you’re probably looking at a runtime along the same lines as mine, which clocked in at about an hour and change. It doesn’t seem like nearly enough time for the mechanics to reach their full potential, but for conveying a story, it’s just about right. It doesn’t need any longer to get across the feeling it seems to be trying to send out, so bloating it out for the sake of a longer running time probably would have only hurt it on the whole. Replay value is limited to your own desire to experience the story again, since there aren’t any achievements or extra content to pursue.

To fans of experience-focused games, and you know who you are, you should assuredly pick up Monument Valley right this minute. It’s a feast for your senses, is mysterious and vague enough to keep you thinking, and has a great, snappy pace to it without ever feeling rushed. On the other hand, to the people who dislike this type of game, and I’m very sure you also know who you are, this is not going to please you terribly much. The gameplay, while clever, likely isn’t anything you haven’t already seen, the game itself is very short, and there’s little on the bone to chew on, mechanics-wise. As for me, I feel that my four dollar ticket to the strange and captivating destination of Monument Valley was more than worth it. If you decide to take the trip, too, don’t forget to stop by the thread on our forums to read more impressions and leave your own.