The problem with knocking the ball out of the park the first time you’re up at bat is that every time you approach the plate, fans expect you to do the same. Luca Redwood’s 10000000 ($2.99) was an iOS gaming grand slam. As mentioned in our review, the game ticked off every checkbox that makes a game impossible to put down, and since then has only gotten better with updates. 10000000 is among the games that I install first when I get a new device, and is in the same folder of iOS games that if I needed space on my device I’d sooner delete family photos than anything from it.

The followup to 10000000 was supposed to be the previously announced You Must Build a Boat which looked to build on 10000000 with some additional depth. I would’ve been fine with that, as would most 10000000 fans I imagine. Then Luca, or “10000000 guy" as he’s come to be known released the following teaser trailer for something else entirely:

The simplest way to describe Smarter Than You (Free) is a Game Center-enabled game of rock paper scissors (or roshambo depending on what you grew up calling it). You can play it like this too, randomly matching yourself with opponents then similarly randomly mashing one of your three moves. However, simply writing it off as asynchronous rock paper scissors would be doing both yourself and the game a massive disservice, as Smarter Than You is an incredible mind game if you’re willing to let it be one. 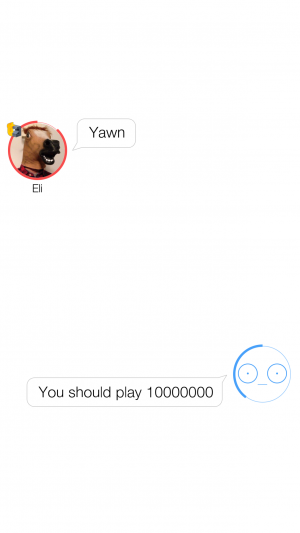 The game has three core moves: Arrow, attack, and counter. Counter dodges an attack, but you’ll take damage if you dodge and your opponent selects arrow. Similarly, selecting attack will best your opponent’s arrow fire. At the start of each turn, these movements are assigned a random point value which then fluctuate based on dialog options chosen by the attacker… Which is where the game gets interesting.

On the defending side of the turn, the information you have to go off of is limited to what they’ve told you and the associated point values to each of the moves. Did the tell you they’re going arrow but attack is going to do huge damage? Is your opponent going to be greedy? Or maybe they’ll choose counter thinking that you are the greedy one. The metagame is fascinating. 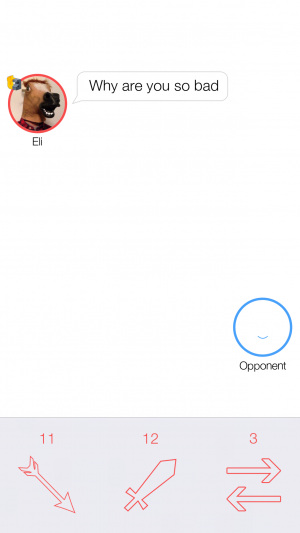 Typical random Game Center matchups rarely last more than a few turns, and playing with randos can make the game feel, well, totally random. But, at the same time, you can’t help but laugh when your opponent straight up tells you they’re going to attack and you decide to ignore it, then end up taking max damage instead. The biggest feature the game is missing right now is the ability to rematch, as I’ve had some great games with strangers that I would have loved to play again.

This is why playing with your stable of existing Game Center friends elevates Smarter Than You to something else entirely. Playing with people you know, either from the real world or online, can result in down to the wire games that feel like the moment you decide that you’re similarly going all in with your friend across the table as he pushes all his chips to the center in a game of poker… Only to be bluffed into losing. Playing with friends is stupid amounts of fun, for all the same reasons that playing any bluffing based game is.

The game is monetized in a way that any suit working in one of the many free to play megacorps out there would scoff at, and I think that only makes me like Smarter Than You more. The game is free to download, and you can play for free forever without seeing a single advertisement or being limited in any way. There’s no energy, no artificial stopping points, or anything else. Instead, the game is monetized entirely through tipping other players additional experience. 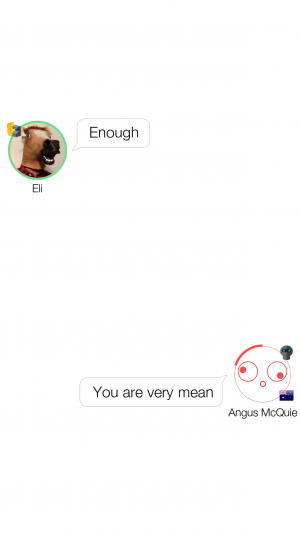 After a match is completed, win or lose, you get the option of tipping your opponent. Selecting this rolls a slot machine of sorts where you can award your opponent various experience bonuses for price points that range from free all the way up to $2.99. This itself is also an interesting mind game, as I’ve had great games with random opponents I really wanted to tip, only to have the tip roll to $2.99. Was your game that good that you want to toss out three bucks? It’s just one more (totally optional) decision in a game that’s all about making decisions.

Playing lots of Smarter Than You awards players with different pieces of flair to equip which basically just amount to graphical widgets that show off achievements. (There’s even easy to get TouchArcade flair.) As you level up through winning you’ll be able to play more games against more opponents at once, as well as different types of customization like choosing the look and color of your in-game avatar.

The only system which I haven’t figured out fully is there’s a way you can learn other words from your opponent. I’m really not sure where these come from, but when you play random people who use words that aren’t in your in-game vocabulary options you unlock them for your own use. Perhaps everyone is seeded their own “rare" words and unlocking these words for yourself is yet another game inside of Smarter Than You, or maybe I’m just over-analyzing. Either way, it’s a very subtle carrot on a stick that still has me playing random people even when I prefer matching with friends.

Reactions to Smarter Than You online seem to be incredibly polarized between people who love the incredibly clever ultra-minimalistic mind game that the 10000000 guy has created… And people who are ultra-disappointed that Smarter Than You isn’t 10000000. Me? I love the game, and since its release my phone buzzing at night to a Game Center alert from someone taking their turn in Smarter Than You has definitely been keeping me up playing way later than I was expecting when the game was first explained to me.

With a price point of $0, you owe it to yourself to at least give the game a shot. If nothing else, even if you totally hate it, it’s worth paying attention to just to see how its very strange monetization model plays out in the long run.