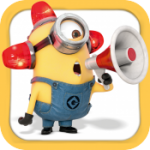 It’s been quite a while since we posted our review of Despicable Me: Minion Rush (Free), but the game’s crazy staying power on the charts has us taking another look at it. In essence, it’s Agent Dash (Free) and other similar lane-based runners bundled into a package dripping with Despicable Me references.

Like all of these games, it’s totally free too, with IAP that’s basically just skipping progression and unlocking the power ups early. You can get some better characters to run as through the premium currency, but that feels super-optional.

If you like the Despicable Me universe, and need another one of these style games, this is a great one. The character that the minions have is awesome, the power ups are fun, and it’s hard to come up with much to say about the game that isn’t positive aside from how often it tries to get you to spend money.