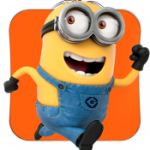 Every reader should make sure they’re sitting down before going on in this review. Are you comfortable? No sharp edges around that you could injure yourself on should you pass out from the shock of what I’m about to write? Okay, good.

Well, as you may know, there is a new sequel out to the excellent film Despicable Me. In a surprising turn of events, a games company has decided that this epic tale is a rich vein to be tapped for the medium of interactive entertainment, and has released a mobile game based on the movie. Wait, I haven’t even gotten to the most interesting part yet! It turns out that the genre deemed most suitable for the use of this license is a behind the back runner!

So, okay, Gameloft’s Despicable Me: Minion Rush (Free) is another licensed runner. This is a genre that has become so overcrowded that even the licensed games are having to find ways to mix things up, at least a little bit. Minion Rush does try a few things to keep the game fresh, but ultimately it leans pretty heavily on its license and just doing things generally well enough to prop it up. 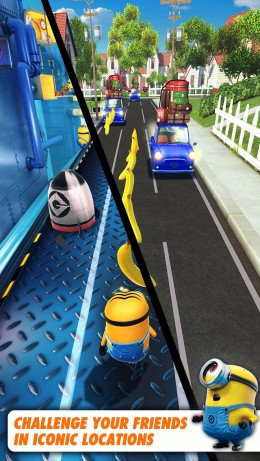 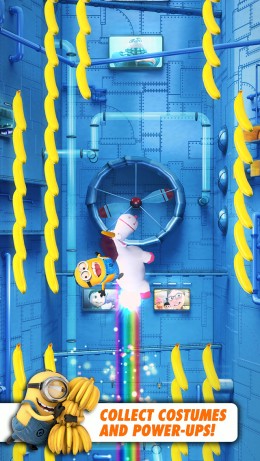 You play as one of the cute little minion characters from the movie, trying to become employee of the year by, I guess, running very far? It’s not clear what the purpose of the run is, apart from wreaking havoc, but I doubt anyone is playing this for the story.

Gameplay uses the familiar three-lane system, with swipes in four directions causing you to move to the next track, jump, or slide. There are bananas scattered all over the place, which act as one of the game’s two currencies. Additionally, there are several types of power-ups that appear, which can be additionally powered up by spending bananas. The other type of currency, tokens, sometimes appear too, but at a maximum of five per day. The game is incredibly stingy with its second currency relative to how much things cost, to the point that it’s basically worthless for anything but the occasional continue. 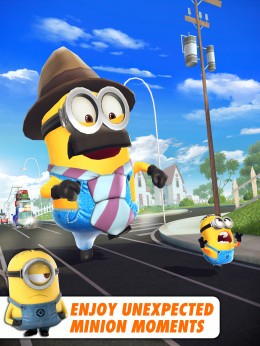 Like other games of this ilk, the key to doing well in Minion Rush is to drive your multiplier as high as you can. You can build your multiplier in the game by performing Despicable Acts. This is usually just running into or otherwise displacing your fellow minions, but you can also earn this bonus by wrecking things using some of the power-ups.

Your starting multiplier is determined by how many of the game’s missions you complete. You have three in play at any given time, one each from Gru, Dr. Nefario, or Gru’s daughters, with Gru’s generally being the most difficult to complete.

A disproportionate amount of these missions are connected with the game’s social features, such as recruiting your friends, beating their scores, issuing challenges, and so on. You can skip any mission using tokens, but it will use anywhere from six to ten days’ worth of them to do so. This basically means that unless you’re willing to spend real money on tokens, you’re going to have to harass your friends if you want to raise your multiplier much past the first couple of levels.

The game does a lot of things right, however. It’s a beautiful game, with popping colors and a lot of variety even within the same areas. The minions are very well-realized, with a lot of personality in their voices and animation. For the most part, every type of death has its own unique animation, and even on the menu screen, your character has all kinds of silly extra animation.

Minion Rush also does a good job of mixing up the gameplay, often switching perspective to a side view, challenging you to the occasional boss fight, and throwing in motion-controlled sliding segments. Two of the power-ups change things up completely for their duration, with the XXL Potion flipping the camera around to the front as you use tilt controls to control your giant minion while he smashes everything in his path, and the Fluffy Unicorn bringing you to a banana-filled vertical segment calling to mind Doodle Jump ($0.99).

You can also unlock extra costumes, which act more like new characters, each offering some type of special ability. Some of them can be bought with bananas, but most of them require – you guessed it – an insane amount of tokens. It’s unfortunate, because a lot of work seems to have gone into giving them all extra animations as well, and most people will probably never see them.

Minion Rush has almost nothing new to say, but it’s doing most of what it does very well, and the minions really liven things up with their personalities. In spite of my sarcasm in the first paragraph, these little guys do seem pretty well-matched for this kind of game, and Gru and Dr. Nefario’s inventions are a natural explanation for all the goofy power-ups these games seem to have.

It’s a shame the game is so stingy with its second currency and so pervasive with trying to get you to bug your friends. It’s the main wet blanket on the game, and it seems people in our forums agree. The genre’s been done to death, but if you’re up for yet another runner, this one is quite enjoyable, pretty funny, and free to boot.