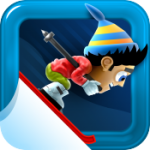 Ski Safari ($0.99) came out in early 2012, and we liked it quite a bit in our review. In a nutshell, it’s an endless runner… on skis. It has one touch controls that only allow you to flip, and the upgrade system will have you trying over and over and over again to get coins to upgrade just about everything in game.

Things start out a little rough in this video, but as soon as I get a feel for the game it all comes back to me- Culminating in a particularly impressive run featuring backflips on a snowmobile while a penguin, yeti, and eagle have all caught a ride.

Ski Safari has loads of new content since we reviewed it, and it’s really worth either picking up now or downloading again to unlock all the new insane upgrades.