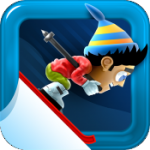 We’ve had our share of decent endless runners lately, and Defiant Development’s Ski Safari ($0.99), looks to continue that trend. With adorable graphics, great controls, and a decent amount of content, hits all the right notes for the genre and should be checked out.

Ski Safari challenges you to last as long as you can against an impending avalanche while you race down an eternal slope. In order to accomplish this, you’ll need to build up your speed (and score multiplier) and keep it up as long as possible. You can gain speed by performing a wide variety of tricks or by picking up ‘vehicles’ that range from penguins and yetis to hawks to even a snowmobile. Of course, several types of obstacles (rocks, ski cabins, e.t.c.) stand in your way to slow you down. It’s an interesting system that plays out like a constant tug-of-war between you and the never-ending avalanche. In some ways, the speed system is a bit vaguer than other endless runners but I think it adds to the tension and enjoyment. 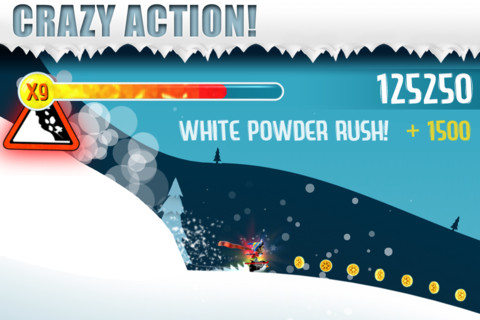 Of course, Ski Safari wouldn’t offer much in the replayability department if it only offered a simple race against inevitability. Thankfully, a decent objective/leveling system similar to the likes of Jetpack Joyride is always in play, offering nice distractions during the race. Completing sets of missions raises your rank and multiplier, allowing you to gain more points (and speed). While the mission system doesn’t necessarily bring anything new to the table, it’s still a welcome addition.

Like many endless runners, Ski Safari’s controls are a simple mixture of taps and holds. A quick tap will have your skier jump while holding down on the screen starts a backflip. Your backflip speed depends a lot on your velocity and vehicle, adding a bit to the strategy of whether or not to actually start a move. The control scheme definitely hits the mark for being accessible while offering just enough potential for strategy to keep you coming back. 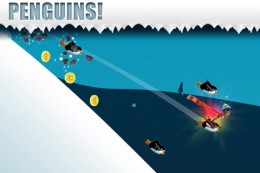 You’ll notice that once you get the hang of the gameplay runs can take quite a bit of time (relatively speaking) before they get hard. However, I don’t really see this as an issue as there are plenty of objectives to complete while you’re skiing and the ever-increasing multiplier means that you’ll eventually be able to reach those higher scores faster.

I’m a fan of Ski Safari’s lighthearted and playful presentation. Everything from the initial runs while asleep in bed to the mischievous music and cartoony visuals just illicit an amusing feeling. This continues with the pun-filled trick names and animal/vehicle companions. Obviously competent gameplay is an important facet for endless runners, but having well executed presentation goes a long way towards keeping me coming back. Thankfully, Ski Safari succeeds in all those aspects.

There are a few minor issues that I think keep Ski Safari from elite status. I really would have liked to see some sort of in-game use for all the coins you collect in a run. Even if it only offered cosmetic changes, an in-game shop goes a long way towards replayability. For that matter, while Ski Safari does a great job with its randomly generated runs, I hope that scenery changes are in the works for future updates. I really love the vehicle system and hope to see more options as well.

Still, Ski Safari definitely deserves to be put into the upper echelon of endless runners. The great presentation, well-implemented control scheme and overall enjoyable gameplay simply lead to a game worth playing. If you’re looking for the next great (and cute) endless runner, look no further and check out Ski Safari.