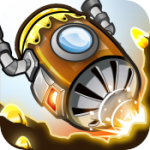 As you are probably well aware of by now, free-to-play endless runners are one of the most common types of games in the App Store. But whether it’s Punch Quest [Free] or Jetpack Joyride [Free], it tends to be the games that do something deeper with the genre that stand out.

Gold Diggers (Free) is among them in that although this is a game set on an endless loop that has you chasing after achievements and high scores, it does so in a way that may even make you forget that you are.

In Gold Diggers, you steer a spinning drill down into the depths of earth where giant Tremor worms, floating fire pillars, and dangerous magma corridors threaten your safety at every turn. The good news is that doing a run in Gold Diggers ends up being a pretty varied experience—it’s not just wave after wave of bad guys. 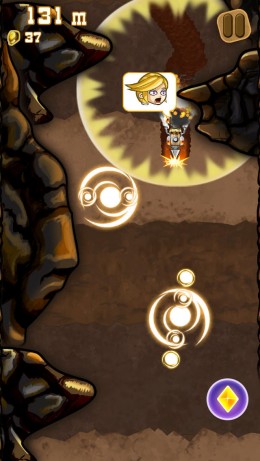 The game puts you through a sequence of scenes involving the aforementioned giant worms, fire pillars, and magma corridors—but also includes sections such as going down rail tracks ala Temple Run 2 [Free] and speeding away from the pursuit of a massive Mother Worm. Each section requires a different scene from a never-ending action movie—and because the game switches sections pretty quickly, it gets more and more intense the further down you get.

To accomplish this, Gold Diggers implements a familiar, yet pretty natural-feeling control scheme. Your drill is constantly moving downwards vertically toward the center of the earth, while moving side to side is done by moving your thumb from left to right on the screen—and that’s pretty much it. You can move left to right anywhere on the screen to move, but your thumb will end up getting in the way unless you do it at the bottom of the screen.

Each section has different power-ups such as speed boosters or guns that can help you—but everything is automated other than your ability to move left to right to keep things simple. Fortunately, the controls feel incredibly responsive and 1:1. I’m happy to report that unlike many games of this sort, I rarely found myself blaming the controls for my defeats.

But that doesn’t negate the fact that Gold Diggers is a really tough game for what it is. You’re given three “lives” per run (you can make three mistakes essentially) but it’s still not the kind of high score chaser that eases you into its harder levels of difficulty.

In fact, I found upon first try that the “casual” appeal of the game was quickly thrown out the window as I crashed my drill into various rock formations and rotating pillars of fire three times in a row. It’s for this reason that Gold Diggers probably won’t get the attention that it deserves—which is quite a shame.

The game features plenty of achievements to complete and special upgrades to buy, but it was the intense difficulty and tight controls that kept me coming back in attempts to master each of the sections—not the grinding.

Overall, that’s the highest kind of compliment you can give for Gold Diggers, a game in a genre that often relies heavily on in-app purchases and cheesy grinding schemes to bring players back. If that’s enough to entice you to try another endless runner, then Gold Diggers has a lot to offer.