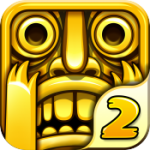 When Imangi Studios originally launched Temple Run (Free) in August of 2011, the small indie developer had no idea the kind of phenomenon it would go on to be. In fact it wasn’t even a success right off the bat, and only after a switch to free-to-play about a month after release did it start to build up some momentum before flourishing late in the year and all throughout 2012. The latest tally is that Temple Run has been downloaded and played by more than 170 million people across all platforms. That’s just insane.

Now with Temple Run a household name and the kind of bona fide success that can spawn a successful spinoff game with a major Disney movie in Temple Run Brave ($1.99), a proper sequel has stealthily landed in the App Store. Not a lot has changed in Temple Run 2 on a fundamental level, it still plays very much like the original game you know and love, but it has received a massive upgrade in the visual department along with a few new tweaks to the formula that make it a substantial improvement over the first game in just about every way. It feels like a fresh start, a new Temple Run that’s geared towards the future. 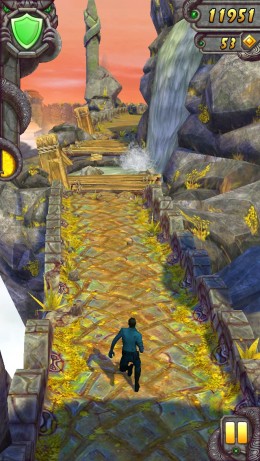 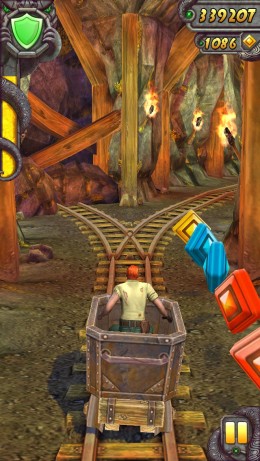 I’m sure most everyone is familiar with how Temple Run works, but just for kicks let’s go over the basics. You follow your perpetually running character from a third-person perspective as they’re being chased by a humongous demonic primate. You see, your adventurer swiped the beast’s precious idol and that didn’t seem to go over too well, so now you’ve got to run for your life.

Control of your character is handled by swiping up or down to jump over or slide under obstacles, and swiping left or right to turn when necessary. Tilting your device moves the character back and forth inside the lane for collecting coins and avoiding additional hazards. That’s about all there is to it, and it works great. Temple Run 2 is one of those perfect games to play with just a single free hand, for just a few minutes at a time or for hours on end as you tirelessly try to top your best run. Nothing has changed with the sequel in that regard. 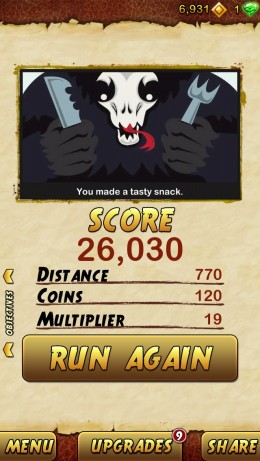 The biggest improvement in Temple Run 2 is in the graphics department. The game has been built from scratch in Unity and boasts gorgeous lighting and colors as well as extremely fluid animations. My one gripe is that the draw distance isn’t the best, which means environmental elements will pop-in right in front of your eyes. It doesn’t really bother if you’re focusing on not dying like you should be, but it’s still kind of disappointing considering what iOS devices are capable of.

The original Temple Run didn’t have that great of a draw distance either, but it was masked quite ingeniously using a fog effect that worked well with the dank jungle theme. In Temple Run 2 you’re running in a temple in the sky, so everything is right out there in the open. This new sky temple is great though, offering a much more dynamic feel to the level design. The track will curve, dip and elevate in ways that the rigid straightaways of the first game never did. It feels like a more organic environment, and it also keeps you on your toes just a tad bit more since you never really know what’s coming around the next bend.

Like I said before Temple Run 2 is a beautiful game, and there’s a greater variety to the types of scenery you’ll see, like various temple ruins architecture and forests with sunbeams poking through the leaves. There’s a couple of new environmental elements too, like a zip line to ride and mine cart sections. These parts aren’t drastically different from the rest of the game’s normal running, but they do add some additional drama and excitement to your adventure. 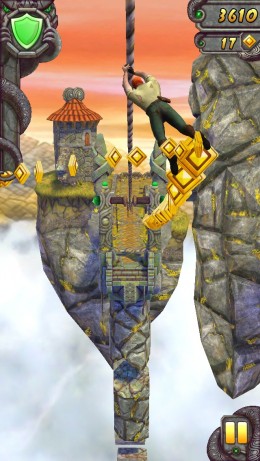 Temple Run 2 brings back 4 playable characters from the original, and each one is associated with a specific power-up. As you unlock the additional characters beyond the default Guy Dangerous, their associated power-ups become unlocked too for any character. There’s the standard set of upgradeable attributes too, like a Head Start boost and a coin value increaser, which are also shared across all characters.

The power-up you choose for your character can be activated with a double tap once you’ve collected enough coins to fill up the associated meter on your screen. The power-up itself can be upgraded too, using the game’s premium gem currency. Both coins and gems are available as IAP and are also earned through play. The coins come at a relatively fast clip, especially if you splurge on the IAP coin doubler, but the gems are typically few and far between. It still feels balanced though as the number of gems needed for normal upgrading is gradual.

One other use for the premium gems and something that’s a huge change in Temple Run 2 from its predecessor (as well as a point of contention with some of its fans) is the ability to continue your run after a death by spending gems. This essentially sullies the scoring as in theory you could drop enough cash on IAP gems that you could just continue on forever.

The cost to continue doubles in gems each time, and it’s possible there’s a limit to how much you can continue that I just haven’t seen yet. Even so I’m not super interested in the leaderboards anyway so it doesn’t really bother me, I just have fun playing for the sake of it. Still, adding a special “sudden death" leaderboard where continuing with gems isn’t allowed would be a nice compromise. Really what’s more annoying to me is the un-skippable continue countdown that plays after a run ends. It would be nice to be able to immediately retry.

If you weren’t a huge fan of the first Temple Run then I doubt the sequel will drastically change your mind. Though, it’s free, so I’d say just try it anyway just in case it clicks differently for you this time around. You don’t have anything to lose. If you loved the original game then I think you’ll love Temple Run 2 just as much or more so. Granted the continuing aspect is kind of suspect and there’s some minor technical issues, but Temple Run 2‘s improvements far outweigh its flaws.

There are plenty of more complex runners out there, and the beauty of the App Store is that you’re free to play any and all of them to suit your tastes. But Temple Run 2‘s simplicity and intangible “something" is what made its predecessor a game that I always went back to even in the face of a smorgasbord of alternatives, and it’s what will keep this on my device easily within thumb’s reach for a long time to come.