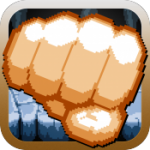 It shouldn’t come as much of a surprise that the unholy alliance between Rocketcat Games and Madgarden would result in one of the best free to play titles available on the App Store today. There’s some serious pedigree behind these two developers with Rocketcat contributing Hook Champ (Free), Super QuickHook (Free), and Mage Gauntlet (Free) to their side of the equation while Madgarden throws their hat into the ring via Saucelifter ($1.99), Sword of Fargoal (Free), Sword of Fargoal Legends ($2.99), and the upcoming Sword of Fargoal 2. All of those games would be on any short list of “must have iOS games" of mine, and Punch Quest (Free) easily finds a home among that list as well.

Punch Quest hinges on familiar endless runner tropes, in that the core of the game revolves around a “see how far you can go" mechanic. Where the game diverts from the rest of the pack is through a shockingly deep combat system and a focus on slaying as many enemies as possible- Making Punch Quest more of an endless puncher than an endless runner. In fact, if the game has a flaw, it’d be not making just how intricate the combat system is apparent to the player at first blush. 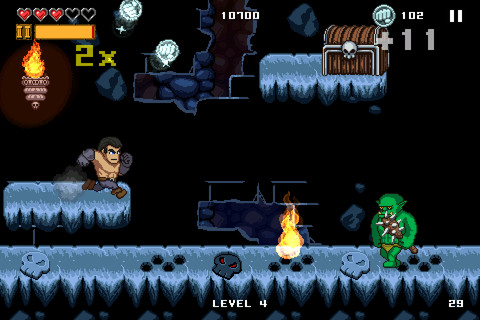 Tapping the left side of the screen executes an uppercut, and then tapping that same side a second time throws a downward punch. The right side of the screen controls your standard forward-facing punch, and once you spend the 10 Punchos to unlock the ability, holding both sides blocks. In Punch Quest you want to rack up and maintain huge combos, and as you get better at the game and notice all the little nuances between how to deal with the various enemy types and other tricks to keep combos going you sort of have a Neo seeing the Matrix moment- One of my favorite sensations while playing a video game.

As you play, you’re tasked with a familiar set of three objectives, ranging from simple things like kill X enemies to complex tasks involving using special abilities in certain ways. These are your bread and butter for earning Punchos, the in-game currency fueling the whole experience. With Punchos, you can buy all sorts of moves, single-use powerups, and persistent upgrades. Customizing which of these unlocks you have equipped adds an even greater level of depth to the game as clear combos become evident and crazy obscure mashups result in ridiculously lucky high scores. 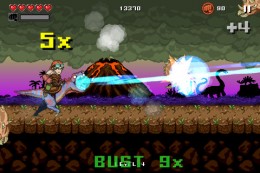 There’s all sorts of power-ups to discover in game, often as the result of choosing the proper direction in one of the many branching paths thrown your way. There’s even minibosses, collectable items, and tons of other surprises that I really don’t even want to list to not detract from the magic of stumbling across them. Oh, and like all Rocketcat games, there’s no shortage of hats to collect.

The ten trillion ton elephant in the room in any free to play game review is how obnoxious the game’s monetization is, and Punch Quest takes an insanely hands-off approach to directing players to buying the in-game currency. It’s almost worrying in a way, as there is absolutely no reason to buy any additional Punchos. The IAP is hidden in submenus, and Punchos are so plentifully earned in game via completing objectives and killing monsters that the general vibe I’ve seen towards the game is “I’m throwing a couple bucks at the game to support the developer" rather the all-too-often “Ugh, alright, I’ve hit the pay wall, you win, here’s my money" we see in far too many free to play titles.

This review is intentionally vague because I don’t want to rob anyone of the many “Did that just happen?" moments that Punch Quest fires your way, especially as you start investing Punchos into unlocking additional branching path types. What I will say, is that you need to download this game now. Punch Quest needs to be on every iOS device you own. It’s totally free, the only way the IAP could be less obtrusive is if they removed it entirely, and you’ll fall in love with the game inside of the first minute of play. What’s not to like about that?