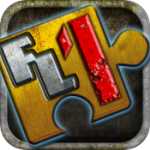 I don’t know what rock I was hiding under when the original Forever Lost: Episode 1 ($2.99) was released, but I have been kicking myself so hard lately for missing it, that I have no teeth left and it’s really hard to eat.

You see, I am a huge adventure game fan. I particularly love point-and-click adventures and the iPad is the perfect device to tackle the genre. So how the hell did I miss Forever Lost? Well, luckily, I stumbled across the sequel. But, since Forever Lost managed to slip through the cracks here at TouchArcade and didn’t receive a review, I have been tasked with writing up both games, though the bulk of this review will focus on the sequel, as it’s the one covered in the least dust.

In Forever Lost, you awaken in a derelict mental hospital and you are tasked with solving a bunch of puzzles in order to escape. Standard fare point-and-click stuff, though it is done extremely well.

Forever Lost screams quality. The rendered 3D visuals are super sexy (if you’re into decaying madhouses) and the haunting soundtrack immerses you in the creepiness wonderfully. 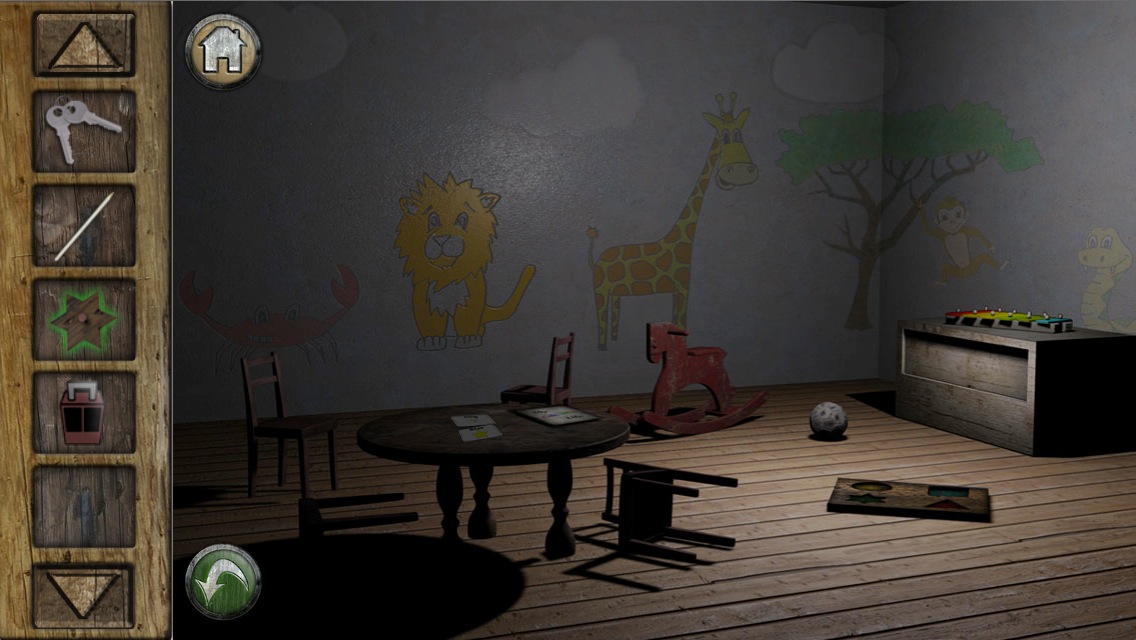 As with most adventure games, you come equipped with a satchel in which to carry around the various articles you need to solve puzzles, such as keys, puzzle pieces and even the kitchen sink… well, at least a tap… oops… I probably shouldn’t start giving out hints…

The puzzles range from numerical keypad codes to musical sequences, through to locating all of the strange heiroglyphs that are hidden about the hospital to use in one of the game’s final tests.

In Forever Lost, as well as the multitude of clues and objects you collect along the way, you have a camera (picked up early in the game) which can be used as a kind of visual diary. You take snaps of anything that you think you might need to remember for later reference and trust me, unless you have a photographic memory, you will need it. You can also scribble notes on the photos in case you forget why you took that particular snapshot, or what you might think it’s related to. The camera system works extremely well, with the only downside being that you will probably end up taking way too many photos, “just in case". It then becomes a bit of a chore sifting through the images of importance.

Actually, that was one small irk I had. You might find yourself thinking, “oh, I used this, I can delete it now", only to find that you’d just binned an important clue, resulting in a lot of backtracking. A system that tracks photos and progress and checks if you still need them would be a welcome addition – a simple “I think I’ll keep hold of this for now" voice prompt or similar.

You can also access computers and an iPad in the game to gain extra clues and even play a small Zelda-esque mini game, which needs to be completed to unearth objects and clues needed to succeed in the main game. This odd ability to be able to collect objects from a game and use it in the real world is only one of the many surreal and supernatural aspects to this chilling game.

The puzzles in Forever Lost: Episode 1 are always very logical. that’s not to say you won’t get stuck from time to time but the brain teasing is never overly abstract, unlike many games of this ilk. If you do find it all getting a bit too much for the old grey matter, there’s an extremely helpful hint guide located on the main title screen, but fear not, the game auto-saves, so you won’t find yourself having to ever backtrack.

Forever Lost isn’t a particularly massive game. I didn’t time how long it took me to complete it, but I had it beaten in a single night. However, I played it straight through and by the time I looked at my clock, it was two a.m… I was well and truly hooked. 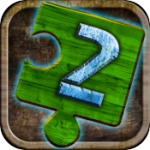 Once you find out how to open the exit and escape the game, you’ll be left with a vampire-like bloodlust for more adventuring. Enter Episode 2.

Forever Lost: Episode 2 ($4.99) is a direct continuation of its older brother and is instantly recognisable, as the visuals are nigh on identical to the prequel. there is no need to learn how any of the systems work as everything is the same as in the first installment.

(Minor Episode 1 spoiler ahead) Upon kicking off the game, a short intro refreshes the memory of the prequel, explaining how you discovered that you were underground for the whole experience. The second episode begins at the top of the well that you have just ascended, in an effort to escape your surreal nightmare. Unfortunately, it’s not over. (End spoiler.)

Forever Lost: Episode 2,as with its predecessor, is gorgeous. The 3D rendered scenes are absolutely stunning on a Retina iPad, equaling the prettiness of the likes of The Lost City ($1.99). The sound is limited to the odd effect to emphasize object interaction and moving about the virtual world, but the music is suitably eerie and of a very high quality.

Forever Lost: Episode 2 features the same simple, intuitive interface from Episode 1, which includes the home menu icon, your inventory, camera button and photo album. The camera feature, as with the first part of the series, is an integral part of the game. 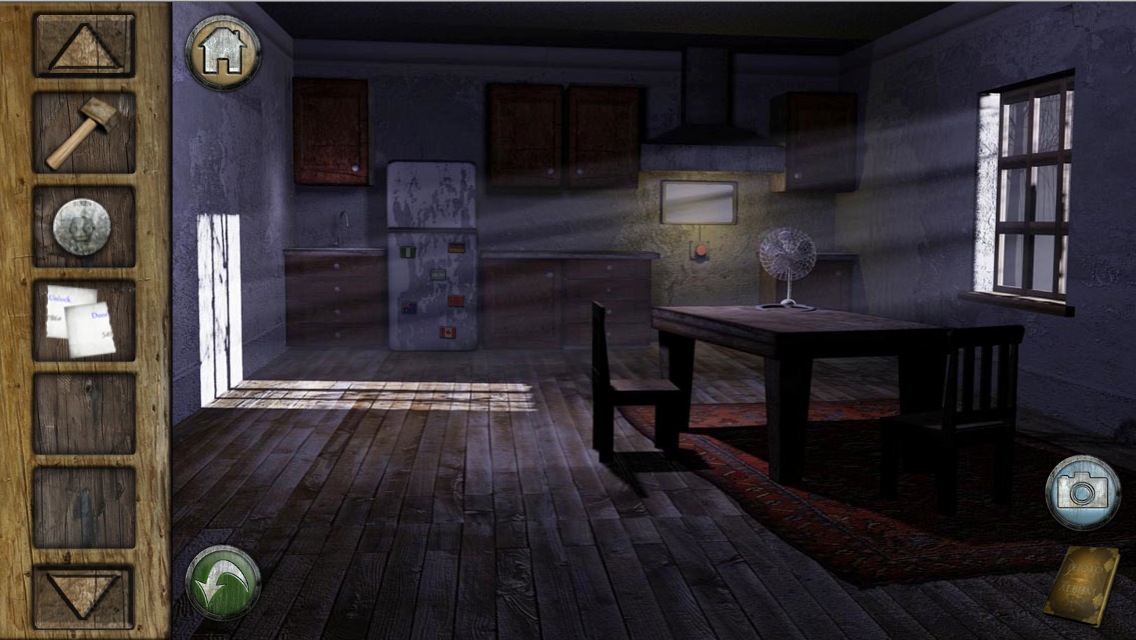 Again, the puzzles are extremely well thought out and never illogical, though often rather ghostly. I found myself visiting the (useful but not in an overly cheating way) hints page several times when I got stuck, and each time I simply smiled and thought to myself in my sweet dulcet internal tones “Oh, THAT’S what I was supposed to do, makes sense now!" and never something like, “Really? You use the chicken as a screwdriver to open the hot air balloon?" as was all too common in my recent play though of Runaway: A Road Adventure ($4.99).

There are some oddities in Episode 2 as with the first part, such as receiving items from a DVD special feature and even a handheld videogame that can be used in the real world, making the game a clearly supernatural affair, but it never feels misplaced or ruins the immersion.

The puzzles range from basic number combinations to playing arcade machines and even sports with a creepy doll head. The variety and cleverness of the puzzles is excellent and the massive list of testers in the end credits attest to the precision that went into nailing each and every one of them. The sheer number of puzzles is also well above Episode 1, and going by the amount of time it took me to complete and the number of hints in the hint book, I’d guess it’s at least twice the size of the original game.

The variety of areas to explore is also impressive, from dimly-lit woods to a ghostly mansion and dilapidated, underground school, the exploring never gets stale and requires minimal backtracking, a big improvement over the first episode’s single underground location.

The visuals, as well as being extremely slick, are also never busy or distracting, making sure you find each and every item you need to discover, and it never ends up in a random tap-fest in a quest to uncover items, as in many hidden object games.

To summarize, Forever Lost may not offer up any groundbreaking new gameplay technology or do anything overly different from the rest of the bunch, but what is does, it does extremely well. I haven’t been so engrossed in an iPad adventure since The Room (Free) and that goes for both episodes. Forever Lost is beautiful, macabre, engrossing and the puzzles are so well thought out and beautifully balanced that any adventure lover really shouldn’t be without these titles.

Despite the sequel being the bigger of the two, both games are of an equal and outstanding level of quality, so the rating applies to both installments. Do you need to play Episode 1 first? No, probably not, as Episode 2 is a fantastic standalone title, but trust me, if you’re an adventure fan, you won’t want to miss out on either and the sequel does begin to unravel the mystery that surrounds the first Forever Lost. Oh and there’s an Episode 3 on the way… oh, joyous days!