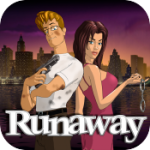 After releasing Runaway: A Twist of Fate on the app store in two parts, distributor Bulkypix has seen fit to step back in time and release Runaway: A Road Adventure ($4.99), the first of the series, only this time a single download. I’m not quite sure why they decided to mess with the space-time continuum in releasing the games in this backwards way, but at least you can now start from the beginning.

If you have already played through the PC version (originally released between 2001-2004, depending on location), you’ll probably want to give Road Adventure a miss, unless you really feel Mr. Nostalgia tugging at those heartstrings. The game remains untouched from the PC original, thankfully, and there is certainly a heap of content to keep you playing for days (weeks without walkthroughs – more on that later) but in my opinion, Runaway: A Road Adventure just isn’t good enough to want to slog through more than once.

The Runaway series follows the adventures of Brian and Gina, and in this first episode the two are thrown together by fate (or at least by the silly woman running into traffic) and they depart on a story of revenge, ancient artifacts and machine gun firing drag queens. 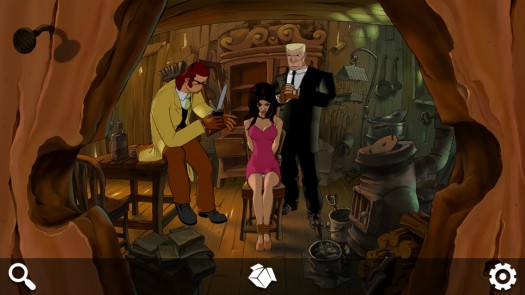 The story is average to say the least. For every twist in the plot there is an equal amount of holes big enough to drop in a herd of elephants. It seems that the writers decided that convenience was more important than clever writing. Unfortunately, the story isn’t where the bad stuff ends.

You can not help but compare Runaway with one of the greatest adventure series of all time, Broken Sword. Both feature the blonde male hero and the brunette female heroine, who happens to be a bit sexy. Both feature similar cartoon visuals and comedic voice-acting, though in this regard, Runaway falls flatter than a pancake that has been run over by a steamroller driven by thirty-eight linebackers. There are a few laughs to be had but for the most part, the lengthy conversations become a bit of a bore and you’ll soon find yourself reading the subtitles as fast as humanly possible, so as to get the story and just move on. The voice acting is sub-par, especially compared to that “other series". Brian Basco ain’t no George Stobbart, despite similarly old-fashioned names. 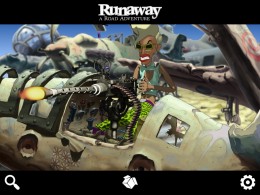 As well as storyline, a good adventure always hits you with loads of well thought out puzzles to get the grey matter churning. In the case of A Road Adventure, the puzzles are a very mixed bag. Sometimes the solutions to problems are relatively straight-forward, even logical, but all too often you are hit smack bang in the face with a puzzle that makes as much sense as swimming in fire.

If you ignore the temptation to hit up the many, many online walkthroughs, you’ll either be bashing yourself around the head with a concrete block or quite literally combining and using every item in the game with each other until you stumble across the solution. At that stage, you’d think you’d be thinking, “Oh, why didn’t I think of that?" but more often than not, it’s more like, “What in the…!? That makes no sense whatsoever and I want to hunt down and kill the developers with a large, blunt object!"

It’s not all bad though, and I may be being a bit overly harsh. You see, I also recently happened to play through Broken Sword and I was really in the mood for some adventuring with this one… exactly the same problem I had before I played the PC version a decade ago, at which point I was also playing through a BS episode. Runaway just doesn’t compare. Oh, wait, I’m getting all negative again. Ahem… on to the good bits. 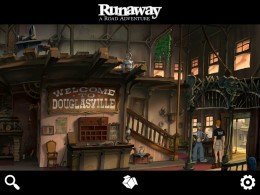 The graphics in Runaway: A Road Adventure are top notch and even stand out today. The backgrounds are beautifully painted and the cel-shaded models of the characters are nicely designed and animated. When you do manage to solve puzzles without help, there is that warm, fuzzy feeling, and there is plenty of game to keep you going. As an adventure game, it’s decent on the PC… but back to the negative bits.

On iOS, there are quite a few bugs. In several places I had the graphics all but disappear, being replaced by large, black rectangles, though as of writing this an update has been released that claims to fix video bugs. The game has also crashed on me several times, though luckily, it saves progress automatically, so nothing was lost. Also, there is no way to pinch zoom, so clicking on the correct area of the screen can be tricky, to say the least. At one stage during the third chapter, there are three items extremely close together and I had to press the screen over and over until I managed to hit the sweet spot for the object in the middle. You see, the human finger isn’t as small and sharp as a mouse pointer and add to the fact that I was playing this on a Retina iPad… well, I hate to think of the frustrations endowed upon you iPhone users.

On top of that, at one point in the game, there is a freezer… without giving too much away, there are several points on this item that need to be interacted with, two of which are the freezer itself and the freezer lid. Every time I clicked on either, Brian would attempt to move the freezer, resulting in a lengthy wait. What was supposed to happen when I clicked on the freezer lid is something completely different. I scratched my head until my brain fell out before hitting up the walkthroughs… nothing, I was doing it right. Eventually the game decided that it was supposed to do something different when I tapped on the freezer lid and it complied. I’m still at a loss as to why this happened and it very nearly stopped me dead in my adventuring tracks.

Ultimately, Runaway: A Road Adventure is a beautiful looking, average sounding, and at times, many times, frustrating experience. It’s a worthy addition to the collection if you’re into the old ‘point and click’ and it certainly isn’t bad… just keep in mind that it has a lot of flaws, some to do with the original design, some to do with the transition to mobile devices.