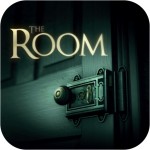 One room. Four walls, a ceiling, a floor—a claustrophobic space, if you can’t leave. Dark music, heartbeats and whispers. You could imagine the walls closing in while you scrabble for an exit. But The Room ($0.99) never lets you worry about any of that. There’s a time you stop caring about your surroundings, when you don’t care a whit about anything but what’s in front of you. It’s the moment your work absorbs you completely, or you’re on the trail of a mystery.

The mystery, in this case, is a box. A beautiful, ornate box with dozens of secrets and few answers to offer. It has levers and dials, locks and keys, parchment and clockwork. Manipulating them is a joy, the nearest thing to reality you can get on a screen. And all of it leads you deeper and deeper inside, into a nesting doll of mysteries. 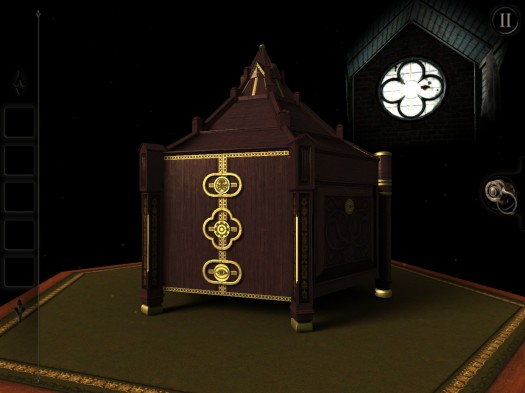 The box has many layers, each comprising a chapter of the game. Find the locks of each layer, discover the mechanics of opening them, and move on. The answers aren’t all where you’d expect to find them, though: some can only be found in the mystical world that lays beneath our own. The first step you’ll take in the game is to put together a device, an eyepiece, that lets you see into that world. And with its help, you’ll be able to solve the many puzzles The Room has to offer.

The eyepiece isn’t a clue system, mind—it’s integral to the puzzle design. Some puzzles can be solved entirely in the physical realm. Others need a tweak in the mystical realm, need to be manipulated in ways that shouldn’t be possible, but are—as long as you can see what isn’t there. If you can’t find what you need in either half of the world, there are clues as well. They aren’t held for ransom, either. The moment the game decides you’re stuck, you can tap a button and get pointed in the right direction.

The Room is a tactile sort of puzzle game. You won’t need to manage mathematics or language puzzles, you won’t really need to find many patterns. The main trick is just finding the missing pieces. They’re hidden cleverly, often in plain sight. You take the box in your hands, turn it over, peer closely, poke and prod. And it feels like it’s there in your hands. You turn keys with a satisfying thunk, slide drawers out and feel their weight, crank dials around and watch pieces turn in response. When you find the right pieces to manipulate, answers will be yours.

The mystery is never all that satisfyingly resolved, and The Room only has one chapter of the story to tell. It’s over a little too quickly, and as is so often the case with impossible mysteries, it ends on a question. But while it lasts it’s an elegant and engaging game, one that builds an atmosphere of dark experimentation. You don’t know quite where your search will take you, but it seems it won’t be good.

But how can you say no? The secrets are there to be found, and the puzzles so tantalizingly solvable. You might be looking into the abyss, but could you stop? Likely no more than could the man whose footsteps you follow. The search leads you on toward some greater truth—let’s hope the future of The Room makes that truth a little more satisfying.