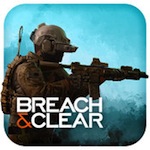 In this period of gaming in which every military shooter has to be so big, so blockbuster-y that it could even blow Michael Bay’s hair back, it sure is nice to play a contemplative shooter. Breach & Clear is just this.

At the top-level, Breach & Clear is a tactical, turn-based shooter. In it, you control a four-man squad across a variety of missions that, basically, boil down to busting into a building and taking out all the bad dudes in it. Breach‘s twist is that you’ve got to do methodically. An initial planning phase has you picking the best points of entry. Later, you’ll execute on this plan, stacking up on doors and entering into the facility with care towards sight lines and what might rush at you from opposite rooms.

The high lethality, as well as the turn-based play, really define Breach as a slow, and yet thrilling shooter. Your decisions matter. Forgetting to check a corner is bad news, and so is not taking advantage of cover or other tactical opportunities. This kind of stuff, the lack of absurdity, gives this an edge. You’re not an ultra marine, you know?

In a lot of ways, Breach plays out like a turn-based take on the Rainbow Six map screen. You could also probably argue that it plays like XCOM sans the aliens. And lasers. After all, one of its focuses is the element of the unknown — you never really know what’s behind the next door, and you’ll spend a great deal of time positioning as a result.

At the start of the game, you get a chance to pick one of four types of squads. Each of which has its own stats. Interestingly, as you play, your squad levels up. Also, there’s an equipment screen where you can pick out the right guns for the job. The catch here is that guns, medic packs, and even helmets, cost in-game currency. You earn this funny money as you play, but you can also dish out real dough for it, too.

It’s hard to tell how the economy is weighed. Is it friendly? Or is it geared towards an IAP or two? Does this have an effect on the actual game part? In the game’s past life, it was a free-to-play title, so those are some Q’s we’ll definitely be thinking about as we plug away.

You can grab the game tonight, if you’d like, at around 11:00 PM EST. We’ll have a full review in the near future.