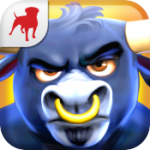 Zynga gets a lot of flack for a myriad of reasons. This is typically due to ripping off other people’s original ideas, spamming your Facebook feed (and your friends) with useless requests, or making a game that primarily exists to be an IAP cash cow. Did the inevitable finally happen, and they actually delivered a game that at its core is designed to be fun and playable?

Running With Friends (Free) has been out in Canada for a while and was finally released worldwide a couple of weeks ago. I decided to check the game out for myself since it’s free, and much to my delight, Zynga has added a successful social component to separate this runner from other games in the genre.

A comparison to Temple Run (Free) is quite unavoidable at this point, so let’s address that elephant in this review already. Frankly, Temple Run is indeed considered the father of all iOS runners. However if anyone’s going to have beef with this game, Subway Surfers‘ (Free) is definitely its rival. In its core, Running With Friends is a touch-controlled lane-based runner as a opposed to Temple Run‘s tilt-based method of moving side to side within the game’s levels. 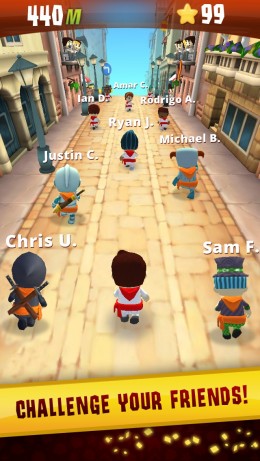 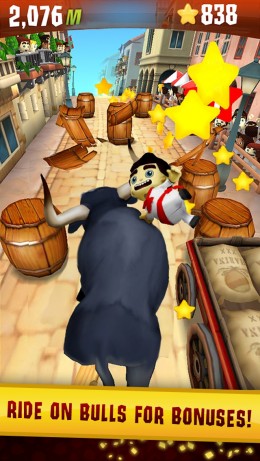 Running With Friends has you partaking in the famous Running of the Bulls and as you run away from the pack of charging bulls you’ll also need to avoid other obstacles which includes fruit carts, other players running for their lives, trains and more. Along the way, there’s your usual stars and bonus letter pickups. Your runs are graded both by distance and the number of stars you pick up, and completing words by picking up all the letters earns you gems. Combined, this will give you experience points to level up and gems which can be used to either resurrect yourself or buy new avatars.

The game does not have a single-player mode (hence its title), but it does have three ways to play with other people: against Facebook friends, through automatic smart match or manually entering a friend’s username. Playing with friends takes place across three rounds. At the end, your totals are added up to see who won and who lost.

Running With Friends lives and dies with its “social gaming" component feature. Unfortunately, there aren’t a lot of power-ups you could pick up or upgrade, nor could you customize your own avatar. There are no ways to earn extra gems which some other games do through daily challengers/leaderboards or by watching ads.

This is not to say playing with your friends isn’t fun, because it is. It would be unfair though not to judge and compare the game to its predecessors. There’s a lot of time wasting that can be spent running against friends even though there’s only one locale. The environment changes a lot and jumping through rivers, stairs and above bulls themselves can prove enjoyable enough.

Sure there are a lot of running games out there, but why not try running with your friends for a change? I presume this feature will be trickled down to other running games sometime soon, and we can have Zynga to thank for that.