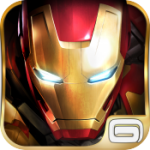 You smash down into the outside of an airport. There are a swarm of yellow baddies attacking the place. J.A.R.V.I.S. tells you to get going while you can. You touch a button on your suit. You’re flying through the air.

This is how Iron Man 3 [Free] begins, the iOS game based on the $1B grossing film of its namesake. Gameloft’s latest casts you as the famous Tony Stark, on a quest to save the world from the evil ne’er-do-wells. While fun, the game sadly is in stark contrast to its business model, which partly goes against the protagonist.

The first thing you’ll notice are Iron Man 3’s graphics; they are outstanding. Gameloft has definitely gone to great lengths to make the game look good. Iron Man’s suit is reflective, which slightly shows off the world surrounding him. The environment is lush and detailed, making you feel like you’re actually in a living, breathing world, not laying in bed with your iOS device on your lap. However, the environments are also very limited, and you’ll quickly wish for some variety. 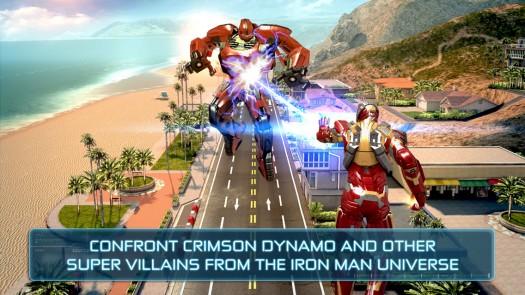 Because of these graphics (or in spite of?), the game seems very laggy. On my iPad Retina, even when there wasn’t a lot of action on screen, it would lag a little. It’s not enough to distract from the gameplay, but it’s enough to notice.

After the opening sequence, in which we’re introduced to A.I.M., and seeing an airport come under attack, Iron Man zips through a tunnel, and emerges on a highway. At this point, we’re playing what is basically an endless runner. The tutorial guides you through the basics, how to control Iron Man and dodge obstacles while collecting Stark Credits and defeating enemies. 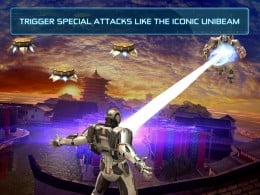 The controls are pretty simple; slide left and right to move to whatever lane you desire and to avoid oncoming obstacles. (If you desire tilt-based movement, your wish can be fulfilled through the options menu.) You’ll also take further up into the air, where the game introduces you to your first enemy and how to kill them, by swiping left to right (or vice versa) over them. Swiping can lead to chain combos, which will improve your score at the end, but most enemies can also be defeated by simply tapping on them (some requiring multiple taps).

With that being said, the control scheme, regardless of the method you choose, feels very sensitive, even on a low sensitivity setting. The slightest touch or tilt will send Tony to the other side of the screen, and considering how fast and frantic some of the action is, this can result in an untimely death. There were a few times where I noticed a lull in the action. I’d be flying for a good ten seconds with no obstacles, no credits to collect, and no enemies to fight. I’m unsure if this is a result of the game loading something upcoming in the background, is intended to provide a break of sorts, or is an unintended action.

As you progress, you’ll start getting missions. These are all pretty common fare, and do nothing to further the genre. Defeat ten enemies in a single run, narrowly avoid ten jets in a single run, or run a total distance of 100,000, to name a few. You’ll also get daily missions that award ISO-8, such as flying a set distance and then defeating a special boss from the Iron Man universe, such as Crimson Dynamo. 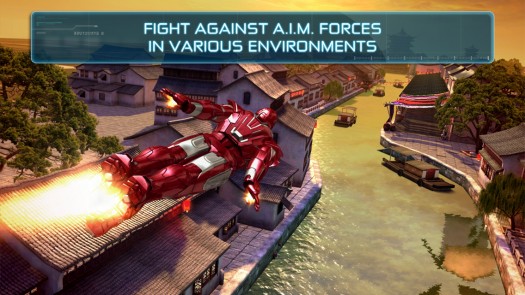 These encounters are unique in that they change the game dynamics as well as serve to advance the storyline; instead of the basic runner, you’re thrown up close and personal. Iron Man 3 also gives you the option to use some powerups, which cost premium currency. You can get a head start at the beginning, or double the amount of Stark Credits you pick up.

At the end of your run, there’s no option to immediately restart; instead, you’re presented with a Stark Industries button, which takes you to the suit upgrade screen. As well as this, depending on how much damage you sustained during your run before you finish, you may have to wait while your suit gets “fixed”. Spending some premium currency, ISO-8, will make this process instant. 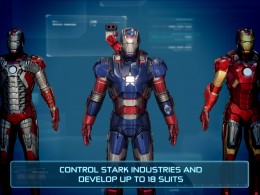 The further you travel, the more XP and Stark Credits you’ll earn, which are used to upgrade your suit. The three basic fields to upgrade are Special, Weapon and HP. When purchasing an upgrade, there is an “installation” period, which can be bypassed by spending ISO-8.

Like any good running game, you’re rated in various categories; these are distance traveled, combo score, enemies defeated and avoidance score. Naturally, the higher your score, the more credits and experience you’ll earn. With earning experience comes a level system. Each time you increase in level, you earn one ISO-8. As you gain further levels, you’ll unlock different suit trees. There are three main suits available. The default suit, Striker Missile (or Mark III), is the Iron Man everyone knows, and it comes with a score multiplier of 1.0. The first suit available to purchase, Unibeam Blast (or Mark V), increases the multiplier, and has different stats. The third suit, Frost Charge (or Mark II), continues.

Each suit has a tree attached to it. To unlock a suit, the previous one must be purchased first. You purchase suits with experience points (or ISO-8), and then use Stark Credits to build the suit. Clearly, the game has been designed to make you grind out everything, unless you spend real money. There is Facebook and Game Center integration here, so not only can you challenge friends, but you can also collect trophies which earn ISO-8.

For fans of Tony Stark and his universe, Iron Man 3 is definitely a fun adventure. For those who care nothing whatsoever for comics or the Iron Man universe, it’s still fun as an endless runner. It doesn’t feel as finished as other Gameloft games, but time may change that. But be prepared to either spend lots of your time, or your money, to get the most out of Iron Man 3.