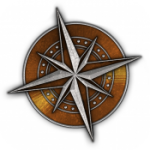 From the moment Leviathan: Warships ($1.99) was announced, I was crackling with an electric anticipation. Published by the developer of some of my favorite PC games, Paradox Interactive, this strategic naval combat game challenges players to outfit and lead a fleet against AI and online opponents. Set in an alternate history, beautifully stylized ships combine traditional firepower with a few high-tech tricks like beam weapons and energy shields. Personally, I can’t think of many game concepts that would get me more excited than this one. But, as Leviathan: Warships has reminded me, even amazing concepts don’t always translate into amazing experiences.

The game blends interesting elements of several PC games I’ve enjoyed over the years, such as the mixed turn-based and real-time naval combat of the Age of Sail series (1996-2002), and the fantastical-but-familiar-feeling, derring-do, alternate history of Crimson Skies (2000). A 2011 Crimson Skies-cribbing iOS release, Crimson Steam Pirates, featured ship-based combat comparable to Leviathan: Warships, but it offered much simpler gameplay, and its content was limited to few single player campaigns and modest local multiplayer capability. So from its outset, Leviathan: Warships–promising deep strategy, robust customization, and an ambitious, cross-platform multiplayer experience–was boldly setting sail into unexplored waters. 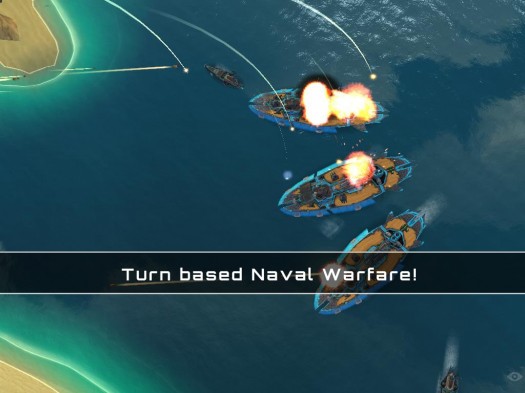 At its core–the actual naval combat–the game delivers. As mentioned above, Leviathan: Warships combines turn-based and real-time gameplay, and it’s a graceful union. Each turn, players give their ships commands (controlling movement, changing bearing, precision firing, etc.), then every fleet moves simultaneously as the game plays out in real time for ten seconds, before heading back to the planning phase. Players must think ahead, give their commands, and ultimately hope for the best, and that realistic delay between order and execution adds a sense of tension and mystery. The game features a series of basic tutorial missions, after which most players will find the combat fairly intuitive.

The game features an underwhelming variety of ships (five, not counting a few bonus ships available via day one in-app purchases which, incidentally, cost more than the full game itself), but the ability to customize and outfit them for various roles and situations offers players a wide range of possibilities. Different ships excel at different tasks, and have been well-balanced to compliment one another. Scout boats are–as you might guess–small and fragile, but they’re perfect for rushing ahead to, say, lay a minefield, or to obtain visual contact on a hidden enemy so an artillery ship to bombard it from across the map. On the other hand, a tough, stout Atlas-class vessel can make an ideal weapons platform, and can deliver a devastating broadside – that is, if it can manage to lumber into an advantageous position. The ships have a realistic feel as they glide (or plod) through the water, and when the shells start flying, the ships’ big guns feel big. 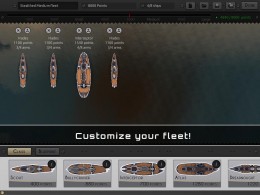 There’s a decent selection of weapons available to players, and each type has a different firing arc and range, adding yet another layer of tactical complexity. Sure, you can arm your dreadnought to the teeth with nothing but the most gargantuan guns, but if a smaller ship sneaks inside of those guns’ range, you might end up bobbing about helplessly as the pest slowly chips away at your hull. To avoid these situations, it’s wise to consider equipping more balanced weapon loadouts, and/or–even better–adopting tactics that allow ships to cover one another.

While the combat itself is enjoyable, Leviathan: Warships isn’t all smooth sailing. The game got off to an inauspicious start with a botched iOS release. Since the game doesn’t support retina displays, Paradox presumably had to rush to meet Apple’s May 1st “all future apps must have retina support" deadline. On release day, the multiplayer component (i.e., the lion’s share of the game) was completely non-functional. Leviathan: Warships was quickly pulled from the iTunes store, and first-day customers didn’t see a re-released update until a week later. While these release-related troubles are water under the bridge at this point, the situation has definitely colored my view of the game’s remaining rough edges, leaving me to wonder how much a rushed deadline might have contributed to other flaws in the final product. 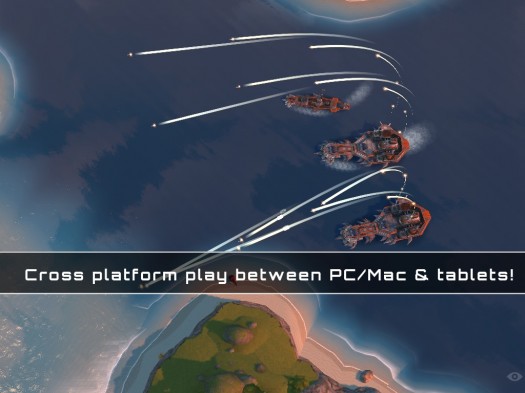 The Leviathan: Warships interface feels clunky. Small buttons and icons with stingy touch targets make mis-taps and non-registering taps a regular occurrence. Menus can be particularly laggy, often leaving you to wonder for a few seconds if your last tap registered or not. Some players have also reported frequent game crashes, but while I have been experiencing them from time-to-time, they haven’t been frequent enough to seriously compromise my experience.

Leviathan: Warships is primarily focused on multiplayer, offering limited cooperative play and two player-versus-player modes. This is where fleet customization really shines, and the ability to save your custom ship configurations as “blueprints" is a major convenience, allowing you to quickly load up your favorite arsenal with no fuss. Gameplay is asynchronous, and depending on your preference and game settings, you and your opponent can play out a match over the course of days, or sit down together and finish an entire game in one sitting. Cross-platform gameplay is an exciting and functional feature, allowing iOS players to connect with other players on Android and Steam. For owners of Leviathan: Warships on multiple platforms, syncing also makes saved games available and playable from any copy of the game. 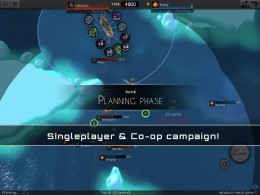 When attempting to start a multiplayer game, matchmaking with random players can be inconsistent. Sometimes I’ll be able to get a game started in thirty seconds or so, but just as frequently I’ll have to wait several minutes. Occasionally the server won’t pair me up with another player at all before I give up and close the app in frustration. I’ve also had issues with the game staying connected. Even on the steadiest of internet connections, I’ll frequently get booted back to the main menu, forcing me to once again enter my password and log in. And if you happen to get disconnected while outfitting your fleet and creating custom blueprints, all work done since your last manual save will be lost.

My biggest disappointment with Leviathan: Warships is the lack of effort put into the offline, single player component. Aside from a short tutorial campaign, the single player experience consists of one uninspired, nine mission story campaign, as well as several challenge missions (which are just individual copy/pasted bits and pieces of the story campaign). That’s it. I was surprised to find that–unlike so many games in this genre–there’s no way to play any sort of random battle against the AI. Normally the absence of this feature wouldn’t bother me so much, but in this case it really hamstrings the aspect of Leviathan: Warships that intrigued me more than any other: the robust ship customization system.

Going into this game, I was looking forward to tinkering and experimenting with various ship builds and fleet combinations. I could spend hours messing around with this feature, trying new tactics and testing unconventional ideas. But many of my ideas aren’t going to work. Being able to quickly jump in and out of a single player, offline game would have let me quickly test and tweak these experimental builds. With the time and effort (and implied commitment to the other player) involved in a multiplayer game, that kind of instant hop-in/hop-out testing and refinement just isn’t practical.

My spark has faded since the game’s release, but I’m still very excited about its potential. In the PC world, Paradox Interactive has a history of releasing buggy games that get exponentially better over the course of several updates. While I can’t review a game based on its future potential for improvement, I’ll be keeping a close eye on its evolution in the months ahead. With luck, it will grow into a more stable and user-friendly game, and players will see more content and a few more elements of basic functionality that they’d expect from this sort of strategy game.

As is, it’s not a particularly user-friendly experience, but when you dive below the surface, the core gameplay is worth a look. Check out our forum thread to read more impressions, or to join in the discussion. If the theme, aesthetics, or mechanics of Leviathan: Warships give your attention a jolt, you too might find yourself willing to overlook the game’s frustrations to enjoy the most ambitious, creative take on naval combat I’ve experienced in a very long time.