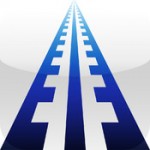 Kevin Ng’s upcoming Impossible Road has the look and feel of an everyday mobile arcade game, but it’s definitely not. In it, you guide a ball down an infinitely winding neon stretch of track, collecting points as you rocket through the numbered gates that line it. It’s a simple, breezy task where death comes fast because the track twists, turns, and falls into itself. As you play, though, you start noticing gaps in the system. For instance, the ball doesn’t need to follow the track linearly. You can let it fall off and land onto a stretch that’s deeper down. You can also skip gates, too, and earn the same amount of points that a person that managed to hit them all would. Also, the ball doesn’t even need to roll down. If you’re a bad enough dude, you can just keep throwing it off the track and controlling its ricochet off of the curves.

I thought I was a crazy person when I started noticing this, but sure enough, Ng notes in the app description that this is a game about exploitation. “And when you learn how to cheat the game and you discover that it is rewarded not punished," the description reads, " the leaderboards will belong to you."

As far as physics and feel go, Impossible Road is hard to measure. I mean, as an arcade line game it feels OK. I mean, you can keep the ball on the track and it has a decent amount of weight and predictability behind it. But, the point seems to reside in breaking the game part, letting the ball tumble and roll and bounce off lower swathes of track — you know, stuff that you’re typically not supposed to be doing. Does it feel a little funky as a result? Sure, a little.

Strangely, Road also has that one-more-time thing going for it. I’d still be playing if I didn’t NEED to stop and let you guys know about it. Does this say something about how much fun subversive play can be? I don’t know! But since I plan to go back and keep racking up my sick scores that I totally broke the game for, may it does.

Impossible Road will be out tonight at around 11PM EST. You can add the game to your Watch List on our app (Free) and get a notification whenever it makes it over alongside the rest of tonight’s releases.