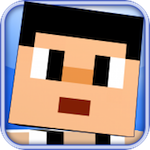 In recent years, Minecraft has become the common ancestor of an entire sandbox subgenre. While it boasts a player base bursting with creativity, this is a subgenre that often suffers at the hands of less ambitious developers. Uninspired Minecraft imitations continue to pour into the iOS market, each trying to capture and cash in on a piece of Mojang’s magic formula. Cast adrift on an ocean of Cavern Clones, Block Knock-offs, and Tryin’crafts, I sometimes catch myself wondering if it’s all been done; if we’ve already seen the best Minecraft‘s successors have to offer. But then, inevitably, a new diamond emerges from the coal pile to disabuse me of that notion. The Blockheads (Free) is the latest game to set me straight.

So… what’s its gimmick? What exactly makes The Blockheads stand out? Normally, the Minecraft-inspired iOS games that grab my attention are titles that take the original’s block-sandbox premise and spin it in some wild new direction. Block Fortress, for example, created a fresh, intense experience by combining elements of Minecraft and the tower defense genre. Another of my recent favorites, Junk Jack, rebooted the block-sandbox aesthetic, resulting in a charming game with a look and feel so distinct that I occasionally forgot about its Minecraft roots altogether. 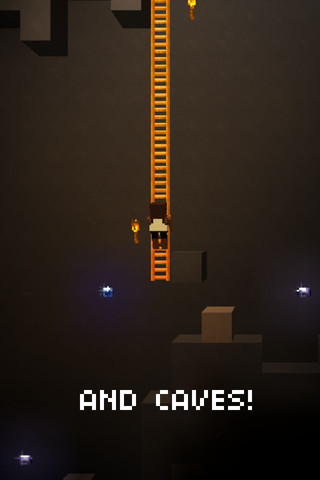 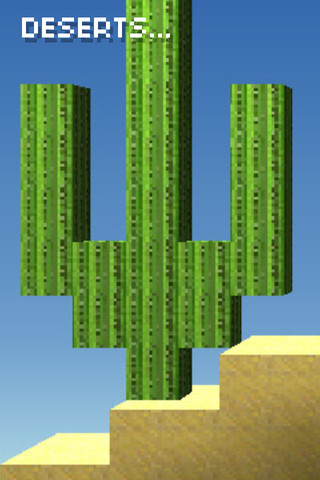 Like Junk Jack, The Blockheads uses a 2-D side-scrolling approach to create a pleasant looking, iOS device-friendly representation of a block-based world. But in stark contrast to its stand-out peers, The Blockheads doesn’t achieve greatness through sweeping gameplay innovation, nor through other drastic departures in visual style. Instead, it stands out simply by delivering a first class gameplay experience while clinging faithfully to its source material.

Despite the switch to a side-scrolling perspective, on a broad level The Blockheads looks and feels a whole lot like old-school Minecraft. It’s by no means a direct copy, but it does nail “the vibe" perfectly. If this were a bad game, I’d be quick to use that comparison against it, but as I started sinking hours into The Blockheads, it became obvious that this is no cheap clone or cash-in. The game could accurately be called an homage, I suppose, but even that feels like a bit of a back-handed compliment. Instead, I’d sum up The Blockheads like this: a reimagining of Minecraft by a developer who knows exactly what he likes about Minecraft, has a vision for how it could work even better on an iOS device, and possesses the technical skill to bring that vision to life.

None of this is to say that The Blockheads doesn’t offer fresh gameplay ideas of its own. Although the game shines through its well-executed similarities to Minecraft, once you dive in, a number of clever twists and original gameplay elements do stand out. 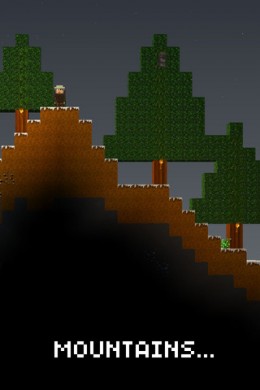 Blockheads have multiple needs. In addition to hunger, sleep and environmental factors (time of day, weather, etc.) also affect avatar efficiency. I was initially skeptical about this mechanic, worried that constant The Sims-style babysitting breaks would get in the way of my creative endeavors. Instead, such needs have only served to heighten my sense of immersion, organically creating a motivation for growing food, seeking shelter, and following the natural day/night rhythm of the game world.

The Blockheads‘s crafting system has received a subtle overhaul that nicely lends itself to iOS gaming. Players can now build and upgrade a wider variety of specialized crafting stations (i.e., tool benches, kilns, tailor’s benches, etc.). Instead of experimentally dragging materials around on an all-in-one crafting interface (trying to recall or stumble across a particular recipe), you can now see every available recipe clearly listed when you interact with the appropriate crafting station. While I don’t dislike Minecraft‘s more experimental method of crafting when playing on a desktop or laptop, in an iOS title like this, it’s convenient to have the ability to craft objects without dragging materials into specific patterns or referring to FAQs.

The world spaces of The Blockheads are never boring. During your explorations, you’ll find towering cliffs, sprawling caverns, and a variety of biomes give each randomly-generated world a life of its own. While quite large, the game’s randomly generated worlds can be completely circumnavigated. The implications of this are probably best for players to discover for themselves as they hike cross-country, sail across oceans, or delve downward, but suffice it to say that this tiny feature has resulted in some of my favorite moments yet in any Minecraft-inspired game.

The game’s most notable new feature is suggested in its title; it’s called The Blockheads, not “The Blockhead." Once your game gets rolling and you build up the necessary resources, you can warp up to three additional characters into your world. This allows players to streamline their exploration and crafting efforts. I’ve gotten into the habit of sending a team of two explorers to trek across the game-world, where they can set up an away-camp and explore some distant cavern for valuable resources. Meanwhile, I can keep my other two Blockheads at home, churning out replacement tools, tending to crops, etc. 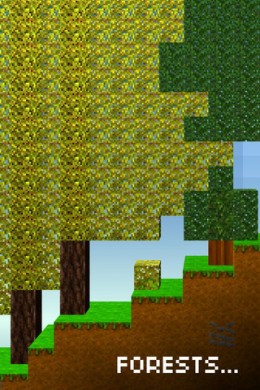 The Blockheads features a passable two-player mode, if you’re seeking collaborative creation. However, if your primary interest is multiplayer, you might find that other Minecraft-inspired games do a better job of scratching your itch (including–at least for the time being–a combination of Minecraft PE and Multiplayer for Minecraft PE).

As a free-to-play game, there’s no reason that every Minecraft fan shouldn’t give this title a shot. In-app purchases do exist, primarily in the form of “Time Crystals." Crafting items in The Blockheads takes time, and Time Crystals can be used to instantly finish any crafting project. Crystals can also be spent to purchase special powered-up tools (such as pick-axes with 2x and 3x harvesting multipliers), and they are also needed to warp additional Blockheads into your game world.

When I first read about the Time Crystal system, I was immediately suspicious that it would bog down gameplay and create an unavoidable paywall. But my fears were unfounded. Items never take hours or days to craft; they take seconds, or occasionally–for more complicated items/upgrades–minutes). Crafting only gets noticeably drawn out if you’re attempting to create a large stack of items (i.e., a dozen shovels, ingots, etc.). But thanks to a recent update, your Blockheads will continue to work even after you’ve exited the game, so if a crafting queue seems too long, you can easily go do something else on your iOS device for a few minutes while your Blockhead toils away. The process gets even easier once you’ve unlocked multiple Blockheads; you can easily assign a lengthy job to one character, then leave her/him to it while you go play using another character. If crafting still feels too drawn out, the game offers a one-time “Double Time" upgrade — which halves crafting times — as another IAP option.

Time Crystals can occasionally be found and mined in the game world, and while relying on this method will definitely slow your progress toward a few objectives (such as acquiring additional Blockheads), it’s perfectly feasible to experience every aspect of the game without in-app purchases. I know everyone has a different level of tolerance for IAP these days, but here’s one observation that seemed worth noting: By the time I shelled out a few bucks for The Blockhead‘s Double Time upgrade and a small pack of Time Crystals (even though I didn’t have to), I felt perfectly happy to give a few dollars to the developer. In a market where so many games implement IAP currency systems and paywalls in ways that feel manipulative, I consider it a very good sign when a game’s IAP feels like it’s genuinely worth the investment.

Following its most recent update, I’m hard-pressed to put my finger on any major shortcomings of The Blockheads. The controls are quite intuitive, and a single tap will tell your Blockhead to mine, harvest, pick-up, etc. a block (as opposed to Junk Jack‘s tap-tap-tap-tap-tap approach, which can be hard on the fingertips). If the camera is zoomed out, accidentally tapping on an adjacent block can be an issue, after which you’ll find yourself scrambling to cancel the command before your Blockheads reaches it and starts interacting. Zooming in before doing any precision tapping will help to avoid this quirk, and even if your Blockhead does place or remove a block incorrectly, the resulting situation is typically one that can be fixed within a few seconds.

Another area for improvement is that the game would benefit from a little more… stuff. More craftables, more decorations, more wildlife, etc. In the game’s current state, however, I couldn’t honestly call this a shortcoming. It never feels like there’s a shortage of content. Instead, it feels like I’ve gotten in on this game at a really exciting point in its evolution. Which, appropriately, is one of the things I’ve loved about Minecraft over the years. The Blockheads certainly has a huge head start on Minecraft Pocket Edition, considering the bare-bones state that title was in when it was first released. And if the two games maintain their current trajectories, The Blockheads will only continue to widen the gap. As evidence of the good things to come, when David Frampton from Majic Jungle Software engages with his player base, he frequently talks about the evolving feature-set he has in store for his game. Judging from his successes so far, I have no reason to doubt his motivation and ability to follow through.

Check out our forum thread for more The Blockheads discussion. Surprisingly, just about every The Blockheads player I’ve chatted with personally has said one of the following three things: 1.) “It’s almost as fun as Minecraft PE!" 2.) “It’s just as much fun as Minecraft PE!" 3.) “It’s even more fun than Minecraft PE!"  Honestly, a few months after the release of The Blockheads, I’m still not sure which of these three camps I’m in, but I’m definitely somewhere on that spectrum. I do love Minecraft in all its forms, but when it gets down to it, it’s true that I don’t play the iOS version all that often these days. When I want that kind of experience, I’d vastly prefer playing it on my desktop or laptop, with more precise controls, a more complete feature-set, and the ability to soak up all those blockily beautiful first-person vistas on a bigger screen. On an iPhone or iPad, the 2-D, side-scrolling block-based sandbox is a winning formula, and The Blockheads is the most well-executed, true-to-Minecraft game I’ve had the pleasure to experience on iOS.