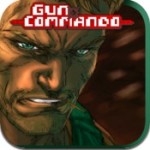 Earlier this month we told you that Gun Commando, a retro-styled first-person shooter previously released on PlayStation Mobile devices, was on its way to the App Store, and it’s worming its way through international markets as we speak and should land in the US later tonight. I’ve been toying around with Gun Commando for a bit and so far it’s pretty much what I expected: a simple, but fun, frag-a-thon that’s a real throwback to the early days of FPS games.

When I talk about throwback, I mean that Gun Commando is like Doom ($4.99) or Wolfenstein 3D ($1.99) in that you’re aiming is fixed to a single plane, so you don’t have to worry about aiming up or down. This makes the game less complex, but also much easier to control on a touchscreen. The controls are still as fiddly as most touchscreen FPS games, and I’m sure a far cry from the actual dual-sticks of the Vita, but they get the job done fine. 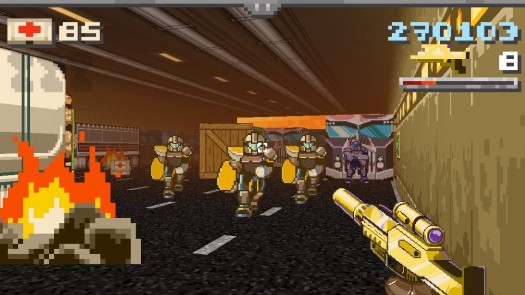 Graphics in Gun Commando are really simple, with blocky environments and textures, but it has a really cool stylized look that makes it feel like you’re playing an ’80s cartoon. The levels are simplistic and are all really bite-sized, which is well-suited to mobile. You aren’t likely to get lost working your way through them, but there are 3 trophies to search out and collect in each one and plenty of little secret areas to find that give you additional goals to shoot for.

By far the most interesting aspect about Gun Commando is its weapons system. Unlike traditional games where you where you can switch between the various weapons you run across in the game, here you’ll always start out with a base pistol and work your way up from there. You do this by landing shots into enemies consecutively, which builds up a meter in your HUD.

Each time you fill the meter your weapon levels up, turning it into a more powerful weapon. With every hit you land the meter notches up a bit, and when you miss it notches down a bit. This system is brilliant as it makes you focus on accuracy rather than just mashing the trigger willy nilly, but on the flip side I do miss the strategies that come with being able to choose your weapons and manage your ammunition.

The lack of strategies or complexity isn’t necessarily a negative in Gun Commando‘s case, especially for a mobile game. Its focus is on running around and blasting bad dudes, and I like it that way. It also has a really cool visual style and lots of tongue-in-cheek personality, and players in the forums seem to be digging it too. Gun Commando should land around 11pm EST, so throw this bad boy on your TouchArcade (Free) app Watch List and we’ll alert you when it hits the US App Store.