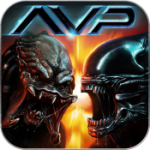 In late February Angry Mob Games, creators of Muffin Knight ($0.99) and Guerrilla Bob ($0.99) on iOS, released a new 3rd-person action game in the Aliens vs. Predator crossover universe titled AVP: Evolution ($2.99). In fact, Angry Mob had already proven their merit in working with this kind of IP with their previous dual-stick game Predators ($1.99), which was actually quite good.

Graphically, AVP: Evolution is very impressive, and it lets you battle through its campaign as either an Alien or a Predator. At first blush, though, it felt like nothing more than a mindless, button-mashing brawler. In some ways it actually is, and there’s nothing necessarily wrong with that. However, put a little time into learning the mechanics and there’s actually a very satisfying game here, and it’s one that players in our forums have been enjoying a ton since its release.

Yesterday Angry Mob pushed out the latest update to AVP: Evolution and it’s a doozy. Two new playable characters have been added, the Berserker Alien and the Chopper Predator, and each come with their own unique new abilities. There are some new missions to play through and secret areas to discover throughout the game’s campaign. Oh, and the Predator has gotten a couple of new weapons to add to his arsenal: a Shuriken and a Plasma Railgun.

Additionally, the combat camera has been improved, following up on some tweaks made to the camera and combat mechanics in the previous update. Difficulty has been adjusted as well, along with performance improvements so the game runs more smoothly on all the various supported iOS devices.

AVP: Evolution opens up as a pretty awesome action game once you’ve spent some time learning the ropes, and especially if you’re already an Alien or Predator fanatic. This new update keeps the good times rolling, so be sure to check it out.