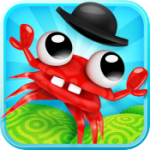 Pretty much every iOS gamer is familiar with Illusion Labs, and along with that most people know they are known for releasing high-quality and technically impressive titles. They don’t release games very often, but when they do, it’s almost a sure bet that it will be a winner.

Their latest title, Mr. Crab (Free), pretty much came out of nowhere this week, and true to form it’s a clever, beautiful, and challenging title that is worth your attention. Its titular main character is also stupidly adorable, as are the many enemies and environments you’ll encounter. Seriously, Illusion Labs, fire up a Mr. Crab toy line and I’ll be first in line.

Back to the game, Mr. Crab is essentially an auto-running platformer – but don’t dismiss it just yet, even though that descriptor fits hundreds if not thousands of games in the App Store. Mr. Crab‘s approach is really well done.

Picture a normal platforming level, with all the typical slopes, pits, and obstacles that impede your character’s progress. Now wrap that entire level vertically around a pole, and that’s how levels play out in Mr. Crab. Your character scuttles along on his own, and you merely control when and how high he jumps in order to negotiate your way around.

If you’ve played something like Wind-up Knight (Free) there are similar mechanics at play in Mr. Crab. Since you can’t change direction on your own, you’ll need to find walls to bounce against in order to travel in the opposite direction. This is required in order to collect the various bonuses like coins and pearls, as well as your stranded crab children, if you want to get the coveted 3-star rating for each level. Mr. Crab‘s levels are so well-designed that getting every objective is almost like a puzzle, and will take trial-and-error and paying attention to details to be successful.

There’s more to the Mr. Crab experience that we’ll touch on in our upcoming review, but if you’re itching for a new game to play then I feel pretty confident in recommending Mr. Crab already. I’ve been loving it since I picked it up on Wednesday, and our forum users have been really enjoying it too. It uses a simple one-touch control and can be played one-handed, two important factors for a mobile game. But it doesn’t feel dumbed-down because of it, and there is a ton of content to play through. Also, if you don’t like Mr. Crab’s huge googly eyes and buck teeth, well, then your heart is made of stone.