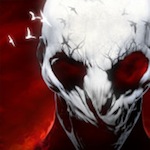 In a vaguely RAGE-like post-apocalyptic future where some sort of weird manmade oil has the power to turn dudes into zombies, a gigantic uh-oh sort of oil spill ends up turning a lot of dudes into zombies. So much for warning labels, right? These zombies ain’t your usual type of brain-diggers, either; their desire seems to revolve around beating folks up and then dragging them into the magical sludge, which now covers a tiny island chain you’ll be exploring in DeNA’s upcoming free-to-play first-person shooter The Drowning.

Not that there was much to it, but The Drowning doesn’t use its premise for much more than just an excuse to put you in the shoes of a scavenger who roams this little island in search of parts to various vehicles and guns in an effort to survive, keep moving, and maybe escape. For the most part, this is a hollow game; you’re tasked with little more than just moving from arena to arena, killing dudes and collecting random parts after the battle. The story is too lean to be a driver and the arenas too scripted and bland. You play an area enough, for instance, and you’ll learn exactly when and where dudes spawn.

Junk is integral to the experience. Progression is gated by junk. To get to new, harder arenas that drop sweeter junk, you’ll need to find junk parts to vehicles that can take you to the new place. Also, some monsters can’t be hurt by some weapons, so you’ll need to keep finding new junk to create better weapons, like hunting rifles, shotguns, and so on. With story taking a huge back seat to the arenas, it’s kinda easy to get burned out on the junk grind, though, the UI makes it really simple to identify the places you need to be to find specific pieces of junk.

You can get a taste of this in our look, which explore about 20 minutes of a New Zealand build of the game:

If you’re feeling froggy, you can buy more chances to collect that piece you need after a fight. You can also buy new weapons, as well as the gas you’ll need to get places. If you build a new weapon, there’s timers you can skip, too. In just about every nook and cranny, there’s a “hey buy this" element to the experience.

Because of how insanely integrated all the free-to-play systems are, it’s easy to overlook just how great the game feels as a shooter. Straight-up, this thing has the best and most brilliant control scheme I’ve ever used on iOS. With one hand, you tap on the environment to steer your dude around, while swiping to look. Solid prediction and some mean, mean pathfinding make this a breeze. You can also backpedal while moving if you hit the reverse icon. Shooting requires a two finger tap in which you kinda treat your digits like a crosshair. Whatever’s in the middle of them is where the bullet goes — reliably, no less.

This system sounds convoluted and it certainly looks whacky when you watch someone put it in motion, but it’s super easy to learn and get comfortable with. It took me around three or four minutes, actually, which is nuts since I’ve never played a shooter that has done anything similar. I don’t play shooters on iOS because of whacky virtual button schemes, but I keep flipping on this one to enjoy the shooting. It’s wild, man.

You might find yourself in a similar spot when this game launches — not digging the free-to-play shenanigans yet somehow glued to the game because the shooting mechanics are so good. That’s not a bad since the value proposition is as low as it is, so consider checking it out when you can. This thing is a trip and, hey, maybe it’ll actually hook you, too.