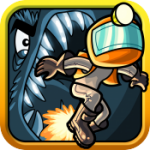 To coin a phrase from a popular comedian, what is the deal with the characters in these running games? Why are they running? What’s the rush? You know, you could’ve snagged that coin tucked away behind that pillar back there if you would’ve just eased on up to it. The terrified spaceman you play in Worm Run (Free) has a valid excuse. He’s on the move, and needs to stay that way, because a giant worm is plunging after him, devouring everything in its path. Glance back and you’ll see him, eating his way through stone and dirt and steel.

Worm Run throws a few wrenches into the endless runner formula. It’s endless, but doesn’t pump your legs for you. You do that by swiping. Swipe left and right to run, swipe up and to either direction to jump, and so on. The control scheme sounds simple enough, but it didn’t gel with me at first. Holding my phone in my right hand, I used my left pointer finger to swipe. The tutorial didn’t nudge me toward or away from any particular pose, so I went with that. It wasn’t comfortable. My wrist cramped from holding the phone, and swiping with one finger didn’t give me the precision I needed to hop up into narrow shafts. 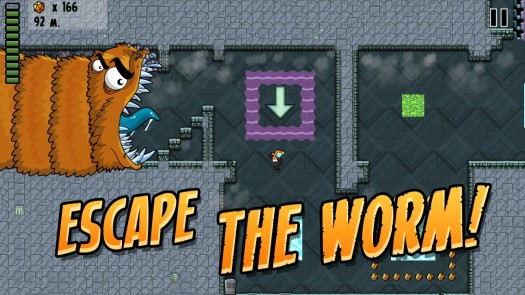 Then, a breakthrough. I held the phone like a controller and set my thumbs on the lower corners, as if I were playing a dual-stick shooter. To jump, I slashed my thumb over the screen and used my left thumb to maneuver my runner in midair. Wall bounding was a treat. You slash up and to the direction you want to jump, so I put both thumbs to work and rocketed up vertical shafts as if I’d been shot from a cannon. And running? Get both your thumbs in on the swiping and not even the world’s most famous hedgehog will be able to keep up.

I’m not sure if Golden Ruby Games intended for me to stumble upon the optimal way to play, but their game went from serviceable to an absolute blast the instant I learned how to crank my little runner’s speed up to 11 and positively fly. Get going fast enough and you can even run right over all but the largest pits. The sheer act of moving is a joy in Worm Run and a huge leap forward from the simple steering mechanic used in most auto-running runners.

Next to movement, the worm is perhaps the most enjoyable element of Worm Run. The cartoony creature isn’t terrifying, and it isn’t meant to be, but when my screen started shaking and I caught a glimpse of a fuzzy body drilling through the earth toward me, I gripped my phone a little tighter and swiped a little faster. Items along the way such as bombs that stun the worm and ice cubes that freeze the ground buy precious time, and you can unlock other handy tools such as a magnet that sucks up coins for you.

You’ll barrel through many different environments in your mad dash, and the terrain gets trickier as you go. You can collect coins spread around each area, but they’re usually just far enough off the main road that sparing a second to grab one allows the worm to sate its voracious appetite. Ah, and thus your dilemma: stopping for coins is risky, but you can use them to buy a revival when the worm finally swallows you whole. Venturing off the trail to stock up makes for tense “GO! GO! GO!" moments in later, more congested areas–and venture off you likely will, since reviving gets pricier the longer you play.

For just a dollar, Worm Run almost sells itself. Its lightning-on-ice movement speed and motivation to keep on trucking in the form of a gigantic carnivorous beast make for a nice alternative to the droves of autopilot runners available on the App Store.