Picture Super Mario Bros. Got a nice image in your head? Good. Now imagine Mario could never stop moving and would only change direction if he hit a wall. A little tougher. And what if absolutely everything could kill him in one hit, and there was no such thing as a checkpoint? That sounds like the sort of game that would have you cursing, spitting, and contemplating throwing your controller, and it also sounds a lot like Wind-up Knight [$0.99]

Occasionally a game will come out on Android that looks so good I slaver for a port. Wind-up Knight is one of those games. Released on the Android Market a couple months back, the side-scrolling adventure looked slick, adorable, and hard — all the things I look for in a platformer. Now that it’s arrived on iOS, I can finally confirm: this game is outstanding.

Like the Energizer Bunny, the wind-up knight keeps going, and going, and going. The only things he’ll stop for are death and the end of a level. Otherwise he’ll keep going one way until he hits a wall, and then he’ll turn around and go the other way until his little clockwork bits wind down. Really, it’s just another way for the poor fellow to die.

Not that there’s any shortage of deaths to be had. Pits will get him, and must be jumped. Some need to be double jumped instead, but the wrong choice will again mean death. Then there are the rocks that fall from the ceiling. Those need to be blocked with a shield. Sometimes there are monsters, and they must be slashed or, occasionally, leapt over. And quite a lot of the time there will be spike walls or other obstacles perfectly placed at head height. Rolling will solve those. 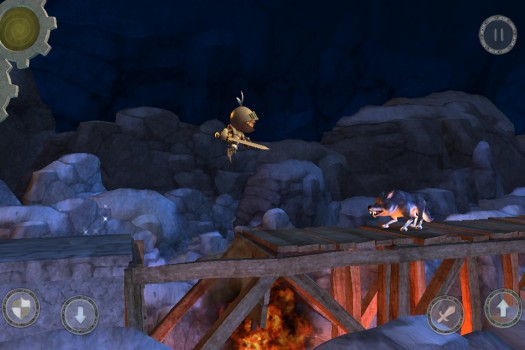 Each of those commands is placed on a virtual button beneath one of your thumbs. They’re spaced out comfortably, so you’ll rarely mix them up. Precise controls are absolutely vital, because Wind-up Knight demands perfection. To complete a level, you have to be able to dodge, slash and block absolutely everything. Every obstacle is telegraphed in advance with coins or other indicators, so you’ll never be completely surprised. Expect, however, plenty of do-overs, because seeing, processing and reacting correctly is a skill that takes practice. Knowing the level is half the battle.

But completing all 48 levels isn’t the end. True knights need to master every single level. That means collecting every single coin, and finding the hidden card in every level. You can’t always do both at once, since finding the card usually means taking an alternate, secret path that skips over some coins. So you’ll be seeing each level a few times. 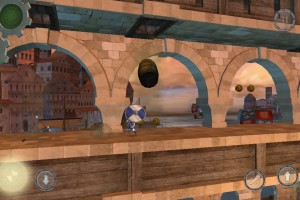 There are good reasons to keep going back. Collecting full suits of cards unlocks special equipment. Collecting most of the coins in a level will give you an A rank, and earning A ranks throughout an entire chapter unlocks an uber-difficult Knightmare level. Collecting absolutely everything will give you S ranks across the board. If that gives you anything other than bragging rights and a valuable Game Center achievement, I don’t know about it — there’s not much chance I’ll ever get that good.

I’m happy to keep trying, despite the many, many replays I undertook to make it through the main game. The presentation on display in Wind-up Knight is top notch. The game runs as smooth as silk (thankfully — any slowdown would be murder). The music is compelling, and changes by chapter and tone. The knight himself is adorable, and the environments he travels in are lovely to look at. Even the menus look great.

You might be turned off by the presence of IAP. You probably shouldn’t be. You can purchase Notes, needed to buy pieces of equipment. Most of the equipment is unlocked by playing the game. You can afford more with the Notes you earn in the game, though there’s no opportunity to grind them. If you want to have absolutely everything you will need to pay, but the equipment just offers small advantages for certain situations. It’s closer to a set of cheats than actual gear.

While there’s no true story to speak of, there is a loose narrative to be discovered. I’d rather not get into details, because its slow reveal is one of the things that charmed me most about this game. I’d hate to spoil that experience. Suffice it to say that you should pay attention to the tips while loading each level. I’ve rarely seen them used to such Machiavellian effect.

Wind-up Knight was worth the wait. Though it can be extremely frustrating, it rewards the player who pushes through the painful parts. Each time you replay a level you’ll learn more, memorize more, become better at the game. The rush you’ll get when you finally reach the end of a challenging level is worth the trouble, every time. So get this game. When you’re too frustrated to go on, take a break and visit our discussion thread; let us know what you think.