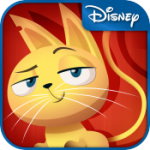 I don’t know about you, but I think Disney’s foray into mobile games might have yielded some of the most creative work of its recent years. Ignoring of course the companies they own, the Mouse House has been seen as lagging in both the movie and videogame departments for quite some time. As anyone not living in a sewer themselves knows, that all changed with the release of Where’s My Water? ($1.99) For the first time in…well…ever, a new Disney icon had been created at the videogame level first, and the company seemed to be using mobile to kick off an upswing in the quality department. So naturally, with an alligator as their new face of gaming, they’d follow things up with…a fluffy kitten. Wait, what?

If Mittens ($0.99) – from its seemingly detached concept to its unexpected existence – has you skeptical, you’re not alone. Heck, in our TA Plays for the game, Brad drew some early conclusions about the way that the experience seemed like it was playing things disappointingly safe both from a mechanical and creative standpoint. Having now cleared through all of the game’s levels and its available bonus pack, it seems that like its in-game collectibles, this one might just be a gem after all. As with the title’s titular feline, though, players may go through ups and downs along the way. 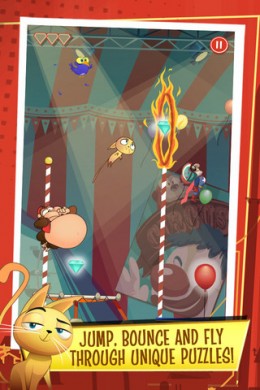 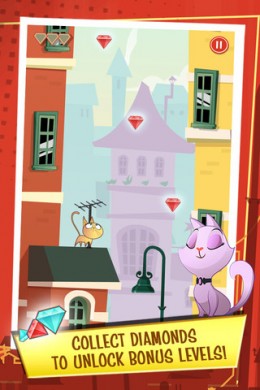 The thing is, where Swampy brought with him not only a novel concept but a slew of memorable levels – each of which felt like it had a distinct theme and purpose – Mittens meanders much more on its way to eventual greatness. As with any physics puzzler, the basics are covered in the first few levels of each zone, with the core concept revolving around the need to swipe and tap our brave kitty to safety on a quest to impress his true love. Unfortunately, this introductory mindset seems to bleed into a large portion of the game’s first fifty levels, with many of them feeling like indistinct, unmemorable versions of one another.

You know that sense you get when a new level in a three-star puzzler feels vaguely like a rearranged version of the one you played just far enough back that the game thinks you forgot it? Yeah, it’s that.  All the trademark elements are in place, including sliced ropes, last minute drops onto bouncy objects, and risky collectible snagging – painted with a Disney polish that ensures everything feels smooth and precise. Yet for all its emphatic not-badness, there’s a lingering feeling of ho-hum in the first two zones that’s hard to shake. A sense that Disney might be trading in slightly on its newly minted supremacy in the genre, doing far less than they could to justify a purchase. 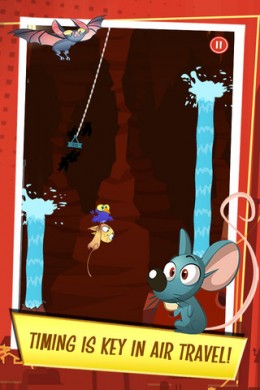 The yin to this more reserved yang, however, comes in the form of the levels that appear towards the end of each zone, as well as almost the entirety of the game’s third area. Reassuringly, Mittens does eventually step out of the genre’s comfort zone to deliver a much fresher take on a well-trod play style. First appearing as five bonus levels that are unlocked as you collect gems, these more complicated stages feel like a wonderful mix between Amazing Alex ($0.99) and Cut the Rope ($0.99). Each one  departs from the “tap here, swipe this" feeling, instead forcing you to navigate landscapes already full of motion, and piece together the perfect timing needed to play your role as the little furry cog in a miniature machine. Better still? They tie together wonderfully and make up for the feeling of detachment prevalent throughout earlier levels. My particular favorites are the five final circus big-tops of the second zone, that culminate in a brilliant level full of tightropes, cannons, and miniature cars.

And while the last zone and the game’s much tougher (and more imaginative) harbor zone continue this trend, I can’t help but wonder why it feels like it takes almost half the game to get there. Drawing further attention to the game’s design foibles is a seeming lack of effort in  – of all areas – production values. Mittens’ is completely without stage music save for a repetitive chime at the end of a level, and the cut scenes that exist to punctuate play pale in comparison to the subtle, endearing storytelling achieved in Where’s My Water? Except for grating meows when you fall into blackness or foul up, the titular kitty lacks all semblance of a personality, and it proves nigh-impossible to invest in the game beyond the compulsive desire to beat its levels.

This, perhaps, is the predicament I’m having with Mittens. You’d be hard pressed to call it bad by any stretch, and about half way through, it manages to take off in ways not hinted at in our TA Plays video to become a pretty wonderful take on the physics puzzler. At a dollar, and with a future that will doubtless be filled with more content, fans of the genre would be hard pressed not to pick this one up. At the same time, however, it’s more than a little disheartening that Disney seems to have followed up their return to form with a return to safety, and I don’t think it’s unreasonable to expect more than a competent time-killer from a studio of their pedigree.

Like a top notch student handing in a rush job, Mittens sags not under the weight of what it does wrong, but all that it could have done much better.